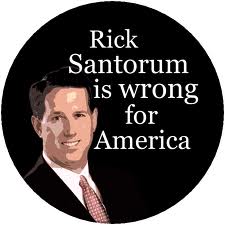 Santorum: Wrong for America
If there is any doubt that some of the Tea Parties have been co-opted, let there no longer be any doubt. Recently, I received an email from a Tea Party organization championing the cause of Rick Santorum entitled, Rick Santorum, It is Now or Never. Excerpts from the email follow:

From: RE Tea Party <info@re-teapartyonline.com>
To: thecommonsenseshow@yahoo.com
Sent: Wednesday, January 4, 2012 5:07 AM
Subject: Rick Santorum: It's Now or Never

It's Now or Never for Conservative voters. We can either unite now behind one candidate and have a conservative standard bearer in 2012, or have the GOP establishment choose another moderate Republican who will have a difficult time defeating Barack Obama in November.
I need an URGENT contribution of at least $35 today to unite conservative voters and win the Republican nomination.

Are you kidding me Tea Party, Rick Santorum? All but one of the Presidential candidates, including Santorum, Gingrich, Romney and Obama, support global governance, more bail outs, socialized health care complete with death panels, continuing the Federal Reserve madness, the public theft of private pensions, attacking Iran which will result in WWIII and openly advocates for carbon taxes and skyrocketing utility rates. Hey Tea Party, how does this help the American middle class?

When is American going to realize that anyone that the mainstream media and its grassroots organizations (e.g., Media Matters, etc.) endorse is owned or controlled by the Wall Street Banksters and their goals are patently antithetical to traditional American notions of governance? This is why all but one of the current Presidential candidates seeks governmental control over the internet.

The Tea Party support of the globalist Santorum leads me to believe the rumors of some of the Tea Party being co-opted are true. To the Tea Partiers who sent me this communication, do you really think you will have a seat at the Wall Street New World Order table for global governance? Or, is it more likely that you are just useful idiots?

Great article. Too bad it doesn't pass the proofreader.