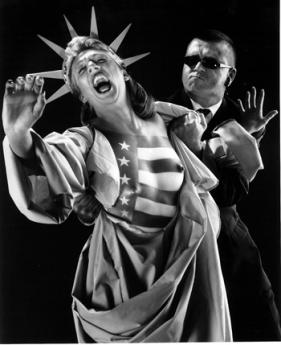 Freedom: An Endangered Species in America - by Stephen Lendman

Last September, marking the 9/11 tenth anniversary, the ACLU published a report titled, A Call to Courage: Reclaiming Our Liberties Ten Years After 9/11."

Who then could have imagined America engaged in:

• military commission trials, including for US citizens;

• indefinitely detaining US citizens in military prisons on spurious terrorist connection allegations; and

Political discourse is now "driven in part by a wholly contrived 'debate' over whether" fabricated terror threats require "military" or "law enforcement" responses.

Advocates for the former call it muscular and the latter anemic and irresponsible. In fact, post-9/11 policy hyped bogus terrorist threats and degraded rule of law protections for everyone.

Near the end of the Cold War, former Supreme Court Justice William Brennan commented on "the shabby treatment civil liberties have received in the United States during time of war and perceived threats to its national security."

When each crisis passed, hindsight "remorsefully realized that the abrogation of civil liberties was unnecessary." Ten years post-9/11, political Washington hasn't yet crossed that threshold.

In today's climate of fear, conflict resolution "is a distinct abstraction, not an actual event." Bipartisan leaders claim today's conflicts "take place everywhere and last forever." As a result, what chance have freedom and justice?

On September 18, 2001, a joint House-Senate Authorization for Use of Military Force (AUMF) approved "the use of United States Armed Forces against those responsible for the recent attacks against the United States."

A decade of war followed. On May 26, 2011, the House gave Obama and all future presidents more war authority than Bush by permitting conflicts anywhere for any reason or none at all.

In fact, Obama doesn't need it. He already wages war on humanity abroad and at home in violation of international law and constitutional provisions and protections.

As a result, permanent war is policy. Nations are ravaged one at a time for wealth, power, and unchallengeable dominance.

Spurious existential threats are claimed. Fundamental values are discarded, including due process, habeas, equity, and justice, as well as other inviolable international and US law.

From inception, Guantanamo "was a laboratory for unlawful military interrogation, detention, and trials." All US torture prisons symbolize imperial lawlessness.

Candidate Obama said Bush officials "compromised our most precious values." As president, he exceeded the worst of his predecessor. Rule of law principles no longer apply. Freedom hangs by a thread. Anyone considered threatening is guilty by accusation. So are nations earmarked for regime change.

"No national security policy raises a graver threat to human rights," international law, and peace, "than targeted killing, because the government claims the unchecked authority to impose an extrajudicial death sentence on" anyone anywhere for any reason or none at all.

So did total abandonment of international and US law. Promising a new course, Obama exceeded the worst Bush policies.

"How could this have happened in America? The answer....involves secrets and lies, moral cowardice and legal sophistry."

"Dark side" lawlessness was instituted. Prisoner abuse depravity became policy. Torture prisons proliferated. Guantanamo is one of many. Innocent victims are called "bad apples" or "ticking time bombs." Public debate is absent. So are legal considerations, morality, and other right and wrong issues.

Conspiracy is invented to "create an impenetrable circle of impunity." Everyone involved is culpable, but no one's accountable. Congress, the administration and courts share blame. So do media scoundrels through silence, misreporting, or supporting lawless policies.

"Today, we have a state of affairs" that shames the nation. No victim of America's torture policy had his or her day in court. "And not a single court" handling torture suits "addressed the core question of whether the victims' legal rights were violated."

Under Obama's indefinite detention law, everyone's at risk. Dark side justice threatens them. Congress overwhelmingly agrees. Criminal accountability no longer matters. Neither do constitution rights, including Fifth Amendment protections, stating no one shall "be deprived of life, liberty, or property, without due process of law."

Post-9/11, America had a choice. It embraced lawlessness, not rule of law principles and justice.

They became scapegoated for their faith, ethnicity, and other reasons or none at all. They're targeted, arrested, convicted on bogus charges, given long sentences, and incarcerated as political prisoners.

Washington uses "religious, racial, and national-origin profiling as one of this nation's primary domestic counter-terrorism tools, even though experienced intelligence and law-enforcement officials agree that it is ineffective, inefficient....counter-productive," and lawless.

Checks and balances are absent. Police state surveillance is policy. Warrantless wiretaping and other privacy invasions were instituted. Whistleblowers are targeted and prosecuted. Freedom's under siege.

Data mining is one of many lawless practices. It's based on the spurious notion that "terrorist patterns" can be determined. State and local authorities now replicate federal policy. Everything's done secretly.

Its entire character changed. Freedom's now endangered. Dissent can be criminalized. Imperial lawlessness is policy. So is police state justice. After enacting indefinite detentions of US citizens, tyranny arrived in America.