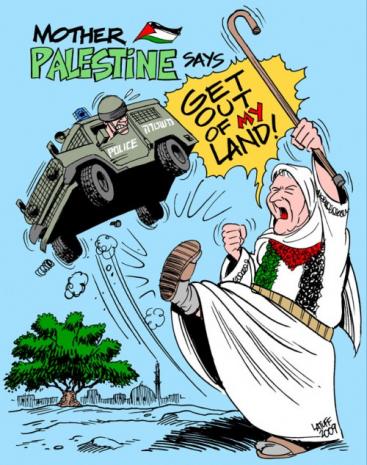 Calling the current situation "dangerous" she said Israel's "dragging the region into the abyss." As a result, urgent EU help is needed "to end the occupation."

EU nations know their obligations under international law, including Geneva's Common Article 1. Requiring all nations enforce them, it states:

"The High Contracting Parties undertake to respect and to ensure respect for the present Convention in all circumstances."

So far, EU nations, like America, provide one-sided support for Israel. Palestinians must rely on their own will as one people united for liberation in peace.

"To Tunisia we say: It is us today who are going to build the new Middle East."

"Our country is more important than partisan interest. We need a transitional period. We hope it will not be long until we can cooperate."

"The enemy proved to be criminal and it will not give us our rights unless we make a perfect strategy. We have to mobilize our diplomacy, media and resistance to get more international compassion, political support and emphasis on unity."

"We have a fateful battle today. We are facing an enemy which fortifies its attack on us and on our land, and continues Judaizing and stealing our lands. It refuses to give us back our rights and denies them. It leaves us no choice, and the world is not doing us justice and is watching the situation silently and helplessly."

In the past week, Palestinian fishermen were violently assaulted. Seven were arrested, their boats confiscated. Incidents like this happen regularly. Gazans in their own waters aren't safe.

They're attacked, arrested, and prevented from fishing legally. On January 7, four fishermen were interdicted. They were fired on, forced to undress, and swim to a nearby gunboat in frigid waters. They were taken to Ashdod, blindfolded, handcuffed and questioned.

Earlier on December 29, three others were assaulted, arrested and terrorized. Khan Yunis fisherman Nabeel Ahmed Mahmoud al-Henawwi said he and two others were forced to stay in frigid waters for 20 minutes. Extreme cold affected them.

Since 2000, Israel denied Gazans the right to sail and fish freely. Oslo permits them within 20 nautical miles. Israel arbitrarily reduced it to 12, then six, then three, and for those interdicted, zero. As a result, fishermen lost 85% of their livelihoods. Those whose boats were confiscated lost everything.

They agreed to transitional governance ahead of parliamentary and presidential elections within a year.  Currently they're scheduled for May. Once held, both sides will join the PLO as Palestine's legitimate representative.

"What happened is that they refused to wait a short period of time while the security forces at the checkpoint contacted their superiors. The wait did not last more than 10 minutes. We don't prevent anyone from entering."

Few details are known. However, an unnamed PA representative said no progress was made. Palestinians responded to Israel's 22-article document given them after two days of talks.

"The changing factors around us are in our favor," not Fatah's. It's their choice now. "If Fatah wants (unity) accomplished, we will be ready. It they do not, then we are sitting here and the future is ours."

"What is coming is a thousand times better than in the past." It includes "the liberation of (Palestine) and the return of" refugees."

He and other Hamas leaders warned against talks with Israel. Spokesman Sami Abu Zuhri called them "a repetition of a track that had failed over the past years." Others accused Abbas of bowing to Washington and Israeli pressure at the expense of Palestinian liberation and popular rejections of a policy sure to fail.

Political prisoner Fatah leader Marwan Barghouti  is Palestine's most esteemed figure. He called pursuing talks with Israel useless. In a letter he said, "there is no point to make desperate attempts to breathe life into a dead body."

He urged popular resistance instead. So do others with growing support on their side.

Popular Front for the Liberation of Palestine (PFLP) leaders warned against futile talks, calling them a "grave political mistake." They also called on Abbas to focus on reconciliation and unity.

"Israel's attitudes are clearly announced and well-known, and such meetings just give the Israeli government more time to avoid international pressure because of the obstacles it is creating on the ground."

Palestinian hopes for liberation and peace remain distant but achievable. Unity and resistance are key for progress.

Palestine's rising. Israel makes more enemies than friends. A threshold of no return awaits to be crossed. Palestinian patience will pay off.

It's worrisome in hands of extremist ones. They're to use it to commit violence, including against soldiers sent to evacuate illegal outposts. Settler ideologues have close contacts with like-minded IDF sources.

Settler ideologues attack them with impunity. They block roads, stone cars and homes, torch fields, uproot trees and other crops, and commit other forms of vandalism and violence, including murder. Since September 2000, 50 Palestinians were killed. Since December 1987 (the first Intifada's onset), it's 115, besides many more injured, including children.

They also torch mosques, eight since 2008. On December 15, the Palestinian Center for Human Rights (PCHR) "condemn(ed), in the strongest terms, the criminal arson attack on two mosques" in West Jerusalem and Burqa village near Ramallah.

Settlers get carte blanche freedom to commit violence with impunity.

Imagine if rogue gangs and police colluded in US cities to commit similar offenses. Targeted groups would know what Palestinians face daily.