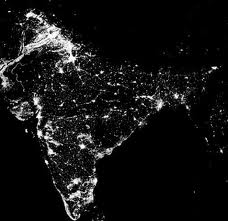 Quick, what country is the economic engine that will power world growth? If you answered "China," you're far from alone. But there's another country that deserves as much attention and better yet, is much friendlier to investment: India, home to 1.2 billion people. To electrify all those houses, power the industries that keep all those people employed, and fuel the vehicles that more and more Indians own, India's energy needs are shooting skyward.

First question to consider: what kind of energy does India need? Just about every kind, really. India encompasses significant reserves of coal, oil, and gas, but each year it has to import more and more to meet its rapidly rising demand. Domestic production increases have been hampered by land disputes, interminably slow permitting, and government-regulated pricing mechanisms that discourage development.

That's got to change if India wants to keep up, and its government knows it. Domestic supplies always come with better reliability, better prices, and other benefits that we can shorten into two words: energy security.

So India is reaching out to foreign oil majors, quietly setting up deals to exchange stakes in giant, underexplored oil and gas fields for the technical expertise it needs to best develop these resources. These partnerships are working into place slowly. However, they show Delhi is serious about the welcome mat it rolled out in 2000, when it passed a policy that allows foreign companies to own 100% of any oil and gas assets they may want to acquire for exploration and development.

And what we really like is that explorers are welcome in a democratic and reasonably friendly country that harbors none of the risk of asset nationalization that clings to other underexplored locales, like Venezuela.

Oil demand in India is set to rise some 4% annually for the next decade; natural gas requirements are expected to climb 10% per year for the next five years. Put together, India is a place that desperately needs more energy, has resources and reserves to exploit, and is working to encourage foreign investment in them.

We're ready to take India up on the offer, so let's learn a little more about its circumstances and potential.

In the 1990s, as India's growth was beginning to snowball, Delhi realized the country needed to look abroad for expertise to shorten its learning curve and for capital to fuel it. Accordingly, the government wrote policies to attract foreign investment. The one we mentioned above is called NELP, for New Exploration Licensing Policy, designed to even out the playing field between national and private companies. India's oil and gas industry has traditionally been dominated by state-owned companies.

With NELP enabling foreign companies to own oil and gas assets, Delhi next needed to develop a fiscal structure. What they chose is a PSC (production-sharing contract) system, and it's not a bad one – not as favorable as the UK North Sea, but not Iraq either. (Governments set up different ways to collect what they consider their share of income from the development of their resources. In India, companies that find oil or gas – and are not state-owned – have to negotiate production-sharing contracts, or PSCs, with the government. PSCs designate a portion of production for companies that they hope will offset their expenses. Beyond this "cost oil, " any "profit oil" is split between government and company, according to the terms of the all-important contract.)

India is the world's fourth-largest oil consumer, trailing only the United States, China, and Japan. The country has 5.6 billion barrels of proven oil reserves, but production averages just 761,800 barrels per day (bbl/d), about the same that it did 25 years ago.

In contrast, the country's consumption has more than tripled in the same period. It currently consumes about 3.1 million bbl/d, and it relies on imports for 70% of that. No government in its right mind would like this trend.

India's oil sector is dominated by state-owned enterprises. The largest oil company is the state-owned Oil and Natural Gas Corporation (ONGC), followed by state-owned Oil India Limited (OIL). The NELP system has opened up opportunities for other companies, however, and India will need that foreign investment and exploration to boost domestic production.

The country is working the other side of the street as well to meet its energy needs. Indian national oil companies have bought stakes in international projects in recent years, aiming to gain control over some non-domestic supplies. For example, the international arm of ONGC has oil and gas operations in 13 countries including Vietnam, Russia, Iran, Iraq, Sudan, and Brazil.

Indian companies are also opening up to the notion of partnering with global firms, as we mentioned earlier. While no state-owned companies have inked major partnerships as yet, privately owned Reliance Industries Ltd signed a US$7.2 billion deal with BP (NYSE.BP, L.BP) in August. Reliance sold BP a 30% stake in 21 exploration blocks and is now using the British energy giant's expertise in deepwater drilling to revamp its plans around exploration and boosting production from its operational fields.

This first major deal could well act as a model for future exploration partnerships in India. Companies know that international partners can bring valuable expertise, especially with respect to increasing output from mature fields.

One aspect of India's oil sector that needs adjustment is its subsidy system. The government subsidizes prices of domestic oil products to help disadvantaged Indian consumers. But requiring its national companies to sell their products at reduced prices regularly forces them into major financial losses – more than US$23 billion in fiscal 2010-2011 alone, according to the International Energy Agency.

And the subsidy situation only gets worse as the rupee depreciates. Global oil costs have eased some 8% this year, but the rupee's 9% slide against the dollar has wiped out any cost savings. The oil minister said recently that every one-rupee decline in the Indian currency against the dollar increases annual revenue loss for the three state-owned refiners by 80 billion rupees, or US$1.6 billion.

No easy solution for this issue, unfortunately. Clearly, raising prices for Indian consumers would carry a heavy political price. But just as clearly, the Indian government cannot continue subsidizing oil prices at this level for long.

When it comes to India and natural gas, the question is really one of keeping pace with electricity demand. The country was gas self-sufficient for years, but economic growth turned it into a net importer in 2004 despite steady increases in production.

Even imports are not enough: According to the World Bank, roughly 40% of residences in India are without electricity, and blackouts are still common in main cities. Import needs have climbed by an average of 35% annually.

Natural-gas demand in India is projected to grow 10% annually for the next five years as the country works to diversify away from a reliance on coal, which currently generates 70% of India's power.

Several large natural-gas deposits have been discovered in India over the last few years, primarily offshore in the Bay of Bengal. But demand will continue to outpace production for the next several years at least. For one thing, Reliance's huge KG-D6 field – its first offshore field – is producing 20% to 40% less gas than expected, a problem that will take even its new partner BP at least three years to reverse.

Then there's the subsidy issue again. Some gas finds are being left undeveloped because the regulated price of natural gas is simply too low to justify the cost of developing the field. The price more than doubled in May 2010, but US$4.20 per MMBtu is still only one-third that of the open market in Asia.

The country is trying to add infrastructure to help meet its growing import needs, but it's running into hurdles here, too. A variety of economic and political issues keep delaying the Iran-Pakistan-India pipeline, under discussion since 1994. Similarly, India is the planned endpoint for the Trans-Afghan pipeline from Turkmenistan, but work is yet to begin due to concerns about route security and the adequacy of Turkmen supplies.

A liquefied natural gas (LNG) terminal has made it to construction phase, adding a third to two already in operation in India. Long-term growth demand for LNG in India remains unclear, however, because… you guessed it… that gas subsidy means domestic gas is notably cheaper than imported LNG.

[Whether India attains greater energy independence or not, the US is facing a dire energy situation – one that will be challenging for energy consumers and profitable for savvy investors. Learn how you can be one of them.]