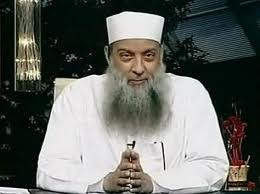 EDITOR'S NOTE: This man has also stated that non-Muslims could be taken as slaves.

The above clip was taken from an interview given by Shaykh Abu-Ishaq al-Huwayni on the Egyptian satellite television station al-Hikma on July 7, 2011.
According to Translating Jihad, al-Huwayni explains that whoever insults Muhammad, even if he later repents, must be killed. Later in the interview, al-Huwayni went on to contrast this with the case of one who insults Allah. He said that insulting Allah of course makes one an infidel, which is allegedly agreed to by all Islamic scholars, yet the one who insults Allah is not killed--he is merely called to repentance. This is because even if the whole world insults Allah, it does not matter to him--it does not hurt him.
After recounting a hadith regarding Muhammad being mocked by poetry from the Quraysh, al-Huwayni explained that Muhammad "had complete authority to waive his right (to kill those who mocked him). But the ruler does not have the authority to waive the Prophet's right." Al-Huwayni reported that Muhammad could waive this right whenever he wanted, but after his death he retained this right, meaning no one could waive the right for him. That is why those who insult the Prophet now must be killed.
Al-Huwayni then narrated another hadith in which Abu-Bakr, the first rightly-guided caliph of Islam, became furious with someone who had mocked him. Abu-Barza offered to kill this man for Abu-Bakr. Abu-Bakr explained, however, that this right (i.e. to kill the one who mocks the ruler) was not given to anyone after Muhammad; or in other words, only Muhammad had the right to kill those who mocked him.
The Shaykh made this statement in the context of the current controversy in Egypt with the Christian businessman Naguib Sawiris, a billionaire and founder of the Free Egyptians Party. Late last month Sawiris tweeted a picture of Mickey Mouse wearing a Muslim beard and jilbab, and Minnie Mouse wearing a niqab, which was considered to be mocking Islam. Al-Huwayni did not say explicitly that Sawiris should be killed for mocking Islam, but did say that all of his companies should be boycotted, even if he only owns 10% share in the company

2 Comments in Response to Egyptian Shaykh: "We still kill him, even if he repents!"

I would agree with you. Muslims say one thing to their own, and another to those they consider to be infidels. Just look at President Obama! All the lying he has done. Right from the start his policy was "Out of Iraq" and "No more wars." Look at how he has become the worst liar of them all!

But it ain't only the Muslims. Muhammad, himself, in starting Islam, did it in part because of the lies of the British and other European business people and countries. He saw how the Europeans were screwing the Arabs, and he didn't like it. Of course, part of the reason he didn't like it was that he wanted to be top dog in the screwing of his own people!

So it seems that everybody who gets out into the big public, and starts talking to people in a big way, is really trying to screw them... everybody except Ron Paul, that is.

That is just one of tons of videos showing how Muslims say one thing in English to ignorant infidels, and another to their own in Arabic, namely, the jihad is back on, let's get off to a good fast start spewing hate and death threats.

Muhammad set the example for Jihad, namely, the Three Stooges, er, Stages, where when they are in a minority they play the infidels off for their weaknesses, demanding multiculturalism and tolerance, like our Muslim president Obama now does.  When their numbers grow, then the "bad Muslims" begin terrorism, while the rest of the "good Muslims" claim they are perverting their religion of peace.  When the numbers reach the final countdown, it's total bloody takeover, and the imposition of Sharia, which makes infidel survivors lower than the manure in a cow field, forever, ending freedom permanently.  The United States of America is the world's last best hope for freedom against Islam as well as every other freedom-hating ideology.

Too bad, this is the so-called religion that our president extols the virtues of every chance he gets, while negotiating with the Taliban and Muslim Brotherhood, who are dedicated to destroying our entire way of life, when he should be snubbing them at the very least.

Learn about the Three Stages of Islam from this cool video and you'll not be a softie anymore:

Master the modern Muslim world and its recent history including all the zanies free in your browser with the Historyscoper and enjoy the first year where you pretty much understand what's happening:  http://tinyurl.com/muslimscope

The moral difference between the Christian and Muslim worlds

Revealed: Your own identity carries divine 'name of God'

The Spiritual Reawakening For Human Supremacy

A Spiritual Aspect To Covid That Many Miss

The Depths of God's Love

Message to the Christian Churches