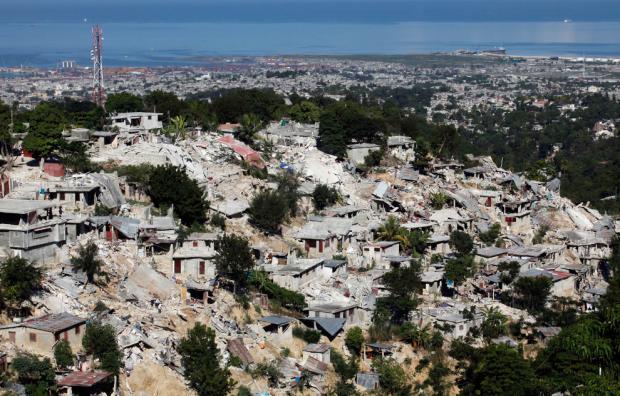 On January 12, 2010, Haiti experienced a calamitous earthquake. Port-au-Prince was devastated. Property destruction and damage were extensive.

As many as 300,000 or more died. Many others were injured. Impoverished Haitians enduring crushing hardships lost everything, including loved ones.

Over half a million survivors endure appalling conditions in hundreds of makeshift camps. They remain homeless, struggling to survive.

"The problems facing Haiti are vast, if not insurmountable, in the short term." Hundreds of thousands who lost everything live in legal limbo. Cholera's devastating thousands. Culpable UN Blue Helmets won't accept blame.

Understated reports show 7,000 deaths and over half a million infected. True figures may be double or more. UN Haiti chief humanitarian officer said:

"What we are looking at in Haiti is not just recovery from the earthquake. It's not just dealing with a cholera epidemic. Those came on top of a country which was structurally broken" by neglect, persecution, and exploitive US dominance.

One victim told AFP, "My hope is God, not the leaders of this country" who've done pathetically little to help.

Its new report headlines, "Children of Haiti: Two Years After - What is changing? Who is making the change?" saying:

"The outlook at the start of 2012 appears bright. Positive progress in the public sector is matched by optimistic forecasts for private sector investment, bringing a much needed boost to the local economy."

"The vulnerability of the population remains high, primarily as a result of stark gaps in" social services.

The report claims over 750,000 children back in school, including 80,000 in "193 safe, earthquake-resistant schools constructed by the organization. Over 120,000 children enjoy structured play in one of the 520 child friendly spaces."

Efforts to improve child protection included "the first ever Directory of Residential Care Facilities." Over 13,400 children were registered.

According to UNICEF's Francoise Gruloos-Ackermans:

"Make no mistake: the country remains (in) a fragile state, beset by chronic poverty and under-development. Its weak institutions leave children vulnerable to shocks and the impact of disaster."

Adults fare no better, especially those disabled, the elderly and ill, as well as women and young girls vulnerable to rape and other sexual abuse in camps.

"A United Nations analysis showed that" almost all aid went to private contractors, international agencies, and predatory NGOs. They exploit Haiti for profit.

"Despite billions of dollars" in pledged aid, "reconstruction efforts remain painstakingly slow, with only incipient signs some progress are taking hold."

Port-au-Prince rubble shows what ordinary Haitians face. "Few new or renovated buildings can be seen. And throngs of Haitians line the streets every day in a jarring reminder that (80%) of the population is either unemployed or underemployed."

Prime Minister Garry Conille admitted that "aid is too scattered, (and) there is a lack of coordination," It's also way short of amounts needed to rebuild and address human need.

"Housing for the hundreds of thousands made homeless by the quake remains a crucial issue." So do poverty, unemployment, vital unmet needs, and appalling living conditions.

Things remain so bad that economist Michael Clemens believes escape is the only way to escape poverty.

On October 14, his Center for Global Development article written with Tejaswi Velayudhan headlined, "Migration as a Tool for Disaster Recovery: US Policy Options," saying:

America has no ameliorating policy. As a result, "(t)here is scant sign of economic recovery, and a cholera (epidemic) has infected hundreds of thousands."

Washington simply doesn't care. Migration remains Haitians' best option. "Four out of every five Haitians who have escaped destitution did so by leaving...."

Hundreds of thousands still suffer. A ready solution's at hand: "migration." Undocumented Haitians in America got "temporary protected status." Their ability to work and remit funds home "may be the greatest contribution America has made towards Haiti's reconstruction to date."

Moreover, DHS can grant permanent residence visas to "Haitians already approved for a green card....on the basis that a family member is a US citizen." Given today's deplorable conditions, it's the least America can do to help.

On January 9, Center for Constitutional Rights lawyer Bill Quigley headlined, "Haiti: Seven Places Where the Earthquake Money Did and Did Not Go," saying:

Today's Haiti "looks like the earthquake happened two months ago, not two years." Virtually no funding "actually went directly to Haiti." It was diverted to private contractors, other nations, international agencies and predatory NGOs.

The Interim Haiti Recovery Commission (IHRC) and Haiti Reconstruction Fund (HRF) faired little better. As of July 2011, only $84 million of IHRC's approved projects worth $3.2 billion was spent. In addition, only five were completed. HRF performed so poorly that its mandate wasn't renewed last October.

In contrast, a "Haiti First policy could strengthen public systems, promote accountability, create jobs, and build" local skills. Eventually, Haitians will have to help themselves. They're deserve direct aid to begin trying.

On January 10, Center for Economic and Policy Research (CEPR) Co-Director Mark Weisbrot called conditions in Haiti dire. As a result, the lives of most Haitians haven't improved "and in many cases have deteriorated."

At issue, is international unaccountability. "It is hard to see how the situation today is any better than a year ago. In many areas, such as provision of sanitation facilities and housing to internally displaced persons (IDPs), there has been very little improvement."

Moreover, cholera infected "hundreds of thousands more Haitians during the past year, and killed thousands, with no end yet in sight."

Instead, Blue Helmet occupation militarized Haiti. People hate them and want them out. Imagine if MINUSTAH's budget went for people needs. It's an idea whose time has come. In fact, it long ago arrived.

Will America go full Nazi? Next line to be crossed will be to deny medical treatment to the unvaxxed

US Military Keynesianism on Steroids