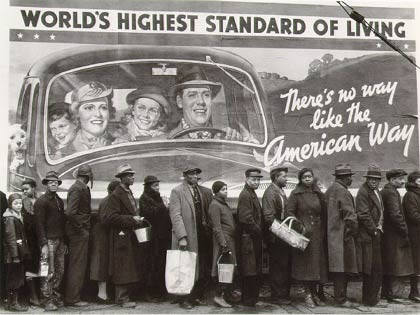 His "Dismal Economic Outlook For The New Year" article highlights what media scoundrels and mainstream analysts miss or suppress.

Decades of imperial wars, exporting America's manufacturing base and other high-paying jobs, as well as financial deregulation and corporate/government collusion "severely damaged the US economy and the economic prospects of 90%" of households. They've never had it so bad with worse coming.

It's clear from wealth distribution, unemployment, growing poverty, and millions in need losing their struggle to get by. Homelessness, hunger, lost homes, closed strip malls, empty office buildings and other facilities, "shopping mall vacancies," and "huge population losses in America's" once prosperous manufacturing cities show a nation in decline.

At the same time, Washington and Wall Street's controlled Fed "ruled out permitting the banks to fail. That leaves inflation," high unemployment, and troubled times coming.

Expect it though guessing when's hard to know. However, reality eventually trumps hope based on false expectations. The "comfortable world" Americans once knew "is falling apart at the seams."

The American Economic Association's January meeting addressed many topics, including the "economics of regime change" and "political economy of the US debt and deficits."

As long as debt issuance is bought or monetized, crisis short-term is avoided. Longer term's another matter, but consider Japan. With debt about 220% of GDP, it's nearly double America's size relative to its economy and nowhere near collapse.

At the same, America and Europe stress austerity when stimulus is badly needed for growth and job creation. However, US electoral politics excludes proposing it. As a result, "high unemployment and a lot of unnecessary misery in the world's richest country for the foreseeable future" is assured. So is America's "lost decade."

Overall, conditions are decidedly negative at a time financial markets are whistling past the graveyard. Expect reality to eventually outstrip hope.

In fact, Financial Times contributer Stefan Wagstyl says economies are so interlinked that a shock in one spreads everywhere in short order, including among the strongest. It's coming but no one knows when. Today's fragility is a global event.

Expect troubled Eurozone economies to lead others down. Since peaking in 2010, its leading indicator plunged. So did Asia and an overall global one.

The Fed's latest Beige Book assessment reflected weak hiring, housing mired in Depression, and faltering retail pricing power. In addition, the UCLA-Ceridian index of US industrial activity shows distinct weakness. At -4%, its year-over-year trend is negative for the first time since November 2009.

"Given the current economic and geopolitical conditions, the central banks and world governments already have plans in place to declare" it "with the possibility of military martial law to follow."

"The financial house of cards is collapsing. In 2012, many of the long-simmering socioeconomic and geopolitical trends," he follows will climax. "Some will arrive with a big bank and others less dramatically, but no less consequentially."

Can a "rudderless ship" be saved, he asks, by bankers and other technocrats ripping off societies and people for self-enrichment? Global protesters want none of it and keep struggling for social change.

Ordinary people must as "(w)e could be headed" for another hyperinflationary "Weimar episode" because of expansive money and credit.

Eurozone, UK and US banks are "broke but still operating, thanks to never ending loans from the Fed." However, any time they spend money or lend reserves, inflation's adversely affected.

The 1940s Bretton Woods era is over. Now it's "inflate or die." Decades of accumulated government debt approaches saturation. It's coming in a few years at most. At issue is unpayable government debt and zero interest rates benefitting bankers. As a result, expect "greater crisis down the road."

Since the early 1960s, financial excess assured crisis conditions too great to contain. It's been building for over 50 years. "We are at the stage now that risk is growing exponentially, as central banks and governments aggressively intervene in markets, causing major distortions."

From inception, the euro was doomed to fail. "We just don't know when." It's been disintegrating for years. Its demise will damage global economies. "Economic and financial dislocating is at hand." Delaying the inevitable only works so long. Reality eventually triumphs.

Europe and America are sinking. Judgment day awaits. "It could be 2012 or 2017." When disintegration arrives, expect harder than ever hard times.

Ordinary people will be hurt most. Bankers stashed trillions in tax havens. Friendly governments do nothing to retrieve them or help troubled households survive.

No wonder Celente says "welcome to 'Battleground America.' " It's all downhill from here unless global protesters stay committed long-term against conditions too unacceptable to tolerate.

That's the wild card world elites fear with good reason. It's because ordinary people can change the world. It's the only way beneficial social change ever comes!

These Are The World's Richest Families