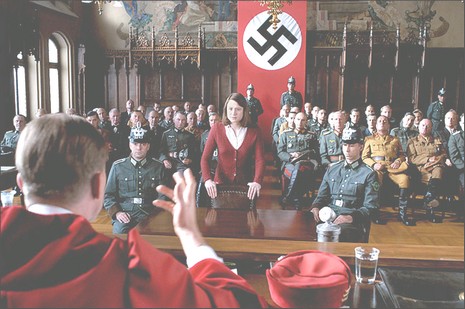 America has a sordid repressive history. Among others, First Amendment rights are violated.

It guarantees freedom of religion, expression, to petition government for redress of grievances, and right to peacefully assemble.

FBI "terrorist profiles" can investigate anyone for any reason. So can local police working cooperatively or alone. Street protests can be criminalized. America's right to dissent is endangered.

On October 28, 2011, DC Superior Court Judge Russell Canan found eight Veterans for Peace (VFP) members guilty of "failure to obey" and "blocking/incommoding." Fined $150, it could have been much worse.

It also wants domestic and international law obeyed, and crimes of war and against humanity ended. During trial proceedings, Richard Duffee petitioned for international law experts to testify. Judge Canan denied them. Defendants will appeal his verdict.

"Unlike many cities that have well-developed regulations governing protest activity, our local regulations contain gaps that need to be filled."

However, an ordinance related memo states:

"The recent issues related to camping on city property have further amplified the need to review whether the city wants to regulate this activity during the DNC."

Tampa will host the 2012 Republican National Convention. Thousands of police will secure convention site areas. Officials expect up to 15,000 protesters in town.

Whether or not Tampa plans anti-protest legislation, OWS and others present will be targeted, constrained and perhaps evicted. Constitutional rights will be denied. Freedom will take another body blow.

Public parks and beaches would close until 6AM, two hours later than now. In addition, loud noise, amplified sound, and music at parades and public assemblies would be allowed only between 8 - 10PM.

In May 2012, federal and state SWAT team shock forces and snipers will threaten them when G-8 and NATO summits convene. According to an unnamed source, "(T)hey'll be able to shoot the head off a nickel from 500 feet."

Virtually anything goes replaced constitutional protections. For the first time, "domestic terrorism" became a federal crime, applicable to US citizens and aliens. It states criminal law violations are considered domestic terrorist acts if they aim to "influence (government policy) by intimidation or coercion (or) intimidate or coerce a civilian population."

In other words, nonviolent anti-war or global justice demonstrations, environmental or animal rights activism, civil disobedience, and dissent of any kind may be called "domestic terrorism," including OWS protests.

With no hearing or notice, the Patriot Act's Section 806 lets authorities confiscate or freeze foreign and domestic assets of any individual, entity, or organization accused of engaging in, planning, supporting, concealing, or perpetrating acts called domestic or international terrorism against America. Even nonviolent protests are affected.

Other harsh provisions give authorities wide latitude to twist the law perversely and advantageously. As a result, anyone associated with activities called terrorism may be targeted, whether or not true.

In March 2006, Congress renewed most Patriot Act powers. On May 19, 2011, three key provisions were extended another four years. They include:

(2) Authorizing government access to "any tangible item," including financial records and transactions, student and medical records, phone conversations, emails, other Internet use, and whatever else is surveilled.

(3) Permitting alleged suspect organizations and individuals surveilled, whether or not evidence links them to terrorism or complicity to commit it.

Provisions of the 2006 Animal Enterprise Terrorism Act can also target OWS and other protesters. Designed primarily against animal rights activists, it applies to other advocacy, protest activity, and all forms of civil disobedience.

Moreover, repression's so extreme, anything can be called terrorism or activities connected to it threatening national security.

Called the Enemy Expatriation Act, it lets Washington summarily strip Americans of citizenship for "engaging in, or purposefully and materially supporting, hostilities against the United States." No corrorborative proof's needed. In other words, judicially fair convictions according to law don't apply.

America's on a slippery slope toward full-blown tyranny. Freedom hangs by a thread. Anyone challenging state power is vulnerable. Constitutional protections don't apply.

2 Comments in Response to Criminalizing Dissent in America

Meet the Modern Slaves of Freedom at

“Bloody Sunday” … What’s forgotten is what made Martin Luther King, Jr.’s non-violent march for freedom famous rather than notorious was, ironically, the “Bloody Sunday” riot that marred his supposedly peaceful crusade against racial segregation.

If we search the Web, we can find writings like this one showing how the modern slaves of freedom looks like today as shown in the graphic photo. They can do more than just protest their disagreement with the Government … they can do whatever the want, nothing can stop them, including what they do to their face and their body that nothing anymore is natural. This includes drugs, tattoos and nose chain to identify themselves as slaves of their desires.I want you to meet the modern slaves of freedom.