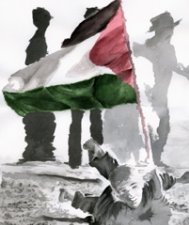 Last July, B'Tselem published a report titled, "No Minor Matter: Violation of the Rights of Palestinian Minors by Israel on Suspicion of Stone-Throwing." It discussed their abusive treatment.

All except one were convicted. Due process and judicial fairness were denied. In violation of international law, Israel treats children like adults. Some aged 10 or younger are arrested, intimidated, tortured, or otherwise abused.

Defense for Children International/Palestine Section (DCI/Palestine) covers their ill-treatment and torture during arrest, transfer, interrogation, detention, and for some, solitary confinement isolation. Case studies explain the traumatizing effects. More on them below.

DCI/Palestine says about 700 Palestinian children are prosecuted annually in Israeli military tribunals affording them no rights. Conviction rates are 99%. Those charged are guilty by accusation.

Children like 12-year old Bashar M. was arrested pre-dawn. His hands were painfully bound behind his back. He was blindfolded, placed on a military vehicle floor, verbally abused, slapped on the face, kept blindfolded at Al Mascobiyya interrogation center, strip-searched on arrival, struck again, denied bail or legal representation, traumatized, and told either confess (to stone throwing) or be imprisoned for a very long time.

Other children report similar or worse treatment including pre-trial isolation, torture, and other forms of abuse.

(1) What affect do abusive interrogations have "on the behavior and mental state" of children and adolescents?

(2) What emotional and social consequences affect them and their families?

(3) What psychological, developmental and social factors increase their vulnerability to give coerced false confessions?

Under ideal conditions, interrogations are stressful for adults. Coercive, abusive ones for children can be traumatizing. As a result, they're vulnerable to confessing when innocent, especially under the following conditions:

• prolonged questioning for many hours;

Moreover, traumatizing isolation may cause mental damage, ranging from "behavioral changes to a loss of touch with reality (a psychotic state)."

Detainees, especially children, feel "helpless and out of control of the situation." Bowing to interrogator demands may result, including false confessions for relief.

Children are less able to endure pain and stress than adults. They're also more vulnerable to psychological interrogation methods. As a result, fear, resignation, or impulsiveness may induce confessions.

They're also more susceptible to leading questions, deception, manipulation, and power of authoritative adult figures. As a result, during stressful interrogations, "they lack the ability, and even the option, to object to requests or coercion by adults."

They're especially vulnerable to abusive Israeli practices, including:

• forceful middle of the night or pre-dawn home entries by large numbers of threatening soldiers; at times, they're masked and camouflaged in black uniforms; occupants are awakened, children dragged out of bed, and homes searched or ransacked;

• deprived of food and water, bathroom privileges and enough sleep, they're forced to wait hours handcuffed and blindfolded;

• parents aren't told where their children were taken; legal help is denied; and

• abusive interrogations and detention follow, including sleep deprivation and isolation.

As a result, children are traumatized, lose control, become vulnerable, feel helpless and unprotected, and succumb to abusive authority.

In addition, they may display "severe behavioral disorders," including "aggression, over-dependence, avoidance, difficulty in returning to a routine, isolationist tendencies, and weeping."

Entire families are affected, unable to provide help and support. However, for children, the experience is devastating and hard to remedy.

The entire ordeal "exhausts and permeates the personality of the child (and) robs him or her of hope." Most vulnerable are children in poor, isolated populations, under conditions of conflict, political tension, and/or severe social stress.

Children, families and societies are affected, especially when victimized and wrongfully abused.

"Every child has the right to be a child, to his or her dignity, and to protections from all forms of violence."

Only 13% of East Jerusalem is zoned for Palestinian construction by permit authority only. The rest is for settlements, green areas, public spaces, or yet to be decided.

Obtaining permit permission presents enormous obstacles, including cost, bureaucratic procedures, and extended periods at times taking years. Most often, the process is futile. As a result, an enormous imbalance exists between available housing stock and demand.

Building without permission has painful consequences, including demolitions, fines and possible imprisonment. Nonetheless, the UN estimates about one-third of Palestinian homes don't comply with zoning requirements.

As a result, at least, 86,500 Palestinians face loss of homes or worse. Dozens lose them annually. Children are especially impacted, "living constantly in an atmosphere of insecurity."

They bear the scars for life. They experience effects similar to abusive interrogations and detentions.

From January 2010 through May 2011, settlers injured 24 Palestinian children and killed one. Data exclude others affected by harassment and intimidation. Tensions are especially high in areas where settlers resided in Palestinian neighborhoods like Silwan and Sheikh Jarrah.

Severe Palestinian overcrowding and movement restrictions exacerbate them, as well as the presence of security forces and private guards. Attacking children results, including random or opportunistic incidents. Often they're in full view of police who do nothing to intervene.

Since late 2009, increasing numbers of Palestinian children were arrested on charges of stone throwing, especially in Silwan.

According to Israeli police figures, from November 2009 through October 2010, 1,267 criminal files were opened. Arrests, interrogations and detentions followed.

Concern got 60 prominent Israeli professionals to write Netanyahu and other senior officials. A November 24, 2010 letter said:

"(C)hildren and teenagers related that had been dragged out of their beds in the middle of the night or arrested in their neighborhoods by undercover detectives and special security forces."

They were "taken in for questioning while handcuffed and unescorted by their parents. In certain cases, the families were not notified of the arrest in real time. Minors were asked to give names and incriminate friends and relatives as a condition of their release."

They "were threatened and humiliated by their interrogators, and some of them were subject to physical violence while taken in for questioning and under interrogation."

These concerns correspond to complaints received by DCI-Palestine, and were included in testimonial evidence in their report.

Common complaints replicate those covered above. "Contrary to international law, Israel imposes its own civilian legal system on the Palestinian residents of East Jerusalem." DCI/P cites frequent security force violence and other forms of abuse.

Children as young as 7 (now 6) were affected. Terrified and traumatized, many are permanently scared. Security forces commit crimes against humanity with impunity.

According to one mother in danger of losing her home:

"I believe (they just) want to get rid of" us. Indeed so, and children always suffer most.