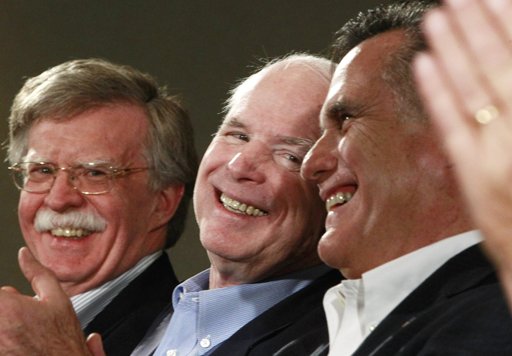 In November, voters have unpalatable options between a lawless/crime boss/militarist/pro-war/anti-populist/morally corrupt president, and a rogue's gallery of alternatives looking more like a police lineup than legitimate candidates.

Ron Paul's an exception for wanting the Fed abolished and America's wealth no longer squandered on imperial wars. At the same time, he stops short of endorsing peace, favors strong national defense policies, is uncompromisingly pro-business, and wants social spending ended, leaving America's least advantaged on their own.

In contrast, OWS and other progressives want long denied social justice. Voting Republican or Democrat assures continuation of America's dark side, including under Romney. He's a candidate no one should trust.

In mid-December, ABC News said he called himself "the ideal" Tea Party candidate because his views replicate theirs. Its platform calls for:

• tax cuts for the rich;

• eliminating the national debt, though doing so precipitously would wreck the economy;

• promoting civic responsibility to preserve life, liberty and pursuit of happiness; by "happiness" in America's Declaration of Independence, Jefferson meant property; so do Tea Party leaders;

• freeing people to operate as they wish within the law, no matter the consequences for others;

Overall, it stresses fiscal responsibility, constitutionally limited government, free (not fair) markets, and everyone on their own sink or swim.

In 2002, he headed the winter olympics Salt Lake Organizing Committee. In 2008, his presidential bid lost to John McCain.

His education includes a 1971 Brigham Young BA and combined 1975 Juris Doctor/MBA from Harvard Law and Business Schools. He won law school honors and was named a Baker Scholar for finishing in the top 5% of his business school class.

In 1984, Romney and B & C principals co-founded Bain Capital (BC). A vulture capital firm, it profiteers by leveraged buyouts and asset-stripping companies. The process bankrupts them, leaving their employees high and dry on their own.

It calls itself "one of the world's leading private investment firms, managing about $60 billion." It claims a "competitive advantage....to deliver industry-leading returns for our investors."

It does it the old fashioned way by profiteering at the expense of vulnerable targets. While active, Romney made millions. According to required Federal Election Commission financial reports, his net worth ranges from $190 - $250 million. It's mostly in blind trusts. An additional one naming his children and grandchildren was valued from $70 to $100 million in 2007.

During his 14 years heading Bain, its annual return on investment averaged 113%.

"Sometimes the medicine is a little bitter but it is necessary to save the life of the patient. My job was to try and make the enterprise successful, and in my view the best security a family can have is that the business they work for is strong."

American Pad & Paper (Ampad) shows how Bain works. In 1992, BC acquired it for $5 million. It was part of a "roll-up" strategy to buy similar firms to expand revenues and cut costs.

The purchase netted BC $100 million despite the firm eventually going bankrupt. Workers lost jobs. Shareholder equity became worthless. Creditors got less than 50 cents on the dollar.

In 1993, Ampad paid Bain advisory fees under a management agreement.

In 1994, Bain acquired a Marion, IN plant. Workers struck over layoffs, wage and benefit cuts.

In 1995, Bain shut the plant and fired 200 workers. It got at least $2 million in annual management fees and additional ones for every Ampad acquisition.

Ampad got funding to acquire an envelope and stationary maker, and paid Bain about $60 million.

In 1996, Ampad completed an IPO, selling about three million shares. The company and investors got from $45 - $50 million, another $2 million for arranging the deal, and other fees.

In 2000, the company filed for Chapter 11 bankruptcy to reorganize.

In 2001, it shifted to Chapter 7 to liquidate assets and pay creditors. Senior secured ones took a 50% haircut. From acquisition to bankruptcy, Bain made over $100 million on a $5 million investment. Workers and shareholders lost everything. Creditors lost half their money or more.

From 1990 - 1992, Romney returned to Bain & Company as CEO. At the time, it faced financial collapse. A combination of restructuring, real estate deals, and loans restored profitability.

In 1992, he returned to BC, then left in February 1999 to head the 2002 Salt Lake City Olympic Games Organizing Committee. By then, Bain was one of the nation's top private equity firms with up to 18 partners, 115 employees, and $4 billion under management. Today, it's $60 billion.

According to University of Chicago Booth School of Business Professor Steven Kaplan, Romney, "came up with a model that was very successful and very innovative, and that now everybody uses."

When he left, terms included profiting from some Bain investments, including leveraged buyouts and other deals. As a result, he earns millions annually.

Romney on the Issues

He's for less taxes, government spending, regulation, and federal programs. He wants more trade, energy production, local power, human capital and labor flexibility (code language for destroying worker rights). He calls it "a plan to get America back to work."

He wants Obamacare repealed and replaced with "market-based reforms," empowering states and individuals to reduce costs. How he doesn't say.

He says America "faces a bewildering array of threats and opportunities." He calls "national security" the nation's "unifying thread."

"When America is strong, the world is safer." Only US power can "ensure the security and prosperity," he claims. Again, no explanation's given, nor does he identify threats at a time the nation has none.

During the 2008 campaign, a Romney ad concluded saying, "We can and will stop Iran from acquiring nuclear weapons." He called for military action "in the nature of blockade or a bombardment or surgical strikes or one kind or another."

More recently, he called Iranian leaders intolerant, repressive, state sponsors of terrorism. He also accused them of developing nuclear weapons, despite the latest March 2011 US intelligence assessment concluding the opposite.

He called for diplomatic isolation and crippling sanctions, including denying Iran access to foreign capital and investment. He also supports divesting from companies supporting the Islamic Republic, and says "the military option is very real and very credible."

He accused Obama of failing to deal "with the greatest threat we face, which comes from Iran."

When asked about Syria, he responded:

"Of course, it's time for the Assad dictatorship to end. And we should use covert activity" and sanctions because Syria's "an ally of Iran." He opposes a no-fly zone because the nation has more tanks than planes, and it's not bombing its people.

Neither was Gaddafi. Romney said the world's a better place without him. Earlier, he called on Libyans to take up arms and revolt. However, last July he tried having it both ways. He supported America's involvement but opposed Obama's regime change policy.

While campaigning he said:

"I know I've said that the US shouldn't support Gaddafi's removal, but that was back when he was still in charge. The fact that he's no longer in charge, well that changes everything. I'm calling for his ouster and look, he's already gone. That's the kind of bold leadership you can expect from a Mitt Romney administration."

"On my first day in office, I will send five bills to Congress and issue five executive orders that will get government out of the way and restore America to the path of robust economic growth that we need to create jobs."

(3) The Domestic Energy Act: directing the Interior Department to survey US energy reserves together with exploration companies to initiate more drilling for resources we should phase out for safer, cleaner, renewable ones.

(4) The Retraining Reform Act: turning responsibility over to states.

(5) The Down Payment on Fiscal Sanity Act: immediately cutting all non-security domestic spending by 5%, reducing the federal budget by $20 billion.

His Executive Orders include:

(1) An Order to Pave the Way to End Obamacare: Return "maximum possible authority to the states" and keep healthcare privatized.

(2) An Order to Cut Red Tape: End government regulations "that unduly burden the economy or job creation." In other words, free corporate predators to operate regulation-free.

(5) An Order to Empower American Businesses and Workers: Romney's an anti-labor job killer, not a creator.

Romney on the Issues

(1) Taxes: Cut corporate taxes from 35 - 25%, preserve others for the rich, and ideally have a flat or "flatter" tax system.

(3) Crime and punishment: He supports tough on crime policies, including three strikes and you're out, mandatory sentences, and the death penalty.

(4) Education: He supports privatizing public education; standardized tests that promote rote, not real learning; and empowering families to save to cover high tuition costs in place of government aid.

(5) Labor: He supports more worker rights by denying them any through unions representing their interests.

(8) Gun control: He calls gun ownership "one of the most basic and fundamental rights of every American."

(9) Israel: His rhetoric shows uncompromising pro-Israel support, including by saying:

"Israel should not under any circumstances ever go back to the 1967 borders."

"Israel's enemies would use that land to again attack Israel with the full intention of destroying Israel."

"Palestinians already have a country. It's called Jordan."

(10) Terrorism: He calls fighting it one of his top priorities, and once said "We ought to double" Guantanamo capacity.

(11) Torture: He opposes it but supports "enhanced interrogation" that amounts to the same thing.

(12) Declaring war: In a 2008 presidential debate, he ignored constitutional and international law, saying he didn't know if only Congress can declare war.

(13) Drugs: He strongly opposes illegal ones, including medical marijuana.

(15) Unemployment insurance: Despite expressing support for safety net protection, in 2010 he said:

"The indisputable fact is that unemployment benefits, despite a web of regulations, actually serve to discourage some individuals from taking jobs, especially when the benefits extend across years."

He favors individual unemployment savings accounts and financial incentives for business to hire and train workers unemployed for extended periods.

Romney's uncompromisingly hard-right. He believes whatever government does, business does better so let it.

If elected, corporate interests will be prioritized at the expense of long denied social justice.

As a result, people needs will go unmet at a time help more than ever is needed.

Romney's America will leave everyone on their own sink or swim. Know what you'll get by supporting him.