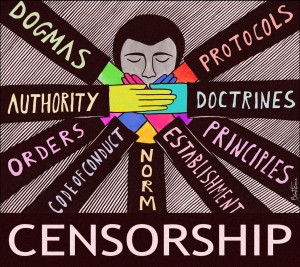 On May 12, Senator Patrick Leahy (D. VT) introduced "S. 968: Preventing Real Online Threats to Economic Creativity and Theft of Intellectual Property Act of 2011 (PROTECT IP)." Referred to the Judiciary Committee, May 26 hearings were held. Debate's scheduled for next week.

On October 26, Rep. Lamar Smith (R. TX) introduced "HR 3261: Stop Online Piracy Act (SOPA): To promote prosperity, creativity, entrepreneurship, and innovation by combating the theft of US property, and for other purposes" Referred to the House Judiciary Committee, markup continues.

Leahy, Smith, and congressional supporters claim the measures protect corporate investments against online piracy. In fact, they're about censorship and subverting Internet freedom.

In other words, they'll blacklist and shut them down arbitrarily to silence them. Media giants will have unprecedented powers. So will Congress and the administration. Internet freedom will be jeopardized. So will a free and open society.

Provisions empower the Attorney General to cut off access and funding for alleged "parasite" foreign and domestic sites. An Internet czar will decide if US interests are harmed. Courts will enforce police state rulings.

Both bills are so deeply flawed, they can't be fixed. Killing them is the only option.

"January 18, 2012 is the largest online protest in history, to stop the Internet censorship bills, SOPA & PIPA. Join in by blacking out your site and urging everyone you can reach to contact Congress now."

With many others, Wikipedia's "blacking out the English (site) for 24 hours, beginning at midnight January 18, Eastern Time." During the blackout, information on SOPA and PROTECT IP will stay available.

SOPA and PROTECT IP will "censor the Internet and slow economic growth in the US."

It also urges readers to sign a petition, expressing opposition to Congress.

The Battle to Save Internet Freedom

Internet freedom's on the line. So aren't First Amendment rights without which all others are at risk. EFF explained worrisome provisions, including:

(2) ISPs, search engines, and other information tools will be forced to comply.

(3) Web sites will have to "block anything from a user post about browser add-ons like DeSopa, to a simple list of IP addresses of already-blocked sites."

(5) Investments in online startups will be affected.

(6) Open source software will be decimated.

(7) A "vigilante" provision grants immunity to ISPs for over-blocking "innocent users or block sites voluntarily with no judicial oversight at all." As a result, abuse potential is incalculable. Moreover, intermediaries only need show "good faith" and act on what they deem "credible evidence."

(8) Copyright holders will be able to get unopposed court orders to cut off foreign sites from payment processors and advertisers.

(10) The Attorney General will be authorized to block domain name services and be able to de-list sites from search engines. According to Google chairman Eric Schmidt, it "criminalize(s) linking and the fundamental structure of the Internet itself."

The same provision applies to payment processors and advertisers.

As a result, SOPA and PROTECT IP will "drastically change the way we use the Internet (for the worse), and punish millions of innocent users" who never thought about copyright infringement. According to Reddit co-founder Alexis Ohanian:

These bills are "the equivalent of being angry and trying to take action against Ford just because a Mustang was used in a bank robbery."

"These bills must be stopped," says EFF, "if we want to protect free speech and innovation on the web."

Do it easily on EFF's blacklist.eff.org.

EFF's one-page guide about the blacklist bills also provides relevant information to review and share with others.

Heavyweights Face Off on Both Sides

Some initially offered support, then softened positions. In a joint statement, they said:

"Valid and important questions have been raised about the(se) bill(s). As (they) now (stand, they) could sweep in more than just truly egregious actors." Redefinitions of who can be prosecuted are needed. "Unintended consequences must be avoided."

"Due process, free speech, and privacy are rights (too important to) be compromised." The Business Software Alliance (BSA) "has long stood against filtering or monitoring the Internet. All of these concerns should be duly considered and addressed."

In over 90,000 local groups, Meetup has more than 10 million people involved. Its web site headlines, "Meetups mobilize against PIPA and SOPA," saying:

NYTM's "calling on every concerned resident to take to the streets. In solidarity, the Hackers and Founders Meetup of the Bay area scheduled their own Meetup to rally" support.

On January 17, Save the Internet.com headlined "Momentum Builds Against SOPA and PIPA," saying:

"Millions of Internet users have succeeded in slowing down the Hollywood-funded momentum of the bills." After initially staying largely silent, the major media "finally w(oke) up."

A White House statement tried having it both ways, saying:

"We will not support legislation that reduces freedom of expression, increases cybersecurity risk or undermines the dynamic, innovative global Internet."

At the same time, it said "online piracy is a real problem that harms the American economy, threatens jobs for significant numbers of middle class workers and hurts some of our nation's most creative and innovative companies and entrepreneurs."

It also "call(ed) on all sides to work together to pass sound legislation this year that provides prosecutors and rights holders new legal tools to combat online piracy originating beyond US borders."

It was typical Obama, feigning opposition while supporting the bills' core provisions.

At issue is a free and open Internet, the last frontier of free expression. At this stage, it's very much up for grabs.

Google Will Block Some Search Suggestions to Fight 'Election Misinformation'

5G Opponents Are Not Luddites