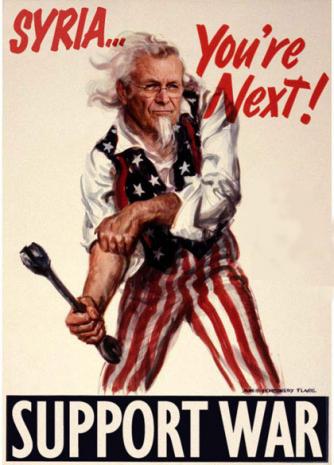 "My country will withdraw its monitors because the Syrian government did not execute any of the elements of the Arab resolution plan."

"We are calling on the international community to bear its responsibility, and that includes our brothers in Islamic states and our friends in Russia, China, Europe and the United States."

He also called for "all possible pressure" against Assad.

Saudi Arabia kowtows to Washington. It's also repressive and lawless with no legitimacy whatever. In its latest 2011 human rights assessment, America's State Department accused it of arbitrary arrests and detention, torture and other abuses, political prisoners, absence of basic freedoms, and other international law violations.

It was said because it's not reported. It also doesn't deter America from supporting Saudi policies and pursuing far worse ones globally.

Assad's wrongfully blamed for a Western/Israeli/rogue regional alliance-generated insurgency. So far, he's holding on. At issue is regime change, isolating Iran from its key ally.

Expect greater pressure on Tehran ahead. War's an option, including against Syria, if sanctions and other destabilization methods fail.

"Faced with the failure of its observer mission to curb violence," League members "on Sunday unexpectedly floated an ambitious peace proposal that would require (Assad) to hand over power to a deputy and start negotiations with his opponents within two weeks."

They also proposed a national unity government within two months, followed by presidential and parliamentary elections within six months.

"The formation of a national unity government within two months, with the participation of both the regime and the opposition, headed by an individual, previously agreed upon, and whose mission would be the implementation of the terms of the Arab League's plan."

"We ask that the Syrian regime leave and hand over power. We are with the Syrian people, with their will and with their aspirations."

"We're going to the Security Council. We know what the Syrian people are going through. We are doing as much as we can."

"Syria rejects the decisions taken by the Arab League (AL) Council on the ministerial level on Syria which are outside an Arab work plan and the Protocol signed with the AL."

These decisions "violat(e Syrian) sovereignty, (and) blatant(ly interfere) in its internal affairs (as well as) violat(e the) objectives for which the AL was established and the Article VIII of its Charter."

"Syria condemns this decision, which came in the framework of the conspiratorial scheme hatched against Syria which have been exposed (as attacks on) people and the Arab Homeland."

Instead of "halting (the) financing and arming (of) armed terrorist groups which (killed) innocent Syrian civilians and attack the state's facilities and infrastructures, (and) stop the misleading media campaigns responsible for the bloodshed, we listened to instigatory statements which reflect their owners' connection with the schemes targeting the security of our people through demanding the foreign interference in Syria's affairs."

Qatar and most other League members are lawless rogue states. Pro-Western despots head the worst of them. Duplicity, lawlessness, repression, and complicity with Western imperialism define their agenda.

They actively supported Libya's ravaging, colonization, exploitation, and plunder. They're silent about ongoing atrocities in Bahrain, Yemen, Somalia, Palestine, and elsewhere in the region.

Repeatedly, most League members attack, kill, arrest, imprison, and/or brutalize their own people for protesting against political, economic and social injustice.

League leaders have no legitimacy, nor does international law support their proposal.

The 1933 Montevideo Convention of Rights and Duties codified them in international law. Article 3 states:

"The political existence of the state is independent of recognition by the other states. Even before recognition, the state has the right to defend its integrity and independence, to provide for its conservation and prosperity, and consequently to organize itself as it sees fit, to legislate upon its interests, administer its services, and to define the jurisdiction and competence of its courts."

Article 4 calls states "juridically equal," with rights the same as all others.

Article 5 says fundamental state rights "are not susceptible of being affected in any manner whatsoever."

Article 8 says "No state has the right to intervene in the internal or external affairs of another."

The UN Charter recognizes the following state rights and obligations:

• equality among all states;

• non-interference in their domestic affairs;

• non-interference in other states' domestic affairs;

• refraining from threats or force.

In other words, states' rights entail obligations to others. Montevideo and UN Charter provisions defined them.

In October 1970, the General Assembly approved the Declaration on Principles of International Law concerning Friendly Relations and Co-operation among States in accordance with the Charter of the United Nations.

The above sovereign rights are included in them. All UN members are bound by them. Washington, rogue NATO partners, Israel, and complicit Arab League states spurn them.

Violence, instability and war result. Syria and Iran are threatened. As a result, Fidel Castro sees world peace "hanging by a thread," saying:

"I believe that the political situation surrounding Iran (and Syria) and the associated risks of a nuclear war that involves us all (are) extremely delicate because they threaten the very existence of our species."

"The sheer tranquility with which the United States and civilized Europe carry out (their) campaign(s) with the incredible and systematic acts of terrorism is enough to shock anybody....Is it an exaggeration to say that world peace is hanging by a thread?"

Yet major media scoundrels threaten it. Their rhetoric supports imperial lawlessness. In 2011, they cheerled NATO's Libya war. They now target Syria and Iran.

They endorse Washington's agenda, ignore rule of law principles, turn a blind eye to facts on the ground, and maintain a steady hostile drumbeat, mindless of potential consequences.

Bill Keller formerly served as New York times executive editor. In other words, he called the shots on editorial policy. In June 2011, he stepped down to focus on writing. Too bad he didn't opt for something else.

Truth and full disclosure aren't its long suit. Managed news and opinion define it. Keller proliferates it with comments like "for all its denials, the Iranian regime is determined to acquire nuclear weapons, or at least the capacity to make them quickly in the event of an outside threat."

No matter that America's latest intelligence assessment dismisses the allegation. Keller didn't explain nor do other Times writers or commentators.

Instead he endorses hard-line lawlessness short of war, including sanctions, refusal to exclude military action, and regime change for a US client one.

"The point of tough sanctions, of course, is to force Iranians to the bargaining table, where we can do a deal that removes the specter of a nuclear-armed Iran," even though there is none.

Keller knows but didn't say. Instead, he betrayed Times readers with misinformation. So do other major media scoundrels.

Why else would Castro and like-minded analysts see world peace hanging by a thread. Possible nuclear war threatens it. Yet America's media risk it.

So do rogue politicians vying to be president, Republican and Democrat. As a result, humanity also hangs by a thread. It's no threat to take lightly.