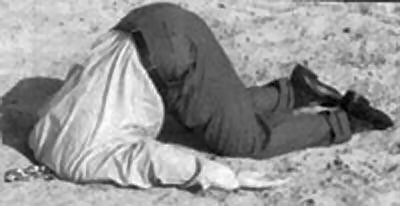 Whistling Past the Graveyard

Be careful. Economist David Rosenberg warns about renting, not owning, rallies based on hope. They're sure to disappoint, especially ones fueled by speculative excess.

In his book titled, "Manias, Panics and Crashes: A History of Financial Crises," Charles Kindleberg wrote:

"The moral hazard problem is that policy measures undertaken to provide stability to the system may encourage speculation by those who seek exceptionally high returns and who have become somewhat convinced that there is a strong likelihood that government measures will be adopted to prevent the economy from imploding - and so their losses on the downside will be limited."

"The moral hazard problem is a strong argument for nonintervention as a financial crisis develops, to reduce the likelihood and severity of crises in the future. Will the policymakers be able to devise approaches that penalize individual speculators while minimizing the adverse impacts of their imprudent behavior on the other 99% of the country?"

In fact, today's excess is unprecedented because policymakers allow, encourage, and support it with massive money creation and freedom from regulatory restraints.

"Debt is a two-edged sword. Used wisely and in moderation, it clearly improves welfare. But, when it is used imprudently and in excess, the result can be disaster. For individuals and firms, over-borrrowing leads to bankruptcy and financial ruin."

"For a country, too much debt impairs the government's ability to deliver essential services to its citizens."

Beyond a certain level, debt hurts growth. "For government debt, the threshold is around 85% of GDP." Countries exceeding it must effectively put their fiscal house in order. Longer-term, they should avoid approaching dangerous threshold levels. The same goes for business and households.

In recent decades, few followed this advise. As a result, for the above three sectors combined, the ratio of debt to GDP in developed countries rose from 167% in 1980 to 314% today. In other words, it exceeded GDP an average of over 5% per year for 30 years. Moreover, current policies exceed the worst past ones. As a result, future trouble is assured. It's not a matter of if, but when and how severe.

Financial analyst Martin Weiss observes that never in modern memory "have we seen a fiercer fight between two opposing forces - global recession and mad money printing....On one side, we have the" world's largest economy, the EU, "collapsing before our eyes."

On the other, the Fed and ECB went "beserk" printing money and keep doing it. Massive liquidity fuels market rallies that end badly. As a result, an economic collapse worse than 2008-09 looms. It'll be sooner or later, but expect it, perhaps with little warning.

We know where the tipping point lies. "Debt becomes poisonous once it reaches 80pc to 100pc of GDP for governments, 90pc for companies, and 85pc for households."

Economic collapse follows. As a result, "(w)e must prepare for a long hard slog, for the rest of" our lives. Good policies could have prevented it. Instead, deplorable ones follow bad ones and continue on a road to disaster.

Liquidity highs only last so long. Their true cost won't be known until money printing madness stops. Newton taught that every action has an equal, opposite reaction. In economic terms, policymaker excess to counter financial forces inevitably creates a series of unintended consequences.

The Baltic Dry Index tracks raw material shipping costs. In the past month alone, it's down 50%. Oil demand's falling. Political risks abound, not least of which threatens much higher oil prices as Middle East tension rises. At the same time, complacency's at whistling past the graveyard levels.

As in "1933, 1934 and 1935, the economy and the stock market can experience a brief cyclical recovery, especially given all the massive monetary intervention by the central banks, but the fragility and vulnerability never go away, and neither does the hardship for many."

Since the official end of recession, America's labor force contracted by over 800,000, an unprecedented number that keeps growing. Moreover, real per capita personal income's remained flat for six years despite massive money printing and fiscal stimulus. "If that's not a 'depression,' " what is it?

"We had a mini-recovery," he said, "but it cost $1.8 trillion. We had a second recovery, and that cost $1.5 trillion. We are entering a third of what is becoming yearly recoveries that will probably cost $1.3 trillion. In other words, without these massive injections of money and credit we would probably be in a deflationary depression."

Eventually he expects one. Kicking the can down the road only works so long, and the further along it gets, the worse the outcome.

Policymakers "just don't get it." Excess and hope define their agenda. So does turning a blind eye to fraud and grand theft.

Watch France's spring presidential elections. Frontrunner Francois Hollande and Front National's Marine Le Pen favor dumping the euro and EU. Of course, following through if elected is another matter, but their views reflect growing dissolution with a doomed system. They want out before it happens.

Greece's crisis is worse now than two years ago. Portugal's replicating it. Ireland, Italy, Spain, Belgium and other European economies are disasters waiting to happen. The entire continent's weak. No wonder two-thirds of Germans want Deutschemarks back. They're printed just in case. So are French Francs.

Policymakers meet and solve nothing. The Fed's pumping trillions into Europe. Its "Ponzi scheme widens and deepens." Sovereign debt's being downgraded. Rolling it over's accomplished with $1 trillion in Fed loaned swaps to the ECB. It lends to banks. They use borrowed funds to purchase sovereign debt.

Perpetual credit creation's unsustainable. Central banks know it. Nonetheless, with no alternative, they continue bad policy, assuring big trouble when it comes. Chapman thinks the current excess will last another year or so. Bankers know fixing the system requires purging it.

Strategy involves delaying day of reckoning time as long as possible. When it arrives, their power will wane. A Eurozone January policy meeting was postponed until end of February for lack of real solutions. European leaders "are hanging on for dear life."

Problems are minimized or covered up. All solutions chosen are stopgaps that won't work. All they do is buy time for eventual greater trouble. Chapman says world leaders "have been on a fool's errand for many years. Looting the world and controlling it wasn't enough."

"As a result, they're bringing their whole system down with the hope of ultimate total control." In the end, no matter what they try will fail.

His chicanery never ends. This one involves federal regulators using pension theft to settle mortgages. "It's yet another (pre-election) gambit," assuring a bad problem gets worse.

Obama's agenda sustains criminal elitism. "What he misses is that" coverups no longer work and may even blow up before November.

Adding insult to injury, he's packaging his latest grand theft scheme "as a boon to ordinary citizens." Mortgage settlements have been farcical. Administration officials finally realize that today's housing mess will get worse, not better. Obama needs a propaganda victory to counter it.

As a result, banks and government negotiators agreed on settlement terms sent to all 50 states for approval. They involve reducing mortgage balances and monthly payments by more than $25 billion.

The "bulk of the supposed settlement would come not in actual monies paid by the banks....but in credits given for mortgage modifications for principal modifications."

The entire deal smells theft. Servicers "will be able to count modifying first mortgages that were securitized toward the total." As a result, investor-owned mortgages will be restructured. Banks won't have to write down second mortgages. "So this deal amounts to a transfer from pension funds and other fixed income investments to the banks, at the Administration's instigation."

Moreover, only a small number of "grossly overhoused borrowers" will be helped, provided the program's implemented. History shows bankers benefit by welching on deals struck. They also commit grand theft and lie, including to Congress.

As a result, "odds favor that servicers will pretty much do nothing except perhaps be given credit for mortgage modifications they would have made anyhow." Ordinary people will lose out on top of everything else harming them. Obama's responsible. Now he promises more mischief packaged as help.

People power works. It got Congress to scrub SOPA and PIPA Internet legislation at least for the time being. It's time to beat bankers at their own game.

The stakes are huge. Success is a potential game-changer, making everything else possible.