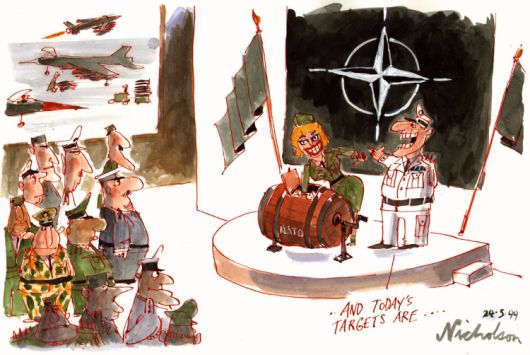 Information obtained from witnesses, victims, and other parties were kept confidential unless already revealed and available.

Investigations weren't meant to be comprehensive. Rather, the mission tried "to convey the considered observations of its members, in order to facilitate, and prompt, the work of other bodies and authorities."

From November 15 - 22, investigations and interviews were conducted in Western Libya alone, in and around Tripoli, Zawiya, Sibrata, Khoms, Zliten, Misrata, Tawergha, and Sirte. Significantly, Benghazi was omitted, an area plagued by insurgent crimes.

Evidence suggests NATO classified civilian sites as military ones for attacks, including homes, schools, colleges, food distribution centers, hospitals, mosques, and others. In addition, civilians were targeted, notably in Sirte.

In fact, one incident there killed 47 or more non-combatants. This and other incidents raise "significant questions," requiring further inquiry and disclosure.

The ICC notoriously serves Western interests. As a result, it absolves or ignores their crimes while targeting their enemies like Gaddafi.

Investigators also mischaracterized Jamahiriya governance, calling it "an elaborate facade" to hide Gaddafi's sole authority. Quoting the ICG, they described it as "a highly complex formal ruling system containing a plethora of congresses and committees, often with overlapping powers, that have contributed to a sense of orchestrated and perpetual chaos."

In addition by calling himself "Brother Leader," Gaddafi "avoid(ed) accountability."

They quoted the ICC saying "the Libyan State apparatus of power - including political, administrative, military and security branches - consists of a complex set of units and individuals, all of which are ultimately subject to the orders and control of" Gaddafi.

Nonetheless, investigators called it "internationally recognized as the Government of Libya....to oversee the transition to representative democracy."

Moreover, investigators claim "pre-revolutionary Libya (was) characterized by a climate of fear, in which individuals were afraid to speak their mind, where opposition - real or perceived - was ruthlessly crushed, and where security forces committed apparently widespread and systematic abuses with total impunity."

Sadly, the facts belie this description. Most Libyans supported Gaddafi and still do. During NATO's intervention, overwhelming numbers rallied openly. On July 1, 2011, 95% of Tripoli's population (over a million strong) expressed support in Green Square.

Literacy under Gaddafi rose from 20 - 80%. Libya's hospitals and private clinics were some of the region's best. Now they're in shambles.

"The house is a basic need of both the individual and the family, therefore it should not be owned by others." It also covered other social policies, saying:
•
• "Women, like men, are human beings.

• ....(A)ll individuals have a natural right to self-expression by any means....;

• In a socialist society no person may own a private means of transportation for the purpose of renting to others, because this represents controlling the needs of others.

• The democratic system is a cohesive structure whose foundation stones are firmly laid above the other (through People's Conferences and Committees). There is absolutely no conception of democratic society other than this.

Green Book ideology rejects Western-style democracy and predatory capitalism, especially neoliberal exploitation. It's one of many reasons why Gaddafi was ousted.

His impressive social benefits also included free land, equipment, livestock and seeds for agriculture to foster self-sufficient food production. In addition, all basic food items were subsidized and sold through a network of "people's shops."

Moreover, since the 1960s, women could vote and participate politically. They could also own and sell property independently of their husbands. Under the December 1969 Constitutional Proclamation Clause 5, they had equal status with men, including for education and employment, even though men played leading roles in society.

Until Washington and rogue NATO partners blocked its approval, the UN Human Rights Council praised Gaddafi in its January 2011 "Report of the Working Group on the Universal Periodic Review: Libya Arab Jamahiriya."

It said his government protected "not only political rights, but also economic, educational, social and cultural rights." It also lauded his treatment of religious minorities, and "human rights training" of its security forces.

Throughout most of 2011, NATO's killing machine destroyed 42 years of achievements. All Libyans benefitted. Why else did Gaddafi have overwhelming support?

His vision marked him for removal. It was just a matter of when, even though he cooperated with Western powers post-9/11 on matters of intelligence and terrorism.

Until vilified and targeted, he was welcomed in Western capitals. In 2003, he came in from the cold, became a valued Western ally, and had meetings and discussions with top officials like UK Prime Ministers Tony Blair and Gordon Brown, France's Nicolas Sarkozy, Italy's Silvio Berlusconi, US Secretary of State Condoleeza Rice, and others.

He also participated in the 2009 G-8 Summit in L'Aquila, Italy as Chairman of the African Union. At the time, he met and shook hands with Obama.

Moreover, ABC News interviewed him live, and on January 21, 2009, The New York Times published his op-ed headlined, "The One-State Solution" to resolve the Israeli/Palestinian conflict. He called "living under one roof....the only option for a lasting peace."

On May 16, 2006, Washington restored full diplomatic relations. Libya was removed from its state sponsors of terrorism list. At the time, Rice called the move:

"tangible results that flow from the historic decisions taken by Libya's leadership in 2003 to renounce terrorism and to abandon its weapons of mass destruction programs....Libya is an important model as nations around the world press for changes in behavior by the Iranian and North Korean regimes."

She also praised Gaddafi's "excellent cooperation" in fighting terrorism. Moreover, he opened Libya's markets to Western interests by arranging deals with Big Oil giants BP, ExxonMobil, Royal Dutch Shell, Occidental, France's Total, Italy's Eni Gas and others. By all appearances, he joined the club, so why turn on him?

Though on board in some ways, he very much wasn't on others. He supported Palestinian rights. As a result, he opposed Israel's occupation and Gaza's siege.

Earlier he backed South Africa's anti-apartheid struggles, as well as others in Northern Ireland, Spain, and elsewhere.

He opted out of AFRICOM's imperial regional plan. He wanted Libyans to control their own resources and use revenues domestically for all Libyans. His Central Bank of Libya was state owned. It created its own money interest-free for economic growth, not speculation and wealth for predatory bankers.

He promoted pan-African unity, an idea anathema to Washington and Western powers. He advocated a new "Gold Standard," replacing dollars with gold dinars, and hoped other African and Muslim states would adopt the idea. That alone got him targeted for removal.

He had nothing to do with downing Pan Am 103 over Lockerbie, Scotland in 1988. Neither did Abdel Basset Ali al-Megrahi. Scottish judges knew he was innocent but were pressured to convict.

Their report highlighted international crimes, need for more investigation, and prosecutions for those responsible.

It expressed concern for ongoing abuses in detention, mistreatment of foreign workers, and forced displacements of suspected Gaddafi loyalists. It called for measures to stop ongoing crimes.

Nonetheless, it wrongfully said "Libya is emerging from 42 years of authoritarian rule and governance characterized by injustice, the denial of fundamental human rights, and impunity."

However, others condemning Gaddafi appear suspect. Indeed, he had enemies, but most Libyans supported him with good reason. As a result, the report tragically falls short. It includes NATO and insurgent crimes but mischaracterizes Gaddafi's rule.

Mission team members must acknowledge it and point fingers where they belong.

Straightaway, they set up "mobile camps and equipment around oil fields and refineries." In other words, they're protecting Western interests, principally oil. Libyans lost their rightful resources and living standard they afforded.

"Tunis Focus" reports that US forces are in Brega, Ras Lanouf, Sirte, and Tripoli's Mitiga International Airport. Moreover, US and NATO helicopters, warplanes, and drones now patrol Libyan airspace. They're surveilling and attacking suspicious targets.
Ahead lies occupation, neo-colonization, pillaging, exploitation, violence and repression. It persists wherever America shows up. So does overwhelming suffering and human misery. Libyans experienced it for months. Much more lies ahead.