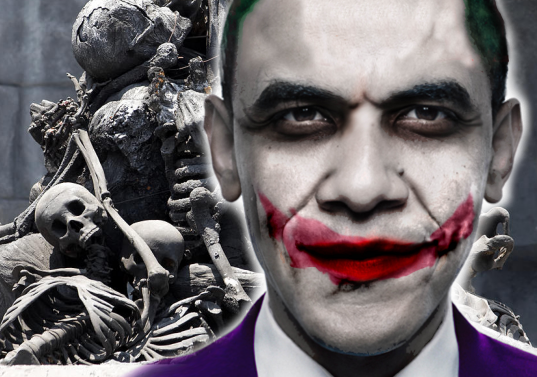 Obama's Failed State of the Union

It was typical Obama, taking credit for what should be condemned. He's a fraud, a crime boss, a war criminal multiple times over, a moral coward, and serial liar.

His State of the Union address was beginning-to-end doublespeak, duplicity, coverup, and denial of failed policies complicit with Wall Street crooks, war profiteers, and other corporate favorites while popular needs go begging.

Obama "pledged on Tuesday night to use government power to balance the scale between America's rich and the rest of the public....toward an economy 'built to last' and what he called irresponsible policies of the past that caused economic collapse."

Throughout his tenure, Obama transferred trillions of dollars to Wall Street, other corporate favorites, and America's rich already with too much. In the process, he deepened a Main Street Depression. As a result, half of US households are impoverished or bordering on it. Hunger and homelessness grow. Nothing's done to help. Unaddressed human need is incalculable.

Over 25 million remain unemployed. Job creation is nil except for low wage/no benefit temp or part-time ones. Inequality in America is unprecedented. Obama supports austerity when massive stimulus is needed. Rich elites never had it so good at the expense of ordinary people left out.

Nonetheless, an accompanying Times editorial headlined, "The State of the Union in 2012," saying:

"A year ago....we applauded" Obama's plan to "put millions of struggling people to work (and his support for) wrestl(ing) down the deficit (by requiring) the wealthy (to pay) a fairer share of taxes."

It includes imperial wars, tax cuts for the rich, corporate handouts, and austerity for ordinary people losing out.

He ignores growing millions unemployed and impoverished. He cut Medicare for seniors and America's disabled as well as Medicaid for poor and disadvantaged recipients. He left growing millions of students debt entrapped, many for life.

He's destroying Middle America. His latest proposal involves looting pension funds to enrich mortgage lenders. Yet he's packaging fraud as a boon to ordinary people. It's typical Obama - say one thing, do another.

Nonetheless, major media scoundrels applaud. As a result, they're part of the problem, not the solution.

The editorial highlighted Obama's "achievements" and plans. It ignored his destructive agenda. It was typical Times, backing rogue politics.

Obama's address wreaked of failed state duplicity, coverup and denial. Throughout his tenure, rhetoric and gimmickry substituted for constructive policies. Tuesday was no different.

He left festering social and economic distress unaddressed, as well as the American dream in shambles. Expect continued business as usual to assure harder than ever times ahead.

He lied saying "The state of our union is getting stronger....In the last 22 months, businesses have created more than three million jobs."

According to Rasmus, Obama's agenda "failed because (it) relied on the private market sector to generate a sustained recovery, instead of on the government directly taking the lead to create jobs, rescue homeowners and resurrect housing, and stabilize state-local government finances long run."

He "bailed out banks that (don't) lend, rescued corporations that (don't) create jobs, and (inadequately) subsidized state and local governments for a brief period and then cut them loose to fend fiscally for themselves."

His agenda was and remains devastating for ordinary Americans. At the same time, corporations and rich ones flourish. His "built to last" economy favors them alone. He lied saying he wants to assure "everyone gets a fair shot." His notion of "American values" rewards the rich at the expense of everyone else.

He took credit for letting auto giants destroy jobs, slash worker pay and benefits, ban strike actions, and let corrupt union bosses serve as corporate enforcers. He said what Detroit did "can happen in other industries."

What Obama did to Detroit, he offers other cities packaged as populism. He took direct aim at destroying decades of painful labor struggles. They included taking to the streets, going on strike, holding boycotts, battling rogue bosses, police and National Guard forces, as well as paying with their blood and lives before real gains were won.

Now they're lost, including a living wage, decent benefits, and the right to bargain collectively on equal terms with management. Obama deplores the idea and fights it.

What grassroots struggles achieved, he and other rogue leaders destroyed. All this in a nation claiming to be government of, by and for the people, most of whom are working class ones struggling to get by. What Reagan era politics began, Obama raised to new levels.

Praising "America's Armed Forces," he also assured permanent war. They "exceed all expectations," he said. "Imagine what we could accomplish if we followed their example." Perhaps he has destroying humanity in mind to assure unchallenged US hegemony.

Obama "once again showed that he does not represent the fundamental change this country needs. Instead of offering solutions to the problems our country faces, (he) deliver(ed) a campaign speech....typical (of) Washington political gamesmanship that (got) us exactly nowhere close to improving the lives of the American people."

His policies assure "continue economic stagnation" and decline. He "claims to want an economy where everyone gets a fair shot, everyone does their fair share, and everyone plays by the same set of rules."

"Yet he remains committed to the same old system of debt, deficits, bailouts and cronyism that created our economic troubles."

"Of course, (he) refuses to even mention the role the Federal Reserve plays in creating an economic system where some are denied a fair shot or even to support my efforts at bringing transparency" to an opaque, secretive process.

"In the area of foreign policy and civil liberties, (Obama's) rhetoric" belies his agenda. It's "hardly 'change we can believe in.' " No wonder more and more Americans, especially young people, (reject his) phony alternatives (and those of) establishment Republicans.."

He wrecked America, governs lawlessly, and threatens worse ahead. Imagine the unpalatable options facing voters in November between a lawless/crime boss/militarist/pro-war/anti-populist/morally corrupt president, and a rogue's gallery of alternatives looking more like a police lineup than legitimate candidates.

They assure continued pro-business/pro-war/anti-populist policies. They threaten Middle America's survival and perhaps humanity if they're not stopped.

Imagine a president taking credit for what should be condemned. Imagine an aroused public refusing to let him.

It's happening with legs but needs to grow. What OWS began, millions need to join and support. That's how great struggles are won. This one's the mother of them all.

3 Comments in Response to Obama's Failed State of the Union

I totally agree that Obama’s State of the Union speech mesmerized the American public, and terrorized Iran with a stern warning that Iran is not going to produce a nuclear bomb for as long as he his president. In his speech, Obama was as hawkish as any Republican candidate could be to win the support of worried Americans.

Never mind the gawky mouth of this Hezbollah sympathizer who wrote this piece. It’s not worth the sound of the wind that creates a sandstorm in the desert, and trouble elsewhere.

Obama’s State of the Union Address was awesome! I am not a Democrat. But any Republican opponent, except Ron Paul, will have difficulty to challenge Obama’s union address when they fight it out in the campaign trail. I took out Ron Paul because his announcement to quit is just in the corner. The Obama underground forces are helping Ron Paul win the GOP nomination so that Obama need not campaign to win his second term hands down.