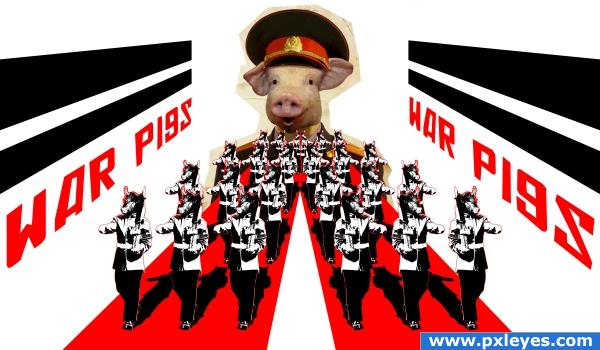 Throughout its history, America glorified wars in the name of peace. From inception, they're perpetuated against one or more domestic or foreign adversaries.

They include mass killing, assaults and abuse. Pacifism's called sissy or unpatriotic. Propaganda insists America's peace-loving. In fact, more than ever today, it's addicted to permanent war and violence.

Nonetheless, initiating them requires public support. Famed US journalist Walter Lippmann coined the phrase "manufacture of consent." It's a euphemism for mind control.

In 1917, George Creel first used it successfully to turn pacifist Americans into raging German-haters. It works the same way now. In 1916, Woodrow Wilson was reelected on a pledge of: "He Kept Us Out of War." Straightaway, he began planning US involvement.

In April 1917, he established the Committee on Public Information (CPI or Creel Committee). It operated through August 1919. Its mission was enlisting public support for war and undermining opposition sentiment.

Corporate America was so impressed, it recruited Edward Bernays, a nephew of Sigmund Freud. He became a PR/propaganda pioneer. His 1928 book titled "Propaganda" said it's possible to "regiment the public mind every bit as much as an army regiments their bodies."

"If we understand the mechanism and motives of the group mind, is it not possible to control and regiment the masses according to our will without their knowing about it?"

He called the technique the "engineering of consent." He invented the press release. One of his most successful campaigns involved convincing women to smoke in public when it was considered taboo. He pursuaded business that news, not advertising, best manipulates public opinion.

He drew on Freudian psychoanalytic ideas. In an age of mass production, he believed techniques were needed to distribute ideas the same way. On behalf of United Fruit, his propaganda campaign helped overthrow Guatemala's democratically elected Jacobo Arbenz Guzman.

His pioneering PR techniques got Supreme Court Justice Felix Frankfurter to describe him and Ivy Lee as "professional poisoners of the public mind, exploiters of foolishness, fanaticism and self-interest."

In his 1947 book titled, "The Engineering of Consent," he called it "the very essence of the democratic process, the freedom to persuade and suggest." In fact, it's used manipulatively more for ill, than good, especially in selling war.

Australian-born social psychologist Alex Carey helped pioneer the study of corporate propaganda. His seminal work is titled, "Taking the Risk Out of Democracy: Corporate Propaganda versus Freedom and Liberty."

"Throughout history, war planners have used various forms of deception to trick their enemies. Because public support is so crucial (to wage war), the home population is also subject to deceitful stratagems. The creation of false excuses to justify going to war is a major first step in constructing public support...."

"The corporate media (are) central to the success of" manufacturing consent. So is repetition to blot out other narratives. Media giants and PR wizards are master mind manipulators, marshaling public support for war.

It works the same way every time. Truth is suppressed. Public fear is stoked. Patriotism and democratic values are highlighted. People are manipulated to support war to protect national security. Wilson claimed entering WW I "kept the world safe for democracy."

During the WW II buildup, anti-war proponents were called subversives and Nazi sympathizers. Once begun, anti-German/Italian/Japanese propaganda censored media and other communications to enlist support. Other techniques included posters, advertising, comic books and cartoons, leaflets, and films extolling America and portraying the axis as bad guys.

He also showed how Truman officials redefined war as it continued with mounting casualties. His analysis used previously unavailable archives, including government documents, papers of leading congressmen, newspaper editors, and war correspondents. His book's the definitive word on how public opinion was manipulated during America's "forgotten war."

Noam Chomsky calls the Vietnam War "a classic example of America's propaganda system." Major media scoundrels let doves and hawks debate, but "(b)oth sides agreed on one thing. We had a right to carry out aggression," but refused to admit it took place.

America's presence was called defense against enemy aggression. "Like the Soviets in Afghanistan, we tried to establish" a pro-US Saigon regime. Escalation led to invasion. Anti-war activists on principle were banned from public discourse. "The debate was essentially over tactics," not legitimacy.

Over time, anti-war sentiment grew, especially after the January 1968 Tet Offensive and June 1971 Pentagon Papers release. They showed the Johnson administration lied to the public and Congress. Gallup Polls showed 70% of Americans thought Vietnam was "fundamentally wrong and immoral, not a mistake."

Opposition produced the "Vietnam Syndrome." Chomsky called it "a grave disease in the eyes of America's elites because people understand too much."

He also discussed months of propaganda preceding Congress voting on contra aid in March 1986. He reviewed 85 New York Times and Washington Post editorials and op-eds. All were anti-Sandanista. Opposition opinion was suppressed despite Nicaragua directing popular social services in contrast with repressive US allies Honduras, Guatemala and El Salvador.

Of course, all wars are based on lies. When major media scoundrels suppress truth, administrations get away with murder.

It was true in Central America, Grenada on the pretext of rescuing medical students, manufactured incidents to oust Panama's Manuel Noreiga, entrapping Saddam Hussein to invade Kuwait that launched the Gulf War, 9/11 as pretext to attack Afghanistan and continue a decade of imperial wars against nonbelligerent states.

"It's always depressing to learn that you've been had, but incalculably more so when the deception has resulted in thousands of Americans dying in the Iraq war effort" based on lies.

As in all wars, the more people rely on television for news, the less they know, and more susceptible they become to government and media propaganda.

In their book, "Weapons of Mass Deception: The Uses of Propaganda in Bush's War on Iraq," Sheldon Rampton and John Stauber showed how manipulative propaganda sold the public on war.

Combining PR and media deception, Operation: Iraqi Freedom was created. Deconstructing the process, they showed how top Bush officials planned war prior to his election, but waited until September 2002 for "product launch" to inform the public.

Using 'big lie" tactics, they associated Saddam with 9/11, forged documents to allege WMDs, and worked secretly to create the opposition Iraqi National Congress (INC). The PR Rendon Group coined the term. It got millions in funding and worked closely with CIA operatives. It became a driving force for war.

"Weapons of Mass Deception" exposed how aggressive PR and manipulative media convince people to go along with policies harming their interests.

The Pentagon's very much involved. It spends half a billion dollars selling wars. Truth's suppressed doing it. Lies launch them and continue throughout conflicts. Anti-Syrian and Iranian rhetoric replicates what preceded attacking Iraq and Libya.

Things remain the same. Deceptive reports manipulate the public mind on Syria and Iran. "There is no doubt that the mainstream media are crucial in this idea of selling that the US is going to be in a perpetual war."

"I've worked at Newsweek as well (as AP) and other major US news organizations. And what I saw, especially at places like Newsweek, was this idea that the media was actually part of the establishment. It was that the American people were to be guided more than informed."

In fact, "political solutions" are alien to America's vocabulary. War profiteers demand jingoism. A century ago people were manipulated to accept war with Cuba. William Randolph Hearst hyped the big lie about Spain sinking the battleship Maine when, in fact, a coal bunker explosion did it.

Hearst, however, told his Havana illustrator: "You furnish the pictures, and I'll furnish the war." To this day, lies launch them. They're all based on lies to get people to go along with what wouldn't be possible otherwise.

2 Comments in Response to Selling War

2 (he did this only to teach warfare to the descendants of the Israelites who had not had previous battle experience):

3 the five rulers of the Philistines, all the Canaanites, the Sidonians, and the Hivites living in the Lebanon mountains from Mount Baal Hermon to Lebo Hamath.

4 They were left to test the Israelites to see whether they would obey the LORD’s commands, which he had given their ancestors through Moses.

Why pick on America? The only reason only reason America "sells" war is that it's pretty hard for a "democracy" to cram it up the collective ass of the mass, and it's even harder to herd the peasants onto a battlefield, under the threat of death - ala the Soviets, in recent memory, and just about every so-called monarch who has ever lived.

If war wasn't made popular by constant PR and media manipulations, politicians wouldn't be able to pat themselves on the ass and a whole bunch of rear echelon career war mongers wouldn't be able top give themselves medals and play cowboys and Indians...What would they do for work? It would be real tough to get a stupid teenager to throw his or her life away if there wasn't the illusion of heroics, duty, and medals. It's doubtful tht there would be much of a volunteer military, if those who usually volunteer really knew what was going on.

America might "promote" (sell) war, but it's hardly an American "thing". Until D.C. started selling-out to America's enemies, it was impossible to defeat the american military; it still is, when the political traitors are left out of the equation. Personally, I wouldn't have it any other way. However, our enemies (United Nations, specifically) don't like the idea very much. If we continue to hire the looters and liars that we do, to keep our selves and our military in tact, we are going to come up very short. We need to get politics as far away from the methodology of national security as is possible! And, we need to get our heads straight regarding what it takes to defend our national sovereignty.

Why Are Russian Spy Planes Probing Close to Alaskan Airspace?