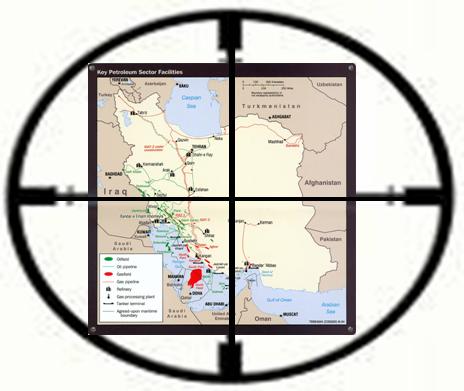 Washington's first regime change priority is Syria. At issue is isolating Iran. Then devoting full attention to replacing its current government with a pro-Western one.

At the same time, covert war's raged against Tehran for years. Destabilization tactics include fake accusations, political and economic sanctions, isolation, covert and direct confrontation, cyberwar, targeted assassinations, and other provocations short of war - so far.

Everything tried so far failed. Oil sanctions won't fare better. EU countries imposing it shot themselves in the foot. Sensible ones won't go along. Major ones like China, Russia, India and Brazil reject them. Expect Japan, South Korea and others to follow at least partially.

The more America goes rogue, the fewer allies it retains. Eventually perhaps they'll be none besides its Israeli/UK axis of evil partners and some Middle East despots.

"The United States has arrested and charged an Iranian semiconductor scientist for buying high-tech US lab equipment, a development likely to further worsen Iranian-US relations."

He authored or co-authored dozens of microchip technology scientific papers, none military related.

On January 26, San Francisco federal district court held Atarodi's bond hearing. Proceedings were closed except for attorneys and family members. Friends said he was detained on December 7 after arriving in Los Angeles by air.

Charges against him are sealed. Justice Department officials won't discuss them. An unnamed Sharif University spokesman said it involves buying ordinary US instruments available to anyone without a license. He spoke on condition of anonymity to avoid possible repercussions, adding:

"The fact of the matter is that he was just a professor, and he was trying to buy some equipment for his lab, and the equipment was very, very simple, ridiculously simple stuff that anybody can buy."

Following a brief hearing, his family said he'll be released on bail, subject to electronic monitoring. In part, it's for medical reasons. In the past 14 months, he suffered two heart attacks, a stroke, and underwent two heart surgeries.

His attorney, Matthew David Kohn, said he's been treated well in custody. He also believes prosecutors "meticulously" built their case against an innocent man. He came to Los Angeles for medical treatment from his brother's cardiologist.

Arresting Iranians for alleged embargo violations is rare. It shows how far Washington's willing to go to antagonize Iran, hoping perhaps for retaliation it can use as pretext to incite conflict.

He cited a 2006 incident involving over 50 Iranian researchers, engineers and executives. En route to a Santa Clara, CA disaster management forum, they were detained and deported because their visas were revoked. A Sharif University alumni group organized the event.

America not only plays hardball, it plays dirty. Innocent people suffer, especially Muslims falsely accused of terrorism, terrorist related charges, or other bogus ones like what Atoradi faces. Hopefully he'll weather the storm, be free and allowed to go home.

In June 2006, Iranian American Seyed Mousavi's ordeal began when FBI and IRS agents raided his home and confronted him and his family at gunpoint. Though not imprisoned, he was hounded for months.

In August 2007, things came to a head. After early morning prayers, he was arrested outside his mosque and bogusly charged with six felony counts under the catch-all International Emergency Economic Powers Act (IEEPA).

Though spurious and malicious, he was accused of doing business illegally with a Kuwaiti company linked to two Iranian ones, establishing an Iranian bank and leasing company, filing false tax returns, impeding tax collections, and illegally securing citizenship by falsifying information under oath.

Though innocent of all charges, in April 2008, he was convicted for violating America's Iran embargo, omitting group membership information on naturalization forms, and income tax evasion.

Imprisoned, he was denied all rights, isolated without reason, dehumanized and punished for being a Muslim in America at the wrong time from the wrong country.

This time, justice was only delayed. In January 2010, Mousavi was released. He still awaited a Ninth District Court of Appeals decision pertaining to immigration charges. On May 5, 2010 it came, overturning a lower court's conviction. His web site Free Seyed Mousavi announced the news, saying:

"Seyed Mahmood Mousavi is a free man and as a result of the reversal, continues to be a legal citizen of the United States."

He and his family "sincerely thank (everyone) for (their) continued support" throughout his ordeal. Justice in the end prevailed. Others aren't as lucky.

As a result, they wrongfully languish in US prison hellholes for their faith, ethnicity and nationality, not any crimes they committed.

Mousavi's a free man to explain it. He's also someone this writer knows, admires, wrote about, and discussed on air.