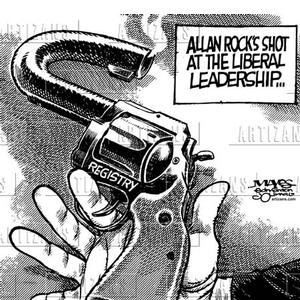 His administration's marked by secrecy, political censorship, abuse of students and faculty, and repudiation of fundamental university values.

The Canadian Civil Liberties Association reprimanded him for banning an Israeli Apartheid Week poster. He then pressured a student union president into distancing the organization from the student-run Ontario Public Interest Research Group (OPIRG). It opposes repressive Israeli practices as do growing millions.

In September 2008, Rock got the Executive Committee of the Board of Governors (EBOG) to suspend tenured Professor Denis Rancourt. In December, he recommended dismissing him and barring him from campus. In March 2009, he fired him for his principled stand on Israel/Palestine, but blamed it on his creative teaching methods.

Rancourt is a distinguished physics professor, a recognized expert in his field, and a "phenomenal teacher" according to members of the Environmental Studies Student Association.

Yet Rock twisted his innovate pedagogical approach and grading methods as pretext to fire him. He then ordered campus police to ban and remove him from campus, assigned his graduate students to other faculty members, fired his post doctoral research fellow, and summarily dismissed him without cause.

That's how despots operate. Under Rock, U of O is more police state than university. As a result, education and learning suffer.

Ironically, U of O's Vision 2010 claims it "Support(s) and recognize(s) initiatives designed to implement a range of new and diversified strategies for learning and evaluation."

In addition, Freedom of Information (FOI) documents showed he was victimized by intense illegal surveillance. A student spy and professional reporters were enlisted to produce transcripts of his academic and professional talks at other universities to use against him.

Most likely, it was the first time a university used a student to spy on a professor and like-minded students in violation of Canadian and international law.

Under Rock, U of O is a hotbed of autocratic extremism. It's also racist, according to a November 2011 lawsuit. A January 30, 2012 press release explained, saying:

Charges relate to university discrimination against foreign medical students at both provincial and national levels. It also focuses specifically on U of O abuses.

In spring 2011, plaintiffs held a press conference announcing a Human Rights Complaint against U of O. Attorneys Douglas Christie and Barbara Kulaszka represent them.

Their November 2011 lawsuit detailed charges explicitly and extensively. For example, plaintiff Khalid Aba-Alkhail AlGhaithy asked for $25 million in damages for wrongful dismissal and violation of his freedom of expression under Section 2(b) of the Canadian Charter of Rights and Freedoms, as well as Section 15(1), pertaining to issues of equality, right to equal protection, as well as benefits without discrimination.

Plaintiffs also said defendants treated them "in a high-handed and oppressive manner. The conduct of the University and the individual defendants described herein constitute such wanton and reckless disregard of their professional duties, their contractual obligation as well as their Charter obligations, and (have) caused such devastating harm that an award of punitive and aggravated damages is warranted."

Damages plaintiffs suffered include loss of income, reputation, mental distress and suffering (including depression and anxiety), loss of future employment as surgeons, and loss of time and opportunity to pursue other medical specialties.

A Toronto trial was requested. At issue is securing a neutral venue, exposing U of O administration and faculty abuses, and assuring justice is served. Nothing less is acceptable.

It Happened Again! - And This Time They're Suing!

Are Whites Really the Most Privileged Race in America?