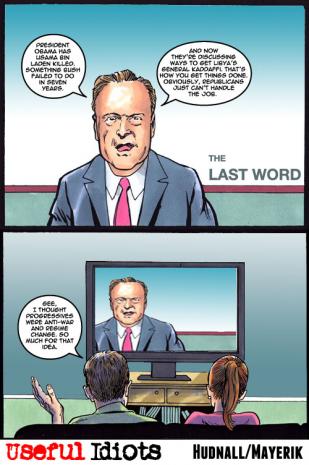 Like other major media scoundrels, New York Times writers, op-ed commentators and editorials fail the test. They're biased, shameless and irresponsible, especially on issues of war and peace.

• backing corporate interests against popular ones mattering most;

The record of the "newspaper of record" produces misinformation masquerading as real news, information and opinion. Its slogan "All The News That's Fit to Print" fails on truth and full disclosure.

Its war against Iran is longstanding. Against Syria, it's more recent. It promotes regime change in both countries. On January 31, Times writer Rick Gladstone attacked them in his article headlined, "As Syria Wobbles Under Pressure, Iran Feels the Weight of an Alliance," saying:

Pro-Western anti-Assad insurgents increased "pressure on (him) to step down...." As a result, "his main Middle East supporter, also finds itself under siege, undermining a once-powerful partnership and longtime American foe."

If Assad falls, "Tehran would lose its conduit for providing military, financial, and logistical support to Hezbollah in Lebanon and Hamas in Gaza." Both Israeli opposition groups "considered terrorist organizations by Washington, have vast arsenals of rockets and other weapons."

Neither espouses terrorism. Nor do Iran and Syria. In contrast, Washington and Israel pose grave terror threats. Both are nuclear armed and dangerous. They threaten preemptive strikes against invented threats. Neither has real ones.

Not according to Times-think. It stokes fear to promote conflict and regime change lawlessly.

Numerous articles and opinion pieces promote Washington's imperial agenda. In 2011, Libya was target one. Before that Afghanistan and Iraq. Now it's Iran and Syria.

On January 31, Times writer Neil MacFarquhar headlined, "At UN, Pressure Is on Russia for Refusal to Condemn Syria," saying:

Both sides "skirmished over a draft Security Council resolution proposed by Morocco (serving Washington) that calls for (Assad) to leave power as the first step of a transition toward democracy."

Ignored were international law issues. Among others, the 1933 Montevideo Convention explicitly prohibits interfering in the internal affairs of other countries. So does the UN Charter. Nations doing so are criminally culpable. None are more guilty than Washington, Israel, and rogue NATO partners. In contrast, Iran and Syria threaten no one.

Russia's determined to prevent it. Foreign Minister Sergei Lavrov said "Russia will not support anything that is imposed on Syria." He firmly opposes anti-Assad resolutions. He called replicating "another Libya" disastrous. China's view is similar. Both have Security Council veto power. Lavrov promised to use it.

It contradicts al Thani. It called many of the 166 team members too old and/or too ill for their task. Mission head General Mohammed Ahmed Mustafa al-Dabi praised Assad's cooperation. He also said:

"Regrettably, some observers thought that their visit to Syria was for pleasure. In some instances, experts who were nominated were not qualified for the job, did not have prior experience, and were not able to (fulfill their) responsibility."

He also ignored a "confidential account of the League's mission." Turtle Bay obtained it. It shows monitors lacked proper staff and equipment. As a result, their mission was undermined from inception.

On January 30, Russia's Deputy Foreign Minister Gennady Gatilov insisted that Security Council members are briefed on its findings. Washington and rogue allies dismissed them out of hand. They call Arab League efforts a failure, saying their report adds nothing new.

"The mission....sensed the acute stress, injustice and oppression endured (by) Syrian citizens. Yet they are convinced that the Syrian crisis must be resolved peacefully, in the Arab context, and not internationalized so that they can live in peace securely, and achieve the desired reforms and changes."

In addition, he said:

"It should be stressed (that) performance shortcomings will be addressed and remedied with further practice and guidance, God Willing."

Al-Dabi said "The mission was witness to acts of violence against government forces and citizens leading to death and injury of many. A case in point was the attack against a civilian bus which killed eight persons and injured others, including women and children."

Foreign insurgents were responsible. The Times and other Western media scoundrels quoted monitor Anwar Walek's reason for quitting the team. He called the mission a "farce," saying:

"What I saw was a humanitarian disaster. The regime is not just committing one war crime, but a series of crimes against its people. The snipers are everywhere shooting at civilians. People are being kidnapped. Prisoners are being tortured and none were released."

In response, al-Dabi said "Malek did not leave the hotel for six days and did not go out with the rest of the team into the field giving the excuse that he was sick."

In other words, he saw nothing and lied. Media scoundrels regurgitated it. It's standard practice, supporting lawless US imperialism against nonbelligerent countries.

"Any termination of the work of the mission after this short term will undermine the positive results - even if incomplete - that have been achieved so far. This may result in complete chaos on the ground (if) parties are neither qualified nor ready for the political process which aims at resolving the Syrian crisis."

Civilians, of course, always suffer most and have grievously since early 2011. Washington and complicit allies share blame.

'Not gatekeepers anymore': Meet the DeSantis spokeswoman who's striking fear in media