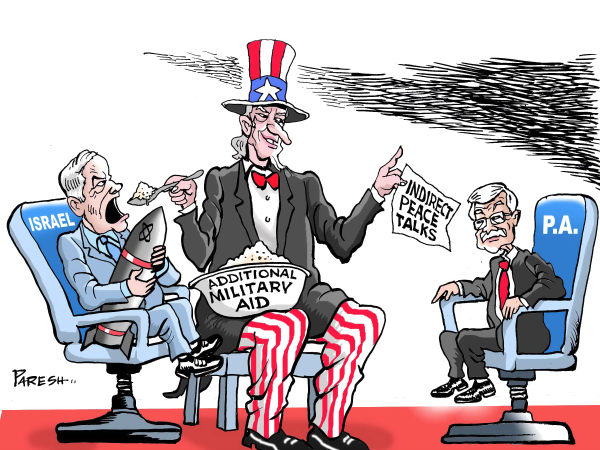 Israeli Settlements: An Obstacle to Peace

Unilaterally establishing a Palestinian state "will constitute a fundamental and substantive violation of the agreements with the State of Israel and the scuttling of the Oslo and Wye accords. The government will adopt immediate stringent measures in the event of such a declaration."

In fact, on November 15, 1988, the Palestinian National Council (PNC) proclaimed an independent Palestine. At the time, Washington provisionally recognized its independence.

According to UN Charter Article 80(1), it can't reverse its position by vetoing a Security Council (SC) resolution calling for Palestine's UN admission. Doing so is illegal, subject to further SC action under the Charter's Chapter VI.

The SC only recommends admissions. The General Assembly affirms them by a two-thirds majority. An overwhelming majority of states support de jure Palestinian membership.

Abbas could have had it last fall by petitioning the General Assembly through the 1950 Uniting for Peace Resolution 377. Not doing so revealed his longtime collaborationist credentials. As a result, the issue remains in limbo.

"The Jewish communities in Judea, Samaria and Gaza (all Occupied Palestine) are the realization of Zionist values. Settlement of the land is a clear expression of the unassailable right of the Jewish people to the Land of Israel and constitutes an important asset in the defense of the vital interests of the State of Israel."

"The Likud will continue to strengthen and develop these communities and will prevent their uprooting."

Yet international law is explicit. Fourth Geneva's Article 49 states, "The Occupying Power shall not deport or transfer parts of its own civilian population into the territory it occupies."

Moreover, in July 2004, the International Court of Justice (ICJ) ruled:

"Israeli settlements in the Occupied Palestinian Territory, including East Jerusalem, are illegal and an obstacle to peace and to economic and social development." In addition, they've "been established in breach of international law" on sovereign Palestinian territory.

It gets worse. Israel wants Green Line partitioning ended. Replacing it would be by Separation Wall annexation of 12% of Palestine when completed. Israel also wants Jordan Valley territory declared a strategic security asset. It represents one-fourth of West Bank land.

On January 28, AP said two Palestinian officials confirmed it "based on their interpretation of principles Israel presented in talks this week."

Moreover, Israel wants East Jerusalem and settlements made part of Israel. Palestinians want sovereign Palestine to include all occupied territories to their 1967 borders, including East Jerusalem as their capital. Nothing less is acceptable.

Israel's "approach" wants "settlement blocks to become part of Israel...." In fact, it's a demand, not an "approach." Bronner's framing is unsurprising. In March 2008, he joined Lone Star Communications' speakers bureau. It's one of Israel's leading PR firms. It arranges speaking dates for Bronner and suggests issues to discuss.

Others disagree based on studies showing pro-Israeli Times bias. It's how all its correspondents, op-ed and editorial writers do their jobs on all world and national issues. "Scrupulously fair" isn't in their vocabularies.

They also spurn Palestinians wanting self-determination and freedom, as well as millions of loyal supporters. None get Times or other major media print space.