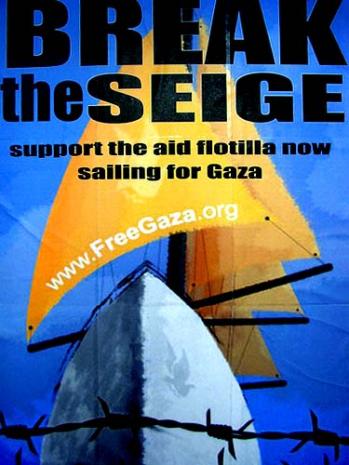 Although Oslo called Palestine one territorial unit, Israel maintains total control of people and goods movement in and out of Gaza.

In June 1989, Israel began restricting free movement between Gaza and Israel through magnetic ID cards not given former prisoners.

In 1991, Palestinians had to apply for personal exit permits. They were required to enter or leave Palestine and how long they could stay in Israel. Over time, numbers issued decreased.

In 1993, closure was imposed for the first time after Palestinians allegedly killed several Israelis. In 1994, Israel began building a fence separating Gaza from Israel. Checkpoints control people traffic. Karni crossing controls goods in and out.

In late September 2000, after the second Intifada began, Israel almost entirely prohibited Gazans from entering Israel or traveling to West Bank locations. In 2001, a no-go buffer zone was established.

It prohibits Palestinians from entering areas up to two km inside Gaza and beyond three nautical miles in their own waters. They're recognized under international law up to 12 miles plus an additional 12 miles for partial control.

Moreover, an exclusive economic zone extends up to 200 miles. Nonetheless, Palestinians venturing beyond three km or inside two km on land risk being shot, including young children.

In 2004, Egypt built its own wall bordering Gaza. In 2005, Israel disengaged from the Strip. Nonetheless, it maintains total control, irrespective of agreed on terms.

After Hamas won the January 2006 legislative elections, people traffic and goods restrictions were imposed. In June 2007, what's called siege began. Though modestly eased, it remains in place. Humanitarian missions try to breach it. Some do successfully. Others forcefully interdicted don't.

Under health crisis conditions, medical supplies and equipment are urgently needed. The ICRC says restrictions cause frequent shortages of essential to life items. Ill patients with cancer, kidney failure, and other diseases are severely impacted.

Since 1967, hundreds of thousands died needlessly. Young children below age five and the elderly are most affected. Silence is complicity. World leaders do nothing to help. Conditions still remain grave.

The Gisha Legal Center for Freedom of Movement reports regularly on siege conditions. A February 6 update headlined, "(Limited) Export(s) from Gaza, via Israel and the West Bank but not to them, is allowed once again: this time tomatoes to Saudi Arabia," saying:

Permission to send three truckloads to Saudi Arabia required a complicated expensive process. Two truckloads of tomatoes arrived at Kerem Shalom. They were unloaded and transported to a "sterile" area between Israel and Gaza.

For shipment, crates had to be arranged in one layer, instead of stacked. Another truck was needed to comply. Tomatoes experienced unseasonably warm sun while waiting. Finally, three trucks were loaded and ready. At Allenby Bridge crossing to Jordan, they were again reprocessed and repackaged to fit in two refrigerated Jordanian trucks for shipment to Saudi Arabia.

One Palestinian truck costs 500 shekels. For an Israeli one, it's 4,500 shekels. For one Jordanian refrigerated truck, it's 4,200 shekels. Abu Safer paid all fees plus an additional 6,000 shekels for waiting all day at Kerem Shalom.

On February 5, Gisha headlined, "How many Israeli work permits are granted to Palestinians? No one knows," saying:

On January 16, 2011, a petition was filed to find out after "requests made under the Freedom of Information Act to the Coordinator of Government Activities in the Territories (COGAT)" weren't answered for many months.

According to COGAT, 32,500 Palestinian worker permits are allowed. According to the Population and Immigration Authority, it's 20,100. Criteria for granting them aren't clear.

COGAT and Israel's Civil Administration provided some information but not all requested. Moreover, new documents received contained more contradictory information. As a result, a lawsuit may follow to obtain what Israel's required to supply.

On January 25, Gisha got additional documents on procedures for bringing limited amounts of construction materials into Gaza. They're allowed only for humanitarian projects managed by international organizations.

A November 2011 Office for the Coordination of Humanitarian Affairs (OCHA) report documented the devastated state of Gaza's fishing because of draconian Israeli restrictions imposed.

As a result, 3,097 fishermen are registered in Gaza today compared to about 10,000 in 2000. Half those still active depend heavily on sardine fishing. Because of restrictions, the catch declines annually. In 2011, it reached is lowest level in 12 years.

Moreover, when OCHA published its report in November, it said Gaza fishing catches overall would likely be the lowest on record. Expect 2012 to be worse.

The amount caught (437 tons) was less than one-fourth the 2006 - 2008 average. In addition, quality declined markedly. Richest areas are from five to eight miles offshore. They're off-limits to Gazans at risk of being arrested or shot, as well as having their vessels permanently confiscated.

Over-fishing within three miles depleted available stocks. As a result, thousands no long fish. Their livelihoods are lost, as well as those dependent on their enterprise. In addition, Gazans lost most of their valued food source.

World leaders yawn and ignore it. Others, like Washington, are complicit with Israel enforcing life threatening policies.