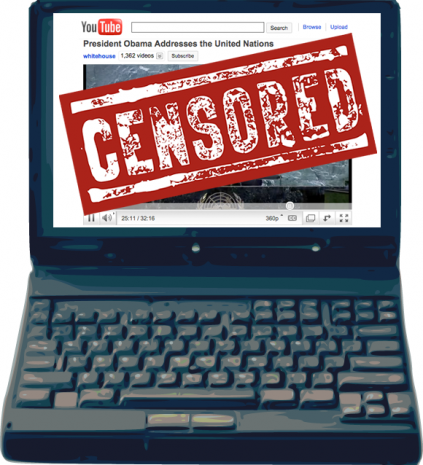 Act Up Against ACTA

The Electronic Frontier Foundation (EFF) says we've all got a "right to be furious about ACTA." Killing it's essential.

"If there's one thing....wrong with (how) government(s now function), ACTA is it," says EFF. Washington and other dominant countries drafted it. Others are pressured to comply per America's annual Special 301 process.

At issue is establishing new Internet rules, "bypass(ing) checks and balances of existing international IP norm-setting bodies, without any meaningful input from national parliaments, policymakers, or their citizens."

Moreover, the agreement creates a czar-like global "ACTA Committee." Unelected bureaucrats will oversee supranational interpretation and implementation. Arbitrary top-down rule will be imposed. In the process, democratic freedoms will be lost.

On January 26, 22 of 27 EU natons signed ACTA in Tokyo. Many steps remain before ratification. In June, the EU Parliament will vote up or down on approval.  Global activism must stop it. Jeremie Zimmerman, spokesperson for the citizen advocacy group La Quadrature du Net, said:

"In the last few days, we have seen encouraging protests by Polish and other EU citizens, who are rightly concerned with the effect of ACTA on freedom of expression, access to (generic) medicines (and safe foods), but also access to culture and knowledge."

Anti-ACTA momentum's building. Citizens "must reclaim democracy, against the harmful influence of corporate interests over global policy-making." Acting up against ACTA is crucial.

In December, the Council of the European Union (one of two EU legislative bodies representing all 27 member states) adopted ACTA during an unrelated agriculture and fisheries meeting.

In America, constitutional issues remain. Last October, Obama signed it by "executive agreement." He falsely claimed ACTA's not a treaty requiring Senate approval. By law, executive agreements apply only to sole presidential authority issues. Treaties must be ratified by a two-thirds Senate supermajority.

"The president has no independent constitutional authority over intellectual property or communications policy, and there is no long historical practice of making sole executive agreements in this area. To the contrary, the Constitution gives primary authority over these matters to Congress, which is charged with making laws that regulate foreign commerce and intellectual property."

Given its impact on America's knowledge economy and Internet, diktat presidential authority must be stopped. If enacted and enforced, corporations will control global Internet traffic. Censorship will follow. Offenders will be prosecuted. Existing laws will be undermined. So will global information flows and constitutionally protected speech.

As a result, open public debate is essential and Senate authority over foreign trade agreements enforced. So is saving constitutional freedoms. Existing laws should be enforced. Presidents have no right to violate them. Congress needs to act and enforce rule of law standards, especially on issues of fundamental freedoms.

"I want to denounce in the strongest possible manner the entire process that led to the signature of this agreement: no inclusion of civil society organizations, a lack of transparency from the start of negotiations, repeated postponing of the signature of the text without an explanation being ever given, (and) exclusion of the EU Parliament's demands that were expressed on several occasions in our assembly."

"This agreement might have major consequences on citizens' lives, and still, everything is being done to prevent the European Parliament from having its say in this matter. That is why today, as I release this report for which I was in charge, I want to send a strong signal and alert the public opinion about this unacceptable situation. I will not take part in this masquerade."

On January 26, EFF headlined, "Under Obama, the Freedom of Information Act is Still in Shackles," saying:

"My Administration is committed to creating an unprecedented level of openness in Government. We will work together to ensure the public trust and establish a system of transparency, public participation, and collaboration. Openness will strengthen our democracy and promote efficient and effective(ness) in Government."

Obama's a serial liar. "Openness" was code language for America's most secretive administration. Subverting FOIA is one of many examples of Obama's rogue governance. Secrecy and public trust betrayal trust took precedence immediately.

Moreover, in year two, a National Security Archive study found "less than one-third of the 90 federal agencies that process such FOIA requests have made significant changes in their procedures," even on transparency issues.

Yet when questioned at a town hall meeting, Obama claimed his administration's the most transparent in modern history. Public ignorance lets him get away with it and much more. EFF said government secrecy under Obama reached "absurd (unprecedented) levels."

One of many examples involves a little-known provision of financial reform legislation. It says the SEC "no longer has to comply with virtually all requests for information releases from the public, including those filed under" FOIA requests. No wonder. Wall Street crooks wrote the law to assure business as usual and more.

Similar examples affect many other agencies, including the State Department, DHS, EPA and NASA. In December 2011, Citizens for Responsibility and Ethics in Washington (CREW) and OpenTheGovernment.org found Obama's administration withheld information one-third more often than Bush in his last year in office. Imagine what's coming if he's reelected.

EFF called his Justice Department's attempt to change FOIA regulations perhaps his worst open government violation. Under a proposed rule, "instead of refusing to confirm or deny a document is in the Department's possession, the agency could 'respond to the request as if the excluded records" don't exist.

Obama's systematically trashing rule of law standards affecting domestic and foreign policies. He's killing "the very law (he) championed at the start of his administration." His transparency pledge became "a (sick joke) punch line rather than a re-election slogan."

As a result, freedom's on the chopping block for elimination unless mass public outrage stops it. There's no time to waste doing it, starting with killing ACTA.