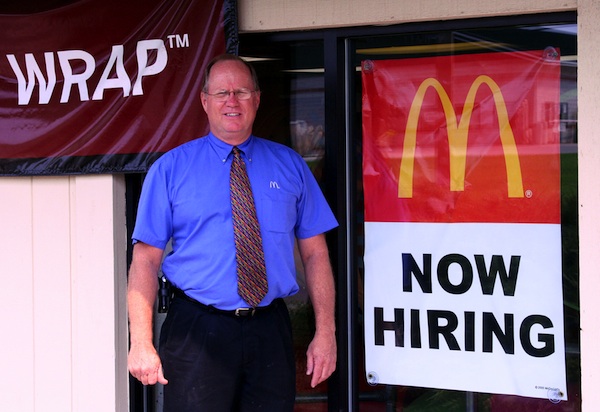 "The confidence level for the monthly change in total employment is on the order of plus or minus 430,000 jobs."

With that level of accuracy why bother reporting at all. Monthly numbers are meaningless. January's reflect the problem.

Rasmus said those allegedly created aren't actual jobs. "They represent seasonal adjustments made to the raw data...." January numbers, in fact, reflect "an anomalous massive upward revision of the raw jobs data, due to assumptions about seasonality and (alleged) new business formations."

For January, raw data showed large job losses, not gains. Included were "about 300,000 construction jobs, another 600,000" retail ones, and "400,000 in business professional services as most businesses trim their labor force at the start of the year to keep costs down." In addition, hundreds of thousands more were lost for a 2.7 million total overall.

It's an election year stunt, an official lie, turning reality on its head for votes at a time America's experiencing a Main Street Depression affecting jobs. It replicates the 1930s. True unemployment's at 22.5%, not the fake 8.3% U-3 number reported to hide the dark truth.

Headline numbers exclude discouraged workers. They want jobs but gave up looking after futile months trying. Moreover, no distinction is made between full-time employees and others forced into low pay, low or no benefit menial part-time/temp ones.

Statistically, a job is a job is a job no matter how poor or few monthly hours worked. Of course, this type reporting denigrates those unable to make ends meet in hard times. According to Census data, they represent half of US households defined as impoverished or bordering on it. That reality should shock everyone and force responsible officials to act.

Labor Department manipulation increased egregiously in the 1990s. For example, the so-called "birth-death model" estimates net non-reported jobs from new businesses minus losses from others no longer operating.

During expansions, the model works because start-ups exceed shutdowns. It doesn't in recessions. Yet BLS assumes workers from non-operating companies are still employed. In addition, it adds another 30 - 48,000 jobs monthly whether or not net new companies exist. Assuming they do when they don't is fraud.

It shows up in monthly BLS reports. They deliberately conceal reality in hard times. Its rarely mentioned U-6 figure tops 15%. It includes "marginally attached workers: people wanting jobs but not actively looking in the past 30 days, but have looked unsuccessfully in the past year."

It also includes discouraged workers who stopped looking in frustration within, but not exceeding, the past 12 months, as well as others looking for full-time work but forced to take part-time or temp jobs they'd otherwise avoid. Uncounted long-term discouraged workers (those giving up after 366 days) put real unemployment at 22.5%.

Housing's extremely important. Homes are the average US household's largest asset. Economic recovery's unlikely during a housing downturn. During a depression, it's impossible. During the greatest housing crisis since the 1930s assures protracted hard times for most people.

As a result, around 25 million Americans are unemployed. Most with jobs have poor ones. Poverty's at record levels. So is human need. Instead of addressing crisis conditions, Obama lied about the January BLS report, saying:

"The economy is growing stronger and the recovery is speeding up."

In fact, it's experiencing the hardest times since the Great Depression with no proposed policy measures to address it. Instead, austerity's planned when suffering millions need help, starting with decent jobs and living wages.

They're not around or being created. Just phantom BLS ones, creating an illusion of improvement during harder than ever hard times for growing millions. That's today's troubled reality.

"The front wheels have lifted off the runway. Now, Americans are waiting to see if the economy can truly get aloft."  The January data suggest "the recovery seems finally to be reaching American workers," despite phantom jobs denying reality.

Saying it, of course, would be spoil-sport. However, it's not only true, it reveals the grim reality of job losses, not gains.

Moreover, the employment gap between youths and working-age adults is the widest in recorded history at 15%. Since 2007, young adults with full-time jobs saw wages drop 6%. In addition, over 80% of those surveyed believe finding a job today is harder for young people than conditions their parents faced. They also expressed concerns about being ill-prepared for jobs they want for lack of education, training, or other preparation.

As a result, nearly a third went back to school. Another 25% took unpaid work or moved back with parents. One in five delayed marriage plans and child rearing. Whether or not they know it, protracted hard times for years to come will gravely impact their futures.