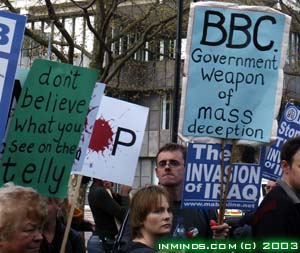 BBC: Caught in the Act

"....(P)rograms were made by third-party in pay of governments and firms."

In other words, they were propaganda, not legitimate news and information. More on the scandal below.

Throughout its history, BBC's been an imperial tool. It replicates the worst of America's major media, its NPR/PBS managed news operations, and Qatar controlled Al Jazeera on major world and national issues.

Reliability's not its mandate. Owned, operated and controlled by Britain, government officials appoint its management. Nothing fundamentally changed from 1922 inception to today. Only technology's different, not BBC's state controlled message.

It's pro-government, pro-imperial, pro-war, pro-Israel, pro-corporate, and anti-populist. Deception triumphs over truth. Step over the line and get fired.

In other words, fake information, in league with Washington, promoted war on Iraq. Exposing it got Gilligan and top management axed. New bosses replaced former ones. Seamlessly it was back to business as usual, producing propaganda instead of truth and full disclosure.

BBC will "receive a 'significant' sum of money from the US government to help (circumvent) the blocking of TV and internet services in countries including Iran and China," as well as develop early warning software to more easily detect jamming.

At the time, BBC's Jim Egan said software would help "monitor dips in traffic which act as an early warning of jamming, and can be more effective than relying on people contacting us and telling us they cannot access the services."

Proxy servers are also used to misdirect web site blockers to countries other than where broadcasts emanate.

"The minute you actually start taking the money, there is bound to be a certain element of 'he who pays the piper calls the tune.' It is a strange arrangement, and I would worry that the more complicated we make (BBC), the less pure its message can be."

Of course, BBC's tainted and disreputable, not pure. Its state controlled message serves wealth and power. EU Parliament member Gerard Batten once called it "institutionally politically biased, certainly in favour of things like the European Union, mass immigration, and a whole other 'politically correct' ideas that I think it peddles to the public."

He added that the "sponsorship of any news and current affairs TV programs (is prohibited) across the EU. Now it would appear then, that if the US State Department is going to fund BBC that would appear to be in breach of the directive."

A London Independent investigation learned how BBC's paid nominal fees of as little as one British pound for programming produced by Britain's FactBased Communications (FBC Media).

It calls itself "a European-based media and entertainment group specializing in television format creation, production and distribution."

Its activities include "current affairs content for television and airlines plus original TV format creation and quality production for the UK and international television markets in the business, economy, entertainment, sport and factual genres, as well as FBC's international sales, sponsorship and distribution of syndicated programmes."

Its clients are featured in programs made for CNBC, India, Greece, Kazakhstan, Italy, Zambia, Indonesia, Hungary, and corporations like Microsoft. Its promotional literature says it "cultivate(s)" key opinion makers, the types showing up on major media TV. It boasted that its:

As a result, on February 11, BBC apologized on air to millions of viewers. The Independent called it a "remarkable broadcast, available in 295 million homes, 1.7 million hotel rooms, 81 cruise ships, 46 airlines, and on 35 mobile phone platforms," as well as anyone worldwide online.

Given BBC's longstanding government controlled mandate, it apologized tongue in cheek for breaking "rules aimed at protecting our editorial integrity." In fact, it got caught with its pants down.

Later she disingenuously claimed she didn't "remember minute-by-minute what she saw." Of course, neither she or BBC could explain how an event was reported before it occurred. BBC knew in advance, but erred by informing viewers too early.

The Independent concluded its report, saying:

It's "working on establishing the extent of the company's assets (to) maximize any potential return to the ex-employees and other creditors. As with any insolvency, the circumstances surrounding and the reasons for they company's failure will be fully investigated in due course."

1 Comments in Response to BBC: Caught in the Act

BBC also wrote Holy Blood Holly Grail of Da Vinci Code's use that behind the scenes is trying to connect Rennes Le Chateau France to my ancestors' stone-masonry Rosslyn Chapel, Scottland.  They are using it as the Mormon banking arm covert religion to bring us all to one world government under the Vatican-and don't be fooled into thinking that they are opposition.  Because when I did my homework, I learned that the Book of Mormon is quite likely a Vatican creation.

This propaganda is passing off a covert Mormon lie (Mormons generally aren't even aware yet, although they have been pre-cursored by their leadership in their own publications) that Jesus and Mary Magdalene had children.  This lie got my father Murdered, and has destroyed any chance that I ever had of a Normal life.  And we have people like Mitt Romney to thank for making sure that their money changing will carry on and eventually introduce such a lie as some world discovery, or it is looking like the back up plan might be aliens.  Hang on tight people, the elites (that burned my ancestors at the stake Friday October 13, 1307 don't know where to hide.  Thank God for the internet.

What you witness here on this site is a grail of slander and cover-ups by people who pretend to be for our liberties that are scamming you.  I was previously #44164, then #45147, and now this number.

Donna Hancock, on the other hand, is probably the most genuine reporter I've seen thus far.

This is Kim Dyer (for when they remove my name again...  I won't give up.  I will not sell out to this lie.  And as far as I am concerned, until I see any evidence to the contrary from my family, my Grandmother Ruth Mary Sinclair Dyer,  it is a lie.  Friend me on Facebook.  I wear a white Porsche baseball cap.  I like to keep people aware.  I do have a vat background in law, legislature, sociology and political science.... So I know just enough to be dangerous, or at least to keep it interesting.  I live in Tempe, Arizona.

'Not gatekeepers anymore': Meet the DeSantis spokeswoman who's striking fear in media