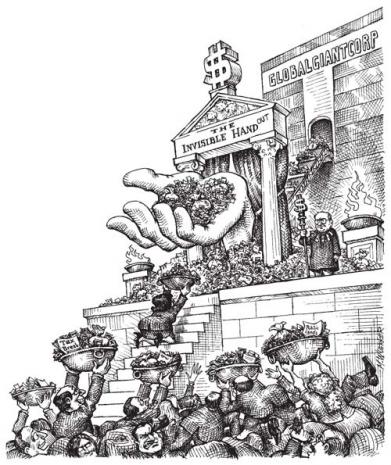 • cutting fast disappearing monthly unemployment benefits from 460 to 360 euros; and

• reducing pensions many Greeks need to survive by 15%.

At issue is securing another 130 billion euro bailout. The more financial aid Greece gets, the greater its debt, the harder it is to repay, the more future aid's needed, and deeper the country's economic abyss heading for total collapse.

• the center-right New Democracy under Antonis Samaras; and

• the hard right Popular (or People's) Orthodox Rally (LAOS) lead by Georgios Karatzaferis. Until now, it went along.

Ahead of the vote, Karatzaferis said:

"It is unacceptable that right now our politicians' petty political and public relations maneuvering should be leading the country to bankruptcy."

"The country is tumbling towards a cliff-edge, and a tough European establishment is putting out the view that Greece cannot be saved and lacks credible politicians. Our politicians back that view with their carryings-on."

Most often on issues of banker capitulation, differences among the three are largely rhetorical. This time LAOS broke with coalition unity.

Nonetheless, at midnight on Sunday, after hours of perfunctory debate, MPs rubber-stamped measures (199 to 74 with 27 abstentions) party leaders agreed on earlier despite tens of thousands raging in Syntagma Square outside parliament throughout the day and night.

Greece's working class faces impoverished neoserfdom. Those on pensions have less than ever to survive on, and the nation's youths have no futures.

Banker appointed prime minister Lucas Padademos, a former ECB vice president, lied saying "living standards of Greeks would collapse and the country would be dragged into a spiral of recession, instability, unemployment and misery" unless predatory cuts are made.

He lied again claiming pernicious austerity measures will "restore the fiscal stability and global competitiveness of the economy, which will return to growth, probably in the second half of 2013."

As a result, capital flight's increasing. People are voting with their feet and leaving. Those remaining face hospitals short of medicines, unprecedented homelessness and hunger, schools without basic supplies, and imagine what's coming when new cuts are implemented.

Moreover, bankers demand more. So far, mandated wealth confiscation alone is their only excluded diktat, but it's happening incrementally. Under systematic sacking, Greece's life force is dying in meltdown.

Months earlier, IMF loans deepened the country's burden. Finally, $100 billion in debt was restructured. In 2005, it was completed on a take it or leave it basis.

Stiff haircuts were imposed on creditors of around 65%. Most decided something was better than nothing. In 2010, holdouts finally capitulated on similar terms.

Sustained economic growth followed from 2003 through 2007. Vital debt restructuring and a devalued currency assured it.

Greece and other troubled Eurozone countries can relieve their burdens the same way. At issue is reclaiming sovereign rights by reinstating their pre-euro currencies. They never should have sacrificed them in the first place.

Instead, it's entrapped by foreign bankers demanding tribute at the expense of mercilessly exploiting the nation's working class, youths, and retirees.

It operates like pillaging armies, seizing land, infrastructure, other tangible assets, and all material wealth. In the process, countries and ordinary people are devastated.

Greece is effectively bankrupt. Only its obituary remains to be written. Its people have a simple choice - leave or rebel.

By whatever means necessary, replacing them is crucial. Nothing else can work, and delay only exacerbates intolerable conditions.