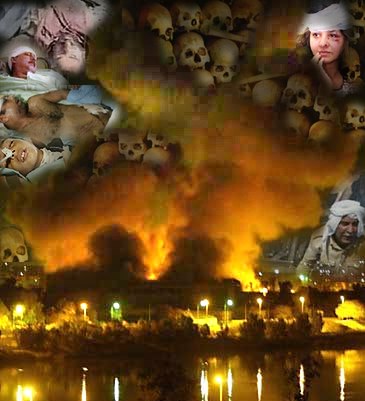 Out of Control Violence in Libya

America got another bloodstained imperial trophy. Keeping it's another matter. Green Resistance continues its liberating struggle.

Better late than never explaining NATO's legacy. AI's 2011 account misreported "The Battle for Libya." It pointed fingers the wrong way. It blamed Gaddafi for NATO aggression. It falsely accused him of "kill(ing) and injur(ing) scores of unarmed protesters."

It added "serious violations of international humanitarian law (IHL), including war crimes, and gross human rights violation, which point to the commission of crimes against humanity."

No nation may interfere in the internal affairs of another except in self-defense if attacked. NATO claimed responsibility to protect authority as Trojan Horse deception for war. Crimes of war and against humanity followed.

"Militias....continue to seize and detain people, outside any legal framework, and hold them in secret detention centers...." Thousands have no way to challenge out-of-control lawlessness or escape from brutal torture.

Detainees AI interviewed described their harrowing experience. They were:

Medical reports confirmed their accounts. With rare exceptions, detainees aren't tried or given access to lawyers. Several said they confessed to uncommitted crimes to end pain. Others were too scared to speak. NATO and NTC stooges know what's going on and do nothing.

"(T)he NTC-led transitional government appears to have neither the authority nor the political will to rein in the militias. (They're) unwilling to recognize the scale of militia abuses, at most acknowledging individual cases despite the mounting evidence of patterns of grave, widespread abuses in many parts of the country."

As a result, ongoing torture and mistreatment continue. AI also exaggerated Gaddafi era crimes and ignored his mass public support. At the end, it was overwhelming, and today most Libyans yearn for him back.

NATO and illegitimate NTC officials spurn human rights and international law principles. Scheduled elections are cover for imperial occupation. Crimes of war and against humanity won't be punished. As a result, they continue daily.

Dark-skinned Libyans are especially threatened. Thousands in Tawargha and elsewhere were forcibly displaced. They still can't return, and their homes were looted and burned. As a result, those not held captive are in "poorly resourced" camps in Benghazi, Tripoli and elsewhere.

Many other Mshashiya and Qawalish tribe members, as well as Sirte, Bani Walid, and other residents, remain threatened by killer gangs. Revenge killings and other abuses continue. However, Green Resistance struggles to liberate Libya and restore Jamahiriya rule.

AI visited Libya in January and February 2012. Its researched focused in and around Tripoli, al-Zawiya, the Nafoussa Mountains, Misrata, Sirte and Benghazi.

They visited 11 detention centers in central and western Libya under insurgent gangs control. In at least 10, detainees were tortured and mistreated. AI interviewed them, those released, facility administrators, doctors and other hospital staff, relatives of people killed in custody, militia members, and NTC officials.

Exact numbers of detainees held and mistreated aren't known. However, thousands remain imprisoned. ICRC representatives said they "visited over 8,500 detainees in about 60 places of detention." Most were held in and around Tripoli and Misrata.

Many detainees said they were held at multiple locations. Some were secret. AI witnessed insurgents beating and threatening them, including some whose release were ordered.

One man said he was forced to lie on his back, hands and feet tied to the frame. "In this position, (he) was beaten with fists on (his) face. Then they beat me with a plastic hose on my feet."

"Later, I had to turn around face-down and was tied to the bed. In that position, I was beaten again with a hose on my back and on the head. I was also subjected to electric shocks to various parts of my body including my left arm and chest."

Last September, they promised "to bring any armed groups under official authorities and (to) fully investigate any incidents brought to (their) attention."

According to AI, "(t)his pledge has not been fulfilled. As long as defense lawyers and judicial authorities have no access to thousands of (detainees, they) remain held without trial or any means to challenge the legality of their detention...."

Today's Libya is charnel house hell. It's the same wherever NATO intervenes. Afghans, Iraqis, Syrians, and other victims know its horrors. As a result, their liberating struggles continue.