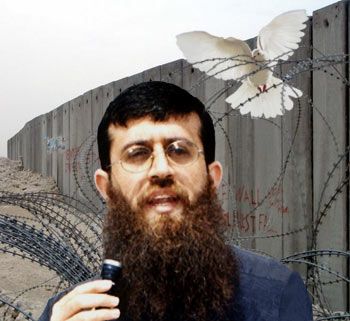 Day 62 and counting. Adnan's hunger strike continues. On February 15, Israel let his wife Randa see him for the second time.

She said "(h)is health has drastically deteriorated from the last time I saw him" a week ago. "I expect the worst. He insists on continuing with the hunger strike." He wants to live but will die for justice.

He also contacted Washington, EU Secretary-General Thorbjorn Jagland, and France. Nothing so far materialized. Western leaders provide one-sided support for Israel. Expect nothing from them for Adnan.

He's held administratively without charge. He committed no crimes yet faces imminent death. He lost over a third of his weight. His life force is slowly ebbing. His muscles, heart, stomach, and immune system are dying.

His entire system could stop functioning any time. Israel wants him dead. So far, pleas on his behalf are ignored. The Palestinian Council of Human Rights Organizations (PCHRO) called for emergency action to save him. So did Samidoun, the Palestinian Prisoner Solidarity Network. It demanded his immediate release before it's too late.

On February 16, the Carter Center "called on the Israeli government to immediately charge or release" Adnan. His "case highlights the inconsistencies of Israel's administrative detention policies with internationally recognized rights to due process."

On January 24, the Carter Center denounced Israel's arrests of Palestinian legislators, including PLC Speaker Aziz Dweik. Uncharged, he and others were sentenced to six months administrative detention.

"These men are guilty of nothing more than winning a parliamentary seat in an open and honest election, which was monitored by the Carter Center in (January) 2006."

"The detention of Speaker Dweik and other Palestinian legislators appears to be an attempt to hamstring the PLC in order to prevent Palestinian reconciliation and a prospective election later this year. We urge that (they) be released."

"The EU requests the government to do all it can to preserve the health of Mr. Adnan and handle this case while abiding by all legal obligations under international law. The EU reiterates its longstanding concern about the extensive use by Israel of administrative detention without formal charge."

Arbitrary administrative detention (AD) is illegal. Prisoners may be held indefinitely. They aren't told why. Alleged secret evidence is unavailable to defense lawyers. They can't dispute it, examine witnesses, or present contradictory evidence refuting it.

AD's permitted only "in time of public emergency which threatens the life of the nation," and only for the shortest possible time.

Israel uses it indiscriminately. Hundreds are imprisoned this way. AD should never substitute for customary criminal proceedings, except during short-term emergency conditions.

Adnan's one of hundreds of victims. After Friday prayers, thousands rallied supportively for him in Gaza. Crowds chanted, "We are all Khader Adnan." Hundreds also demonstrated in Jenin and other West Bank cities and towns. So did hundreds more in Israeli prisons.

"Shame on the nations of hundreds of millions (of Muslims) for the fact that Khader Adnan is still in prison."

An IDF spokesman lied saying Adnan "threaten(ed) regional security." In fact, he owns a bakery, fruit and vegetable shop. Calling himself a local leader, he served as Islamic Jihad's spokesman. He committed no violence or other crimes.

"The Palestinian people, with all its components and its factions, will never abandon the hero prisoners, especially those who lead this hunger strike battle."

Physicians for Human Rights-Israel said his health remains at risk even if he starts eating because his system's acclimated to no food.

After two months without food "shackled to bed in an Israeli hospital," he risks imminent death. Petitioning Israel's High Court for help, one of his lawyers, Mahmoud Kassandra, said:

"This is the last chance. The medical report says he could die at any minute. We hope this will succeed but I am not optimistic."

So far, no Court hearing's been scheduled. It rarely intervenes in these type issues, but can convene on short notice other times.

Hundreds of Palestinians are held administratively without charge. "Many protesters say Adnan has become a symbol of Israel's occupation and its treatment of prisoners."

In mid-December, Adnan was seized violently "at 3:30am by some scores of Israeli military and security personnel who surrounded the family home" south of Jenin.

Weak after two months without food, he faces "immediate danger of death." Though activist for years, "his family insists that he has never been involved in violence; nor has he been charged with it. Indeed, on this occasion, he has not been charged with any crime."

He's Palestine's Bobby Sands and an Arab Street hero. He declares his honor's "more precious than food." His sister Maali called him a model father who "loves life" and "wants to end administrative detention."

His wife Randa said he told one of his lawyers, "I do not want to go to oblivion or death. But I am a man who defends his freedom. If I die it will be my fate."

In a letter written earlier, Adnan said the following:

"I started my battle offering my soul to God almighty and adamant to go ahead until righteousness triumphs over falsehood. I am defending my dignity and my people's dignity and not doing this in vain."

"The Israeli occupation has gone to extremes against our people, especially prisoners. I have been humiliated, beaten, and harassed by interrogators for no reason, and thus I swore to God I would fight the policy of administrative detention to which I and hundreds of my fellow prisoners fell prey."

"Here I am in a hospital bed surrounded with prison wardens, handcuffed, and my foot tied to the bed. The only thing I can do is offer my soul to God as I believe righteousness and justice will eventually triumph over tyranny and oppression."

"I hereby assert that I am confronting the occupiers not for my own sake as an individual, but for the sake of thousands of prisoners who are being deprived of their simplest human rights while the world and international community look on."

"It is time the international community and the UN support prisoners and force the State of Israel to respect international human rights and stop treating prisoners as if they were not humans."

A supportive Voice from Palestine letter to him said, in part:

Palestinians, the Arab Street, and thousands worldwide support him in solidarity. We're all Khader Adnan.