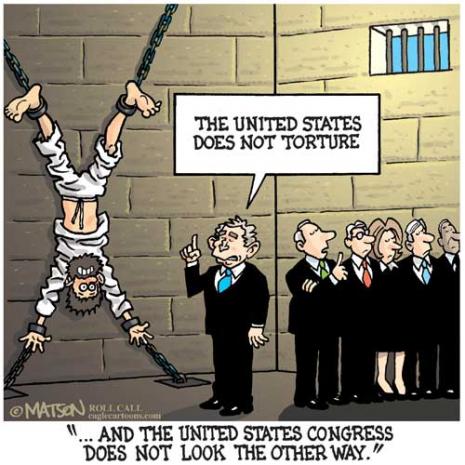 The Public Committee Against Torture in Israel (PACTI) "believes that torture and ill-treatment of any kind and under all circumstances is incompatible with the moral values of democracy and the rule of law."

An earlier 2009 PACTI report discussed the practice and systematic disregard of hundreds of complaints filed from 2001 - 2009.

No investigations followed over 700 earlier complaints filed. Israel whitewashed and forgot them for two reasons: "either denial or justification under the necessity defense doctrine," even though international law prohibits torture at all times, under all circumstances, with no allowed exceptions.

No matter. Lies substitute for truth, full disclosure and justice. They're not in Israel's vocabulary. Instead, statements like: "There is no basis for your complaint" are common.

Brutality against and justice denied Jihad Mughrabi was typical. In his sworn affidavit, he said:

"I tried to cover my face in order to protect it from their blows. They struck me with their fists and kicked me in the legs. I was lying on my side covering my face with my hands and arms."

"They also struck me with their guns, with the butts of their guns with the wide back portion of the gun. They used the guns in this way to strike my head and not my body. At times I felt very faint. They saw I was fainting all the time. I felt I lost consciousness."

"I was bleeding profusely from the head, and also from my mouth. There were cuts on my face as a result of their punches. For the first few days afterwards, I could not swallow because of the pain."

Over two and a half years after a second complaint on his behalf, Israeli's legal authorities lied, saying:

"The inquiry shows clearly that the complainant was the one who violently attacked the security personnel of the ISA....Your detailed complaint and the complainant's account of events....are inconsistent....and should therefore be rejected."

No documentation accompanies these type responses. As a result, systematic coverup and lies are compounded. Victims bear the burden of proof. Their version of events are denied. Absent independent inquiries, justice nearly always is denied.

A core effort involves a February 2011 petition. It challenges the Attorney General's (AG) comprehensive referral of torture complaints to the Inspector of Interrogee Complaints (IIC - an ISA agent). Its arguments are as follows:

(1) By law, the AG must refer all torture complaints to proper authorities.

(3) AG actions violate the responsibility to investigate all torture complaints, as established under international law.

At the same time, it established a huge loophole, empowering the AG to devise guidelines for treating "ticking bomb" cases.

In other words, extremis exceptions lie in the eyes of beholders to define as they wish. As a result, torture and ill-treatment got de facto approval even though international law is firm. Israel circumvents it and its own. The most egregious practices follow.

On February 15, PACTI petitioned on his behalf. The case involved ISA agents admitting they acted contrary to approved procedures by staging a hoax to extract a confession. Sweiti was told his wife and father were detained.

"As a rule, in a situation when a family member of the detainee is not in detention, and there is no legal reason to detain him or her, it is not appropriate to make the interrogee believe the family member is under detention."

As a result of subjecting him to extreme psychological pressure, Sweiti made repeated attempts on his own life. Psychological evaluation determined he suffered severe emotional harm.

In response to the High Court Petition on his behalf, Israel disputes PACTI's demands for a criminal investigation. It argued the complaint should have been requested initially.

PACTI hoped possible changes might come in how interrogee complaints are examined. For example, in November 2010, Israel's AG announced plans to shift ICC responsibility from the ISA to Justice Ministry. Nonetheless, he left critical issues unaddressed.

Since April 2011, PACTI fruitlessly sought documents not provided. It wanted details on a possible policy shift. Finally, in late October, proposed plans were confirmed but not implemented. It suggests cosmetic ones only coming, not real accountability.

"To this day, the official charged with examining complaints of torture against his own colleagues in the ISA continues to deem these unworthy of criminal investigation, with the unquestioning endorsement of the Israeli legal authorities including the Attorney General."

The clearest information on Israel's ISA accountability comes from Deputy State Prosecutor Shai Nitzan's testimony before the Turkel Commission. It was established to whitewash the May 31, 2010 Mavi Marmara massacre.

Defending current practices, he dismissed complainants as "interested parties (with a) basic resentment against the State of Israel." As a result, they stand to benefit from submitting "frivolous" complaints.

He also claimed "many times those who file complaints are interrogees who confessed during interrogation to committing security offenses against the State of Israel."

ISA interrogations are exempt from audio or visual documentation. Detainees are held incommunicado for long periods. A culture of lies and coverup follows. Torturers are unaccountable. As a result, Nitzan's explanation is "entirely unacceptable."

Israeli policy makers know what's going on and protections in place for ISA torturers. Nonetheless, expect cosmetic measures at best ahead addressing them. Safeguards with teeth won't be included.

Israel's had impunity for decades. It's long past time that ended. Pressure alone may succeed. It's vital to sustain it unflaggingly until what can't be tolerated ends.