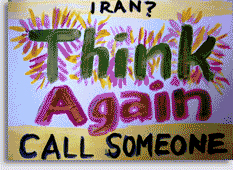 For months, Iran faced baseless accusations. They include:

• being the "world's leading state sponsor of terror," according to AIPAC;

• targeting Israeli officials in India, Georgia, and Thailand; and

All of the above don't pass the smell test. Charges are baseless on their face. Yet major media scoundrels headline them for days. In the process, they heighten tensions for belligerent intervention.

Moreover, they ignore past US/Israeli terrorist attacks blamed on Arabs, and both countries' notorious histories of targeted assassinations and other destabilization schemes.

Former National Security Advisor Zbigniew Brzezinski believes Iran may be blamed for a false flag on US soil to justify war. Former Marine Corps Intelligence/CIA case officer Robert David Steele expressed the same view. So do others to give America and Israel the war they want, no matter the potential catastrophic consequences.

Since the 1980s, Washington planned regime change. Israel offers ready support. As a result, war on Iran's been ongoing by other means.

They include computer viruses and other cyber attacks, other sabotage, multiple rounds of sanctions, attempts to cripple its central bank and oil exports, targeted assassinations, deadly explosions, sophisticated satellite, drone, and other type spying, bogus accusations, imposing a virtual blockade to isolate Tehran, and ongoing saber rattling stopping just short of bombs away.

When Washington's planned regime change train leaves the station, it doesn't stop until mission accomplished by whatever means necessary. Against Syria and especially Iran, it literally risks WW III as Russia and China may intervene to protect their own vital interests.

Iranians were detained after "an explosion tore the roof off their rented house...." Despite no credible evidence, they're suspected of targeting Israeli diplomats. According to Thai police chief General Prewpan Dhamapong:

"This much I can tell you - the target of the operation was specifically the Israeli diplomatic staff."

Again, accusations without credible evidence are baseless. With nothing to gain and everything to lose, Iran painstakingly avoids provocations. In contrast, Israel benefits greatly. Moreover, the India/Georgia/Thailand attacks bear classic Mossad fingerprints. Yet no Western reports suggest it.

Instead, fingers point spuriously one way. In Thailand, police discovered explosive devices in the suspect's rented house. They were similar to those used in India, Georgia, and Mossad attacks on Iranian nuclear scientists.

Tehran officials called accusations baseless. Foreign Ministry spokesman Ramin Mehmanparast said "We categorically reject the accusations made by the Zionist regime. They are part of a propaganda war. Iran condemns all acts of terrorism."

"Regarding the explosions that took place in India, Georgia and Thailand, I can tell you categorically that Hezbollah had nothing to do with them."

Iran was just as emphatic denying what's clearly baseless and part of longstanding Washington/Israeli efforts to isolate and punish Tehran for their own imperial gain.

Yet The Times said unnamed "Middle East experts" suspect "Iran and Hezbollah have denied involvement partly to distance themselves from the suspects who botched the plot, which had the appearance of sloppy amateurishness."

Failing back to back in three countries raises obvious red flags. Israel perfected the art of killing. It's also skilled at manufacturing incidents avoiding them. Blaming Iran and Hezbollah for classic Israeli state terror is spurious. Yet screaming headlines highlight baseless accusations.

Notably Iran has close relations with India and Thailand. They're valued trading partners. New Delhi said Iranian oil purchases will continue. Moreover, a large trade delegation's coming to Tehran. Obviously the Islamic Republic has everything to lose and nothing to gain by launching terror attacks on Indian and Thai targets. It ludicrous to say so or against Georgia. Blame Mossad with everything to gain, not Iran.

If Iran wants to retaliate for Mossad's assassinating five nuclear scientists, "it has other means at its disposal. It is hard to imagine that (Tehran) would send Iranian operatives to friendly countries, completely equipped with Iranian money and passports - making the case against them as obvious as possible."

Israel and Washington both admit Iran's Revolutionary Guards are highly trained professionals. Why "would they launch such a clumsy and self-defeating operation?"

And why against three friendly countries at a time Washington/Israeli pressure targets the world community to isolate Iran.

Yet Israeli officials blamed Tehran. Netanyahu spuriously accused Iran of being "the biggest exporter or terror in the world." In fact, the Washington/Israeli/UK axis holds that distinction unchallenged.

Nonetheless, Netanyahu added that Israel "will continue, with local security, to act against the international terror which Iran produces." Foreign Minister Avigdor Lieberman made similar comments. So did other Israeli officials, pointing fingers away from themselves with major media support.

As US National Security Adviser Tom Donilon arrived in Israel for talks on Iran's nuclear policy, "a senior US official" told Haaretz, "on condition of anonymity," that signs point to a likely Israeli strike. "We think that Israel still has not decided whether to attack or not," he said, "but it is clear to us that it is being considered seriously."

Both countries threaten war to achieve what world leaders should denounce. Instead, most go along subserviently, no matter the grave risks. As a result, humanity hangs in the balance.