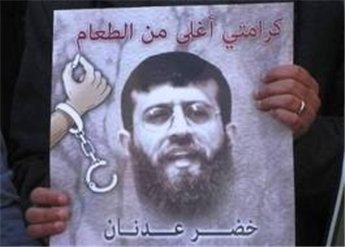 Adnan didn't confirm it, and so far his lawyer didn't comment. The Palestinian Prisoners Society (PPS) has no information to report.

"Palestinian prisoner Khader Adnan announced Tuesday that he will be ending his 66-day hunger strike after Israel agreed to release him."

"There is a deal. (Adnan) will stop his hunger strike. They will not extend his administrative detention and he will be free on April 17."

As a result, Israel's High Court cancelled its scheduling Tuesday mid-day hearing, "avoiding a high-profile examination of the issue of detention without (charge) or trial."

It's high time that issue was addressed and ended. Administrative detention is only warranted under emergency conditions for the shortest possible time. Israel abusively uses it.

Hundreds are held lawlessly uncharged for indefinite periods. Due process and judicial fairness are denied. It's unconscionable that Israel's Supreme Court hasn't ruled the practice illegal. In fact, it's upheld it for decades on bogus national security grounds.

"For the sake of his family, we will not release any additional information until we have confirmation from Khader Adnan."

Addameer also said his attorney Samer Sam'an is outside his Safad Hospital detention location "being denied permission to see" him.

Adnan "will finish his sentence on April 17, if there's no new evidence. If he returns to violence & and terror, he will be arrested again."

He added that Israel's High Court didn't order him released.

Adnan, of course, committed no crime and wasn't charged. Suggesting it highlights Israeli oppression against millions of Palestinians and Israeli Arabs.

For decades, hundreds of thousands were wrongfully imprisoned for praying to the wrong God and wanting to live free on their own land in their own country. Israel calls it terrorism.

After ignoring him throughout his ordeal, US major media scoundrels finally noticed. On February 20, ahead of his now cancelled Israeli Supreme Court hearing, The New York Times reported it instead of highlighting the injustice all along with decades of Israeli oppression.

On February 21, the Washington Post said he's "call(ing) off his hunger strike in deal with Israeli authorities." Scant other information was provided.

Adnan symbolizes Israeli ruthlessness. Whether he'll pull through after 66 days without food isn't sure. If not, will major media scoundrels notice or care.

Many thousands of other lost Palestinian lives never mattered. Neither did millions imperial America took. Their agenda supports wrong over right. It shows up daily in print and on air.

Adnan's willing to die for justice. They're indifferent whether he lives or dies. Others like Adnan put it all on the line for what's right.

Live or die, he's a legend in his own time, a symbol of what's worth fighting for and why it matters.