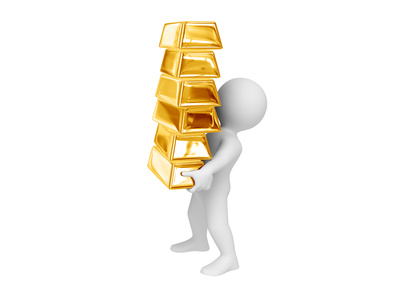 It seems that the mainstream investment community only takes a break from ignoring gold to berate it: one of gold’s most outspoken critics, uber-investor Warren Buffett, did so recently in his latest shareholder letter. The indictments were familiar; gold is an inanimate object “incapable of producing anything,” so any investor holding it instead of stocks is acting out of irrational fear.

How can it be that Buffett, perhaps the most successful (and definitely the most well-known) investor of our time, believes that gold has no place in an intelligently allocated investment portfolio?

Perhaps it has something to do with his mentor, Benjamin Graham.

Graham, author of Security Analysis (1934) and The Intelligent Investor (1949), is correctly respected as one of history's most knowledgeable investors. Over a career spanning 1915 to 1956, he refined his investment theories, in time becoming known as the father of value investing. Much of modern portfolio theory is based upon Graham’s work.

According to Graham, while no one can tell the future, there are periods when the valuations of stocks and bonds would deviate from fair value by becoming excessively over- or undervalued. To enhance returns and reduce risk, investors should alter their portfolio allocations accordingly. A quick look at a long-term chart supports Graham's theory clearly shows periods when one asset class offered a better value than the other: But what of the periods when both stocks and bonds stagnated or fell together? For much of the 1970s and again from 2001 through today, any portfolio allocated solely between stocks and bonds would have at best treaded water and at worst drowned in a sea of stagflation. To earn any real return, an investor would have needed to seek alternatives.

It’s clear from this next chart that gold was exactly that alternative, a powerful counter-trend investment for periods when both stocks and bonds were overvalued. Yet gold is conspicuously absent from Graham's allocation model. But this missing asset class is entirely understandable: for most of Graham's adult life and the most important years of his career, ownership of more than a small amount of gold was outlawed. Banned for private ownership by FDR in 1933, it wasn't re-legalized until late 1974. Graham passed away in 1976; he thus never lived through a period in which gold was unmistakably a better investment than either stocks or bonds.

All of which makes us wonder: if Graham had lived to witness the two great bull markets in precious metals during the last 40 years, would he have updated his allocation models to include gold?

We can never know.

We can know, however, that given Graham's outsized influence on investment theory, there is little question that his lack of experience with gold, and therefore its absence from his observations, has had a profound effect on how most investment professionals view the yellow metal. This, in our opinion, goes a long way toward explaining the persistently low esteem in which gold is held by the mainstream investment community. And, as a consequence, its widespread failure to even be considered as an asset class.

A couple of takeaways: first, perhaps now you can stop wondering why your broker, the talking heads in the financial media, and Warren Buffett continue to misunderstand gold as a portfolio holding. More importantly, however, is that in order to have sustained, long-term investment success, one must accept that an intelligent portfolio allocation needs to include not two but three broad categories of investment – stocks, bonds and gold, with the amounts allocated to each guided by relative valuation.

Investors who understand this tenet have an almost unfair advantage over other investors as it allows them to get positioned in gold ahead of the crowd and enjoy the bulk of the ride, while others sit on their hands.

So when you hear commentators ridiculing gold as a barbarous relic, lamenting that they cannot eat it or smugly asserting that it produces nothing, rest contently in knowing that they’re operating with a severe handicap in their own portfolio. Meanwhile, we’ll prosper, armed with the understanding that gold fulfills a very important and specific purpose in a portfolio, namely as real money that protects net worth during periods marked by excessive government debt and currency debasement such as we are currently experiencing.

Given the powerful influence of Ben Graham and his disciples, his curse on gold will not go quietly into the night. But it should.

David Galland is managing director of Casey Research, which provides independent investment analysis on a subscription basis to a global network of over 180,000 self-directed investors and money managers. Recognizing the emerging bull market in gold early on, in the late 1990s, Casey Research formed a metals and mining division that has grown into a leading provider of actionable gold and resource intelligence. For investors looking to become familiar with the asset category, Casey Research offers a monthly newsletter, BIG GOLD (try it risk free for 90 days), focusing on undervalued opportunities in mid- to large-cap producers, as well as best practices in buying, holding and selling precious metals. Learn now why it's more important than ever to invest in gold and gold-related equities.

1 Comments in Response to Ben Graham’s Curse on Gold

More the Buffet lemmings delay, the more opportunity for those who value gold as money. For me gold is money, a way to hold wealth and occasionally a speculative investment.

Only when Buffet fiddles as the American middle class burns under hyper-inflation will Buffet hesitate. But even here he may say this is just a passing aberation. If so he would be wrong because the corruption of corruptible, inflateable money and its collapse is not an aberation but an ordinary, predictable fact of life. As predictable and ordinary as people's blindness to this (final outcome of money)

Let's not forget what Buffet's flagship, the cash cow he literally inherited from Graham, GEICO stands for: Government Employees Insurance Company. Little wonder that Buffet is so pro-government protection and control. Also, according to a biography, he almost lost everything when he bought a big investment company (Bear Stearns? Goldman Sachs?) decades ago but was helped out by some sympathetic federal bureaucrats. As a consequence he may very well be beholding to our federal government which would explain all this nonsense of more government control and more taxes for the rich, etc.