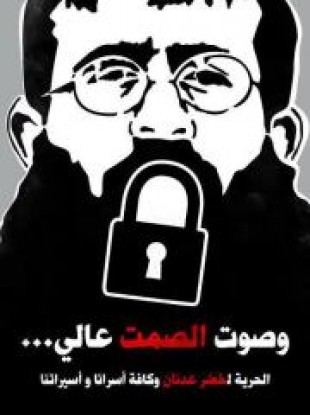 Adnan symbolizes decades of merciless Israeli repression. He preferred death over living under its ruthless boot.

Now, after Israel's promised April release, he struggles to live. Physicians for Human Rights-Israel (PHR-I) examined and him several times during Safed Hospital captivity. He's still there in deteriorated condition.

Sixty-six days without food left him perilously close to death. After he agreed to again ingest food, PHR-I said he's "expected to go through a long and complicated recovery process." Its outcome is far from certain. PHR-I will issue regular updates.

The Addameer Prisoner Support Group expressed these and others concerns. It said Adnan refused to stop fasting unless unconditionally released after his four-month administrative detention ended, dated from December 17, his arrest day, not January 8th ordered detention.

The agreed deal falls short. It states that if "secret material" unavailable to counsel "presents itself during the next two months, there would still be grounds" to renew his detention indefinitely.

This arrangement replicates many others. It permits indefinite detentions and re-arrests of those released. Numerous freed Palestinian prisoners, in exchange for Gilad Shalit, have been hounded, persecuted, and again arrested on spurious charges or none at all.

If Adnan's released as agreed, recovers, and returns to normal life, he's very much at risk for repeat treatment. Previously he was arrested and imprisoned eight times. His current detention is number nine. Will another be forthcoming when he's no longer a cause celebre out of sight and mind?

He was detained but uncharged. Israel's deal confirms no legitimate grounds for holding him in the first place. Like thousands of other Palestinians, it reflects decades of ruthless persecution.

Addameer called for his immediate release as well as hundreds of others administratively detained but uncharged.

It also expressed great concern for his health, saying he remains "in critical condition after over two months of hunger strike." Whether or not it continues, "he must receive proper arrangements for observing his health condition, which will likely now have irreversible consequences."

If he agrees to ingest food, "the potential complications from such a protracted hunger strike will require urgent and trusted care, which can only be provided if he is released."

Addameer, other human rights groups, and many others supported him from day one. They won't forget him now. His struggle for life and justice continues.

Ironically his scheduled April 17 release day falls on Palestinian Prisoners' Day. Established in 1976, it initially highlighted many thousands of unjustly imprisoned and brutally treated Palestinians. Annual commemorations continue until occupation ends and Palestinians again live free on their own land in their own country.

On February 22, Adnan's wife Randa explained how his persecution highlighted the plight of thousands of other Palestinian political prisoners. In a published statement, she said his struggle "transformed him into a global figure and a shining symbol of my people's struggle."

She'll never forget December 17 when Israeli forces stormed their home at 3AM. "The havoc they wreaked will always be etched on the minds of our two daughters, Ma'ali, age four, and Baysan, one-and-a-half years old. I would not be surprised if even our unborn baby will also be affected. Such was the trauma that accompanied that raid."

It's standard Israeli middle-of-the-night terror, even to arrest young children.

Randa called her husband a longstanding student activist. "He is no shadowy figure but an outspoken local leader against the Israeli occupation." His crime is wanting to live free. He abhors violence and was never charged with committing it.

During previous detentions, he used shorter-duration hunger strikes to resist. "What drives my husband to pursue this dangerous and difficult form of resistance," Randa asked?

"I have no doubt it is the unjust nature of 'administrative detention' and its notorious methods of torture and humiliation."

Free or detained, Adnan's driven to achieve liberation, justice, and public knowledge of decades of Israeli ruthlessness. His ordeal delivered a message that tyrannical inhumanity like this must end.

Randa knows Israel may try to renege on its agreement. It does often and can't be trusted. If Adnan's affected, she has "no doubt my husband would not hesitate to resume his stoic struggle with even more strength and determination."

"For me, the most difficult part of this ordeal (was knowing) at any time I could receive a phone call announcing that my husband is dead. But this is the price for our freedom. It is the indispensable sacrifice needed so that our children might enjoy a life of freedom and dignity."

Given that commitment, can others worldwide not stand supportively with him! Randa extended her family's "heartfelt thanks and appreciation" to everyone rallying in his behalf.

His struggle is ours. We're all Khader Adnan.

With images and comments, it goes from day one to resolution or death. It explains better than most words alone. Examine it and pass it on.

Defence for Children International-Palestine Section (DCI-Palestine) is a child rights organization and movement. Past reports discussed how young Palestinian children are tortured and otherwise ill-treated during arrests, interrogations, and detentions.

Since 2008 alone, it documented 38 cases of Palestinian children brutalized in solitary confinement, despite international law and repeated UN statements prohibiting it.

On January 12, it issued an urgent appeal for children then held. It listed them by first name/last initial only, their age, when arrested, prison location, and length so far in isolation.

It also explained terrorizing middle-of-the-night arrests and horrific treatment during interrogations and detentions.

All detainees are brutalized to extract confessions. Young children, of course, are most vulnerable. Nearly all face real or contrived stone-throwing charges. Guilt by accusation follow. So do detentions and often fines.

On February 18, DCI-Palestine complained to Israeli authorities on behalf of 16-year old Rasheed J. It requested an investigation of mistreatment in custody. On November 4, 2011, he was arrested and taken to Al Jalame interrogation center charged with stone throwing.

His ordeal included brutal arrest treatment, including tying his hands painfully behind his back, blindfolding, transporting him by military jeep, and forcing him on its floor for five hours.

He was then taken to Al Jalame inside Israel, hands and feet shackled. On arrival he was strip-searched, forced to sit on a low chair with his hands painfully cuffed behind his back, and interrogated.

Cell No. 36 followed. It was very small, had a smelly mattress, two concrete chairs, and "a toilet with a nasty smell." A sink was next to the toilet. He had artificial green light only. Cell walls were gray and rough with no windows, just gaps to let air in and out. Poor inadequate amounts of food came through a door slot.

He remained isolated for 13 days, 19 in all at Al Jalame. He was interrogated daily except Fridays and Saturdays. Each time he was tied to a small chair. He was asked about making home-grown grenades. After painful treatment, he confessed only to stone throwing.

After 19 days, he was transferred to Megiddo prison, inside Israel, in violation of Fourth Geneva's Article 76 prohibiting transfers of protected people outside their occupied territory.

On October 18, 2011, UN Special Rapporteur on Torture Juan Mendez called for ending solitary confinement, especially for children. It's brutalizing "torture or cruel, inhuman or degrading treatment or punishment when used as a punishment, during pretrial detention, indefinitely or for a prolonged period."

It especially harms children and anyone with mental disabilities.

Israel spurns all international law. Neither UN authorities or world leaders enforce policies with teeth to prevent it. As a result, Israel's gotten away with decades of crimes of war and against humanity with impunity.

Why else would detainees like Adnan resist. As he explains, his struggle is more than for himself. It's so all Palestinians can at last live free. Resistance won't end until what can't go on forever ends. It's just a matter of time.