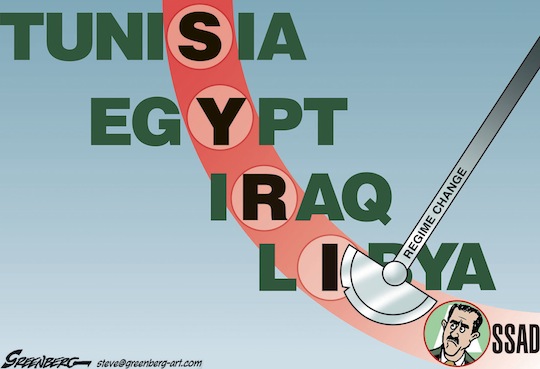 Spoiling for War on Syria

Iraqi fighters are massed to Syria's east, ready to join them. So are so-called Free Syrian Army insurgents north in Turkey. Perhaps escalated violence is planned for Sunday, February 26, when Syrians vote up or down on Assad's new draft constitution.

A mass supportive turnout would embarrass Washington, its allies, and insurgent leaders. Preventing it violently may be planned.

Syrian National Council and Free Syrian Army dissidents reject it out of hand. So does Washington. White House spokesman Jay Carney called it "laughable. It makes a mockery of the Syrian revolution. Promises of reforms have usually been followed by an increase in brutality and have never been delivered by the regime" since protests began.

Other US officials made similar disparaging remarks. Washington want protracted conflict to replace Assad with a pro-Western regime.

They ignore his repeated good faith reform announcements and thousands of released prisoners. At the same time, insurgent violence continues. He's blamed for confronting it responsibly. So would other leaders to restore order.

"Nothing in the present Charter shall impair the inherent right of individual or collective self-defense if an armed attack occurs against a Member of the United Nations, until the Security Council has taken measures necessary to maintain international peace and security. Measures taken by Members in the exercise of this right of self-defense shall be immediately reported to the Security Council and shall not in any way affect the authority and responsibility of the Security Council under the present Charter to take at any time such action as it deems necessary in order to maintain or restore international peace and security."

In addition, individual states may use defensive force against armed attacks until the Security Council acts. Other exceptions don't apply, including armed reprisals. Calling them unlawful, the General Assembly said all states must refrain from using them.

The right of self-defense is limited solely to deterring armed attacks, preventing future ones after initial assaults, or reversing the consequences of enemy aggression, such as heavily armed Western-backed Syrian insurgents.

Not only does international law support Assad, he's obligated to defend his people under armed attack.

However, force must conform to the principles of necessity, distinction, and proportionality.

Distinction pertains to distinguishing between civilian and military ones.

If these objective aren't possible, attacks are prohibited, but not when civilian lives are threatened by hostile elements doing most of the killing.

In addition, to a limited degree, anticipatory self-defense is permitted when compelling evidence shows likely imminent threats or further attacks after initial ones.

However, attackers bear burden of proof. For nearly a year, Syria faced Western-backed violence. Confronting it's essential to restore order.

In contrast, under no circumstances, with no exceptions may one nation, NATO, or other combination of nations intervene against another without Security Council authorization. Doing so is illegal aggression, a lawless act of war.

"Nothing contained in the present charter shall authorize the United Nations to intervene in matters which are essentially within the domestic jurisdiction of any state or shall require the Members to submit matters to settlement under the present Charter; but this principle shall not prejudice the application of enforcement measures under Chapter VII," pertaining to threats to peace, its breaches, or acts of aggression.

Western-backed aggression rages in Syria. Likely escalation's planned. Under UN Charter provisions, the Security Council's obligated to confront it, not Assad. He and nonviolent Syrians are victims, not villains.

Doing so ignores Chapter VII authorization to impose boycotts, embargoes, blockades, and severed diplomatic ties when justified - never war, except in self-defense and only until the Security Council acts.

Paragraph 139 delegates UN responsibility "to use appropriate diplomatic, humanitarian and other peaceful means, in accordance with Chapters VI and VIII of the Charter, to help protect populations from" these crimes.

Syria's now up for grabs. Will it remain independent or be ravaged like Afghanistan, Iraq and Libya and become another exploited Western colony?

"They will, from somewhere, somehow, find the means to defend themselves, as well as begin offensive measures."

Directly or indirectly, America's arming insurgent forces. Former US diplomat Walid Maalouf said Washington's "secretly providing aid to (Syria's) opposition." For years, US weapons and munitions flooded the region and still do. America's directly involved in cross-border smuggling, including from Incirlik Air Base in southern Turkey near Syria's border.

Fifty Turkish officers were arrested in Syria. They were secretly organizing opposition forces. They admitted being trained by Israeli Special Forces to help destabilize Assad's government. Others may also be caught in the act. Reports suggest Saudi Arabia and Qatar are paying anti-Gaddafi insurgents $1,000 monthly to fight Assad.

"Despite public denials, military preparations for intervention (against Syria) are quietly afoot...."

Obama's poised to act, according to DEBKA's Washington sources. Allied countries await "a White House decision before going forward." Defying Security Council authority, perhaps acting on behalf of "Friends of Syria" is planned. With these type "friends," who needs enemies. They replicate "Friend of Libya" responsible for NATO intervention.

London's Telegraph reported on US/EU/Arab League/allied nations "Friends of Syria" meeting in Tunis. According to an "updated draft declaration," they demand all civilian area violence immediately stop, and that humanitarian supplies be allowed to enter.

In fact, along with Free Syrian Army insurgents, they're slaughtering civilians and state security forces. They reject peaceful resolution in contrast to internal Assad opponents who demand it. As a result, they're entirely shut out for opposing Western plans.

The draft also pledged to "increase its engagement with and practical support for the Syrian opposition" without elaborating further.

The current draft's a work in progress. Its final text may change, but not its message. It demands regime change, so far barely stopping short of declaring war.

"Governments around the world have the responsibility to act....and to redouble our efforts to stop the Assad regime's despicable campaign of terror."

He also barely stopped short of declaring war. Increasingly, it looks likely, and if so, expect a bloodbath like Libya.

It also claimed "credible and consistent evidence" of Syrian forces shooting "unarmed protesters," killing soldiers refusing to obey orders, and "arrest(ing) persons without cause," mistreating them, and "attack(ing) civilian neighborhoods with indiscriminate tanks and machine-gun fire."

Evidence it claimed came from people with "inside knowledge." It's similar to falsified Gaddafi crimes, including using rape as a weapon of war and massacring civilians to justify intervention.

Insurgents were also accused of similar abuses, but not "comparable in scale and organization to those carried out by the state."

"to save succeeding generations from the scourge of war to reaffirm faith in fundamental human rights; to establish conditions (promoting) justice....equal rights of men and women (in all nations)....(respect for) international law....promote social progress....to ensure....armed force shall not be used" and much more.

Both entered illegally. Media reports praise them. Assad's unjustifiably blamed for their death.

With Western aggression likely, the wild card is will Russia and China intervene. Both countries reject foreign interference. They call for peaceful conflict resolution. Instead, it's escalating toward all-out war.

Each nation has vital regional interests. Will they remain spectators if diplomacy fails? Much hinges on their plans.