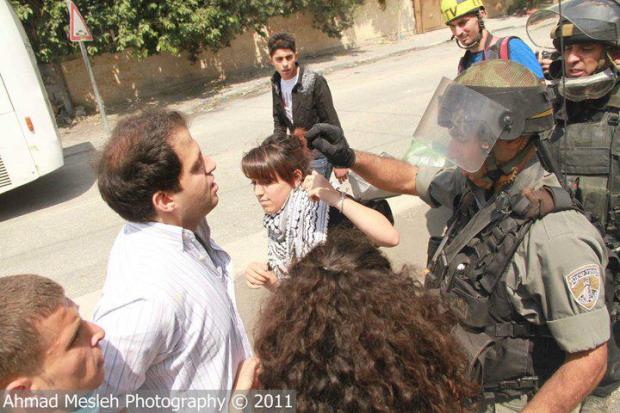 Youths Against Settlements organized it. They're "a national Palestinian non-partisan group" against colonization, including settlements, "through nonviolent popular struggle and civil disobedience." They demanded Shuhada Street be reopened. More on its closure below.

As they approached the street, soldiers attacked them violently with tear gas, sound bombs, and rubber bullets. Ten were arrested, including a Palestinian journalist and Quran. In the process, he was assaulted, beaten, and detained for allegedly pushing an Israeli soldier.

In fact, his offense was peacefully protesting Israeli policy with others. In response, soldiers attacked him with pepper spray, smashed his face against a jeep metal bar, and arrested him with other nonviolent participants.

They were protesting closure of Hebron's Shuhada Street. It's a main thoroughfare Palestinians have been forbidden to use for many years. It links north and south city areas. It also passes by major markets, the Old City, the Tomb of the Patriarchs, and Israeli settlements.

In 1994, restrictions began. Access was alternately allowed, then denied. Since October 2000, Palestinians were entirely prohibited from walking or driving on Shuhada and adjacent streets.

Doing so caused center city economic collapse. Over 300 shops and other commercial facilities closed. Israel turned Hebron's central bus station into an army base. Area properties, including homes, were closed by army order. Many residents left. A ghost town remained.

Settlers can use the street freely. They also harass Palestinians with impunity. Closing Shuhada Street reflects longstanding Israeli policy to make life so unbearable residents will give up and leave Occupied Palestine.

Some do, but most resist courageously and won't quit. It's their country, their land, and they're struggling to regain it and end decades of abusive occupation.

Quran and other activists support them. He's a Palestinian American, a US citizen/Stanford University graduate, class of 2010. He's now in Al-Maskubiyeh Prison. It's notorious for conducting abusive interrogations. Torture's freely used. US officials in Israel were told. Whether or not they'll help isn't known.

On February 27, his trial began. In military tribunals, guilt by accusation is policy. Secret evidence was presented unavailable to defense attorneys. It's standard Israeli practice when none exists. Justice is systematically denied. Expect Quran to fare no better.

His family was denied contact. His lawyer barely saw him. Whether or not charged, he faces potential months or years in prison.

Quran represents "the face of the new Middle East." A Palestinian American, he returned home to begin an alternative energy company and "help create a Palestinian state."

At Stanford, he was president of Stanford Students for Palestinian Equal Rights (SPER). He's also part of Palestine's March 15 movement. A new generation of Palestinian youths, they demand unity against occupation and repression. Social networks in Arabic and English are used. They call for liberating protests.

Without leaders or names, most activists prefer anonymity to prevent arrest and abuse. Its mission statement says:

"We call on all the Palestinian factions to unite under the banner of Palestine, in order to reform the political system....based on the interests and aspirations of the Palestinian people in the homeland and the diaspora."

Thousands support them, even though one member says:

"We live in constant fear that we're being followed, that they know who we are, that we are letting slip our identities."

"We're doing this because we want to have a future here. And tell our (children) that we did something for the future of our country."

On February 27, Stanford students organized a campaign for his release. A petition drive's included. It states:

"Fadi should not be detained for an indefinite period of time on false charges. It is imperative that the Israeli government release (him) so that he may continue to speak for his people and PEACEFULLY push for basic human rights."

On its first day, over 1,000 supporters signed it. They urge others join them for justice.

After hunger striking for 66 days, Khader Adnan struggles to survive and regain health. Physicians for Human Rights-Israel (PHR-I) said he's "expected to go through a long and complicated recovery process."

It included severe intestinal blockage pain. On February 28, he underwent abdominal surgery at Safed's Ziv Hospital to relieve it. Reports called his condition stable, but given his weakened state, recovery's far from certain.

On February 28, the Addameer Prisoner support group said the following:

"Last night, 27 February 2012, Khader Adnan went through surgery at Ziv Hospital, due to problems in his digestive system. PHR-Israel's volunteer doctor reached the hospital immediately to speak to Khader and his doctors before the operation."

They "reported to us today that the operation went well and that Khader's condition is currently stable." He's now in the hospital's surgical wing. During transfer to Ziv Hospital, both arms and legs were again painfully shackled despite no ability to walk.

Doing so contradicted Israel's February 23 District Court ruling. It constitutes cruel and inhumane treatment, even toward a man close to death.

Adnan's abuse reveals Israeli state terror. Palestinians endure it daily. Their liberating struggle continues. Activists like Quran and many others are committed to help.

Breaking: After Thousands-Strong #FreeFadi Campaign, Fadi Quran to Be Released From Israeli Prison