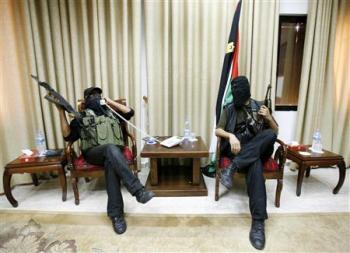 Hamas in Fatah office
Prospects for May Palestinian Elections

Once concluded, elected officials will join the PLO as sole legitimate Palestinian representative. Agreement was reached on raising PLC members from 132 to 150, approving a new PNC, and parliament in exile with 350 members.

They'll include 150 from Palestine, and another 200 diaspora ones to be elected in countries where they reside or be agreed on in nations not allowing elections.

"Hamas says a trend within the movement is reluctant about Abbas heading the new government for constitutional rather than political reasons."

It's a major obstacle, he added saying:

"Hamas does not think elections can be held currently because the atmosphere isn't appropriate (to do so). They consider (them) a means to rotate authority, but not to turn the table against Hamas."

In late February, the Al-Zaytouna Centre for Studies & Consultations assessed electoral prospects and implications. It said "conditions on the ground do not seem to provide a supportive environment."

Fatah wants its legitimacy established to lead all Palestinians and deal politically with Israel. Consider its record under Abbas.

In the West Bank, nothing tangible was achieved. Organizational and structural problems remain. Hamas controls Gaza and has some West Bank influence.

If held, West Bank, Gaza, and diaspora Palestinians will vote. The PLO and its institutions will be restructured. Many Fatah leaders object "because it will break up the movement's monopoly of the PLO and open the door for a stronger role by Hamas and the resistance factions."

Up to now, Fatah leaders rejected Hamas power sharing, including extending it to the PLO. As a result, they'll try to restrict elections to PA regions and "disable" PLO ones. Hamas and other Palestinian factions won't agree.

Hamas wants elections to be able to participate politically and lead. Palestinians support their resistance, unlike Abbas serving as a collaborationist Israeli ally.

"Hamas still enjoys wide popular support at home and abroad in addition to organizational cohesion and strong institutional structure as compared to Fatah."

It also controls Gaza, its institutions and apparatuses. Moreover, it insists on the following electoral conditions:

(2) Ensuring fair elections throughout the Territories.

(3) Conducting presidential, legislative, and PNC elections at home and abroad so all factions can participate equitably and become part of the Executive Committee leadership.

Israel's very much at odds. It wants Hamas and other resistance groups marginalized and shut out, unity prevented, and leaders it controls.

As a result, Israeli extremists won't let free and fair elections disrupt their plans. Their pretext may be "to prevent (resistance faction) attempts (to rebuild) their military infrastructure."

As long as occupation harshness continues, Israel will thwart Palestinian sovereignty attempts, including through free and fair democratic elections.

Given instability, unresolved Hamas/Fatah differences, and hardline Israeli policy, elections may either not be held or if conducted will continue status quo subjugation.

As a result, elections may be postponed. Washington prefers illegitimate ones like under Egypt's military junta and Yemen's with one candidate representing the regime protesters want ousted.

In addition, Hamas/Fatah differences may prove irreconcilable, and Israeli intransigence is more hardline than ever.

It wants no 2006 repeat, and may assure it through elections only despots would love. In other words, it's comfortable with puppet officials at the expense of legitimate ones representing long denied Palestinian rights.

As a result, their liberating struggle continues with no resolution yet in sight.