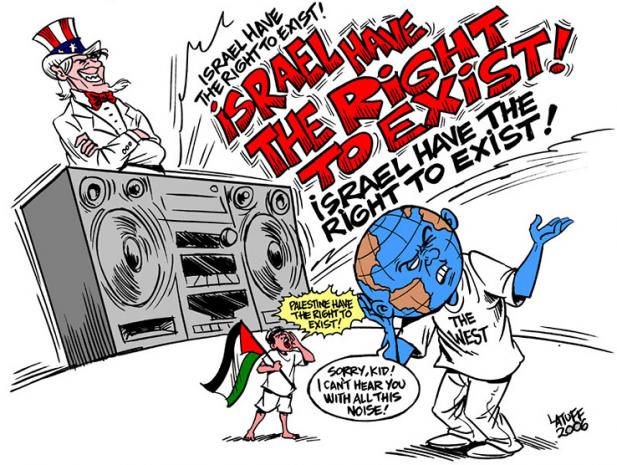 Born in blood, Israel's been drenched in it since. Its agenda reflects racist state terror ruthlessness.

"To me the behavior of Israel and the uncritical support it gets from western governments is like" a destructive force harming bodily organs.

Its sound resonates "24 hours a day and poisons the whole world with its malignance." Palestinians bear the burden, besieged Gazans and thousands of political prisoners most of all. More below.

"Let's make 2012 the year that injustice ends," says Sayle. The world can't wait nor should it. Injustice to anyone harms everyone.

For Palestinians, it's a way of life. Daily oppression terrorizes them. The Palestinian Center for Human Rights (PCHR) publishes weekly reports documenting it.

Its latest March 1 one said dozens of Israeli security forces "attempt(ed to storm) the al-Aqsa Mosque in Jerusalem while Palestinian worshippers were inside" praying.

Thousands of political prisoners reflect them. Many resist heroically. Hunger striking is their weapon of choice. Khader Adnan preferred death to unjust detention. Hana Shalabi joined his struggle for justice.

On March 2, she expressed determination to refuse food to highlight Israeli injustice against all Palestinian prisoners, especially those held uncharged under administrative detention.

On March 1, Palestinian Prisoner Society (PPS) lawyer Fawwaz Ash-Shalloudy visited her. She explained her horrific ordeal, including extreme prison harshness to break her spirit and force her to ingest food.

She refuses. She's determined to persist. She wants her message delivered and heard. Her health's deteriorating as a result. Justice takes precedence.

On March 3, she extended greetings ahead of International Women's Day. On March 8, it's commemorated annually. Observed for over a century, global gender equality and peace advocacy rallies are held. They also stress ending violence and injustice against women and girls everywhere.

She'll persist until freed, adding Israel has "gone too far in humiliating and enslaving Palestinians in addition to practicing various types of insults and torture."

Released in last year's Shalit prisoner swap, she said re-arresting her reflects revenge and Israel's "racist policy that knows no mercy." She called allegations against her fabrications. She also saluted Palestinian women ahead of International Women's Day, saying they'll "always be the spearhead of resistance against the occupiers."

Since 1948, they've been denied basic human rights, security, free expression, movement, a safe and healthy environment, and education. They became refugees in their own land and abroad. They bear burdens beyond what most women can bear.

They struggle daily to endure, survive, and be spouses, mothers, caregivers, fighters, nurses, workers, and teachers.

One mother spoke for others, saying she "sleeps with her eyes wide open, and lives with her heart broken, expecting grief to be renewed at any moment." Few in Western societies can imagine what they and all Palestinians endure daily.

Khader Adnan and Hana reflect their spirit, no matter the personal cost.

On March 3, the Israeli Prison Administration prevented a medical team from visiting Hana. It includes Palestinians and international healthcare professionals.

They said they wanted to see her after Israeli authorities refused to have her examined or hospitalized if her deteriorated health worsens. Her father Yahya said she's lost considerable weight, is weak, and can barely stand.

The team holds Israel directly responsible for her welfare. It urged ICRC medical specialists to examine her.

He refuted allegations about planned "attacks against military targets." Prosecutors claim secret evidence shows it. "Secret evidence" is code language for none whatever. Verifiable evidence is freely presented. Thousands of Palestinians language in Israel's gulag based on nothing but baseless allegations. Though innocent, they endure horrific unjust treatment.

On March 2, after Friday prayers, dozens of Palestinians marched in solidarity with Hana, Khader Adnan, and other Palestinian prisoners. Near Hana's Borqeen village, they held Palestinian flags, placards, and banners calling for their release.

Their march ended at Hana's home. Her elderly parents began hunger striking in solidarity. They're doing it publicly in a protest tent. Her father Yahya said they'll continue until she's freed. National/Islamic Factions representative Rajeh Qablawi said her example and "determination exposes the true and cruel face of the Israeli occupation, aggression and injustice."

The Al Mezan Center for Human Rights condemned Hana's detention. They hold indifferent world leaders responsible for what happens. They called for international solidarity campaigns to free her.

They paid "tribute to Palestinian prisoners' struggle against injustice and violation of human rights, and for freedom and dignity." They condemned Israel's abusive treatment. They said her case and others like it reflect  Israel's denial of fundamental human rights.

They also expressed concern for Hana's life, safety and well-being. They urged international pressure to highlight what thousands of Palestinian prisoners endure. Hana's struggling against decades of Israeli injustice throughout Occupied Palestine. Her struggle is ours. We're all Hana Shalabi.

"Palestinian human rights defender (Tamimi) is a prisoner of conscience, detained solely for his role in organizing peaceful protests against the encroachment onto Palestinian lands by Israeli settlers, and should be released immediately and unconditionally."

On March 24, 2011, he was lawlessly arrested and charged with "incitement and support of a hostile organization, organizing and participating in unauthorized processions, incitement to throwing objects against a person or property," and other alleged offenses.

Currently in Ofer prison, his trial continues. He repeatedly affirms nonviolent principles in resisting repression. On November 16, 2011 in court, he said:

"International law guarantees the right of occupied people to resist Occupation. In practicing my right, I have called for and organized peaceful popular demonstrations against the Occupation, settler attacks and the theft of more than half of the land of my village… I organized these peaceful demonstrations in order to defend our land and our people…."

"The military prosecutor accuses me of inciting the protesters to throw stones at the soldiers. This is not true. What incites protesters to throw stones is the sound of bullets, the Occupation's bulldozers as they destroy the land, the smell of teargas and the smoke coming from burnt houses. I did not incite anyone to throw stones, but I am not responsible for the security of your soldiers who invade my village and attack my people with all the weapons of death and the equipment of terror."

On December 10, 2011, Mustafa Tamimi died from a high-velocity tear gas grenade fired directly at his head at close range. It was deliberate, cold-blooded murder.

"International law gives us the right to peaceful protest, to demonstrate our refusal of the policies that hurt us, our daily life and the future of our children… I do not know and do not care if they [the settlements] are permitted by your law, as it was enacted by an authority I do not recognize…True justice would not have me stand here before this court at all, let alone while I am imprisoned and shackled. This case is baseless and made up with the sole goal of putting me behind bars."

In 1993, AI documented his torture in detention. As a result, he suffered a subdural hematoma and lay unconscious for six days during which he underwent life-saving surgery.

On December 6, 1993, he was released uncharged. His ordeal now continues. Support him, Hana, Khader, and thousands of others like them. Demand appalling Israeli injustice end and those responsible held accountable.