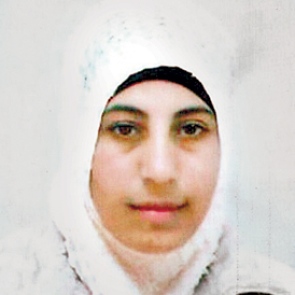 The Palestinian Prisoners Ministry said she's exhausted, pale, and hardly able to speak, but won't succumb to injustice. She wants administrative detentions ended, and those arrested no longer subjected to brutal and humiliating treatment.

She's losing weight and can hardly stand. Her health's deteriorating. No matter. She won't compromise her rights or dignity. She'll persist until freed.

Israel reduced her detention from six months to four. She responded saying she's committed to continue. Lawyer Fadi Qawasmi asked Ofer military court to let him call witnesses on her behalf. He wants those involved in her arrest and torture interrogated. The court refused. Its mandate excludes justice.

Allegations against Shalabi and thousands of other Palestinian prisoners are spurious. She's hunger striking for them and herself. Human rights groups condemn Israel's oppression. Shalabi's struggle highlights its gravity.

Israeli authorities so far ignored her lawyer's request to hospitalize her for vital treatment. They don't care if she lives or dies. They only respond when world attention exposes their injustice. Even then, they yield little.

AI said she's "increasingly weak but in good spirits." Throughout most of her ordeal, she's been isolated in solitary confinement. Her condition increases its harshness. Her parents have been denied permission to see her.

She's not charged with any crimes because she committed none. According to her lawyer, Israeli military authorities allege she's involved in activities threatening Israel's security, but nothing's presented to prove it.

Secret evidence alone exists. Israel won't reveal it for security reasons. In fact, it's because it's fabricated. Without access, Hana's lawyers can't contest. They can only guess. Either way they face a process rigged to convict or its equivalent in cases of uncharged administrative detentions. They violate the letter and spirit of international law.

Article 9 of the International Covenant on Civil and Political Rights (ICCPR) affirms the following:

"1. Everyone has the right to liberty and security of person. No one shall be subjected to arbitrary arrest or detention. No one shall be deprived of his liberty except on such grounds and in accordance with such procedure as are established by law.

3. Anyone arrested or detained on a criminal charge shall be brought promptly before a judge or other officer authorized by law to exercise judicial power and shall be entitled to trial within a reasonable time or to release. It shall not be the general rule that persons awaiting trial shall be detained in custody, but release may be subject to guarantees to appear for trial, at any other stage of the judicial proceedings, and, should occasion arise, for execution of the judgement.

4. Anyone who is deprived of his liberty by arrest or detention shall be entitled to take proceedings before a court, in order that that court may decide without delay on the lawfulness of his detention and order his release if the detention is not lawful.

5. Anyone who has been the victim of unlawful arrest or detention shall have an enforceable right to compensation."

It also "call(s) for an end to the practice of administrative detention. All administrative detainees held on account of their non-violent political opinions or activities should be released immediately and unconditionally, and others should be released unless they are to be charged with an internationally recognizable criminal offence and promptly tried in accordance with internationally accepted standards for fair trial."

AI called on Israeli authorities to give Hana immediate access to adequate medical care, ensure she's treated humanely at all times, and not punished for hunger striking.

In addition, it wants her immediately released or lawfully charged, and granted regular access to lawyers, doctors, and family.

It urged Hana's supporters to petition relevant Israeli authorities on her behalf. They include:

Two weeks ago, Suheil Akram Al-Masri hunger struck in solidarity with Hana. It took its toll. On March 4, he was hospitalized after fainting. Nonetheless, he vowed to continue until she's freed.

Resistance is their only weapon. Hopefully, using it will attract widespread attention. The more the world watches, the less able Israel's oppression can continue. So far, all Palestine's affected, especially those wrongfully imprisoned and Gazans under siege.

Liberating struggles don't succeed easily. Sustaining them has the best chance. Palestinians have done it for decades. Heroic hunger strikers highlight what it's all about. Their struggle is ours.

According to financial expert Martin Weiss, their only disagreement is when, not whether to attack Iran. "So what's next," he asked, saying:

"We now have confirmation from multiple sources that, with or without US approval, Israel is planning a military strike on Iran's nuclear facilities within the next few months."

On March 4, Obama's AIPAC speech reiterated fealty to Israel's security. It's "non-negotiable," he said. He vowed to help Israel defend against any threat. He said no Israeli government will tolerate Iran having nuclear weapons. Nor will Washington. He promised never to let it happen, despite knowing Tehran's program is non-military.

"I have said that when it comes to preventing Iran from obtaining a nuclear weapon, I will take no options off the table, and I mean what I say. That includes all elements of American power, (including) a military effort...."

At what point will war replace threats? Will Americans and others react to prevent it?

Only mass outrage has a chance. It's high time it challenged two out-of-control rogue regimes. Their lawlessness endangers humanity. Their agenda's too outrageous to tolerate.

The stakes are either peace in our time or perish. The equation's literally that stark. So are the consequences.