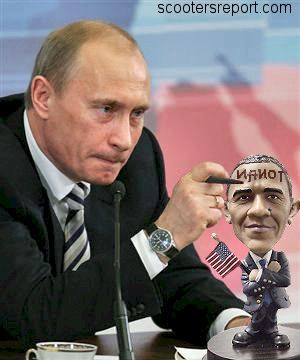 With nearly all votes counted, official results were as follows:

Opponents allege fraud. So do major media scoundrels. At issue isn't who won or lost. Nor is it about a fair or fraudulent process. America's electoral system is hopelessly corrupted and broken, yet media giants praise it.

They also cheerlead America's imperial agenda. As a result, they reject Putin's opposition along with China, Venezuela, Cuba, Iran, perhaps Brazil and India, and others fed up with what harms their interests.

Putin's especially outspoken. He accused America of living beyond its means "like a parasite" harming the global economy. He also called dollar dominance a threat to financial markets. If America's in "systemic malfunction" it affects everyone, he added.

"The use of force abroad, according to existing international laws, can only be sanctioned by the United Nations. This is the international law. Everything that is done without the UN Security Council's sanction cannot be recognised as fair or justified."

"I am being as restrained as I can be when I choose these words," he added. "There were no international terrorists under Hussein," nor WMDs.

In 2007, he condemned Washington's quest for unipolar global dominance "through a system which has nothing to do with democracy." He added that Western powers are keen to teach Russia about it, but don't practice it themselves.

He said post-Cold War armed conflicts and casualties exceeded prior eras. He added that we're "witnessing an almost uncontained hyper-use of military force in international relations."

America spurns international norms and principles. It initiated a reckless arms race. It "overstepped its national borders in almost all spheres." As a result, no one's secure.

"The Security Council resolution is deficient and flawed. It allows everything, and is reminiscent of a medieval call for a crusade. It effectively allows intervention in a sovereign state."

It's becoming a "trend," he added. "Now it's Libya's turn - under the pretext of protecting civilians. Where is the logic and conscience? There is neither. The ongoing events in Libya confirm that Russia is right to strengthen her defense capabilities."

Independent (CEC-invited) international monitors checked voting in over 30 Russian regions. They concluded the process was calm and orderly. Polish monitor Mateus Piskorski said, "All complaints are about technical issues and not about violations of election law."

Thousands of Russian and foreign observers monitored polling stations throughout the voting process. Moreover, an elaborate Webcam system let anyone do it online. In fact, election officials said over two million people registered online to monitor voting live as it occurred.

International monitors said it "exceeded everything they saw in their home countries - or anywhere else in the world."

They also agreed that "elections were held in a normal mode and without serious violations." In addition, they praised the Webcam system. Italian independent observer Allesandro Mussolini said:

"Judging by the results of our visits to the polling stations, we can make a statement that the Russian video monitoring system exceeds all international standards. It is wonderful that this complicated election mechanism is working,"

"Everything was, well, transparent and open. Russia has opened a new page in history today – there is a broadcast of the Russian elections all over the world."

Others made similar comments. Serbia's Tomislav Nikolich called it a "full level of democracy," what his country's elections lack.

At 5:30PM Moscow time (17.5 hours after polls opened in Russia's Far East), 86 complaints were received. In total after voting ended, 460 were registered. According to CEC's deputy chairman Stanislav Vavilov:

They support pro-Western and/or regime change initiatives in over 90 countries. They operate like CIA alter egos, more openly than covertly by funding opposition groups. In Russia, they're actively anti-Putin.

Claiming it's a "private, nonprofit foundation dedicated to the growth and strengthening of democratic institutions around the world" masks NED's true agenda. It actively participated in US orchestrated "color revolutions" in Georgia, Ukraine, and elsewhere. It also manipulated so-called "Arab Spring" rebellions to create illusions of change.

"We have won in an open and fair struggle....This was more than just a presidential election. This was a very important test for us – a test for the political maturity of our people and independence. We have demonstrated that nobody can impose anything on us."

"We have shown that our people are capable of telling the difference between the desire for novelty and progress, and political provocations that press for only one goal: to destroy Russia. Today our people have proven that such scenarios are not going to work in our country."

"Tens of thousands of people from both camps are expected to gather in central Moscow on Monday. Moscow's population has become visibly more politicized in the run-up to" Sunday's election.

Opposition figures Garry Kasparov and blogger/lawyer Alexei Navalny may also attend. Navalny, in fact, showed up, wouldn't leave with a few dozen others until their demands are met, and got arrested. Both have Western ties. Kasparov's a board member of the neocon National Security Advisory Council of Center for Security Policy. It's a "non-profit, non-partisan national security organization that specializes in identifying policies, actions, and resource needs that are vital to American security."

He's also connected to Khodoroksky's partner Leonid Nevzlin. He's avoiding prosecution in Israel on murder-related charges. Navalny has NED ties. His LiveJournal blog admits receiving funding. They and others are well paid to oppose Putin and pro-Western policies. As a result, their fraud claims ring hollow.

"Evidence of brazen violations during parliamentary elections in December helped catalyze a series of unusual anti-government protests, and activists on Sunday circulated evidence - much of it by video clips - that they said established a comparable level of foul play in the presidential election."

Another involved three Ukrainian women posing as reporters. As they approached ballot boxes in one polling station, they stripped to the waist, revealing the slogan "I steal for Putin" on their chests.

Over 45 million Russians voted, around 5% by absentee ballot. Fair or fraudulent, they had no effect on results. Yet opposition figures claim it as their main argument.

Yet other media scoundrels headline it, including the Washington Post, Wall Street Journal, London Guardian, London Independent, other major broadsheets, the BBC, and US broadcast and cable channels.

Whatever irregularities occurred were minor. Polls showed Putin heavily favored to win. He did slightly better than expected.

As a result, Washington, its rogue NATO partners, and complicit media scoundrels have Putin to kick around for the next six years. Expect them to take full advantage.

Putin's outspokenness won't stop. He'll continue saying "nobody can impose anything on us" and opposing Western efforts "to destroy Russia. Today our people have proven that such scenarios are not going to work in our country."

As president, his job is to assure they don't. It's also to serve all Russians responsibly. Hopefully, he's up to the task.