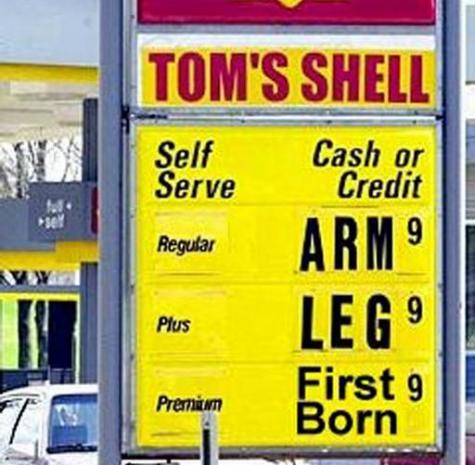 Gasoline consumption in the United States has been dropping for years. In the last decade, vehicle fuel efficiency has improved by 20%, and the combination of that shift and a weak economy of late has pushed gasoline demand to its lowest level in a decade.

At the same time, US oil production is at its highest level in a decade. Deepwater wells in the Gulf of Mexico and horizontal fracs in the Bakken shale have turned America's domestic oil production scene around. After 20 years of declining production, US crude output rates started to climb in 2008 and have increased every year since.

With production up and demand down, the basics of supply and demand indicate that oil prices should be falling. Americans should be paying less at the pump.

Instead, the average US price at the pump reached US$3.80 per gallon on March 5, after 27 consecutive days of gains. That's 26.7¢ above the old record for March 5, set last year. The price of gasoline has climbed 32¢ or 9.3% since February 1; analysts expect prices to continue rising, reaching a national average of something like US$4.25 per gallon.

What gives? Is it all about Iran? Are speculators manipulating the market? Do any politicians have good ideas on how to "fix" the high cost of gasoline? And is there relief on the horizon?

What gives is a combination of forces. Rising tensions in the Middle East are part of the problem, but so are deficiencies in North America's oil infrastructure that are causing price discrepancies across the nation. Some of the refineries being forced to pay premium prices for oil are shutting down, and that limits gasoline supplies in parts of the country. Speculation is also a factor, as it is an ingrained part of the market, but it is not the driving force behind America's fuel-price problems.

If you're wondering, there aren't any politicians with novel, sound ideas on how to reduce fuel prices. Newt Gingrich's promise to bring prices below $2.50 a gallon is as attainable as Michelle Bachmann's plucked-out-of-the-air promise of $2 gasoline.

Thankfully though, there is some relief on the horizon. First, we'll tackle the issues. Then we'll outline some developments that should ease the pain.

Two main forces are driving fuel prices upward in the United States: high global oil prices and the state of the US oil transportation and refining industry.

High oil prices are the more obvious part of the problem and are certainly the part that attracts the most attention. Tensions in the Middle East have been elevated since Tunisia's revolution kick-started the Arab Spring in January 2011. Subsequent revolutions in Egypt and Libya as well as the oftentimes violent suppression of dissent in Bahrain, Jordan, and now Syria have kept questions about the stability of supplies from the oil-important Middle East front and center all year.

Now, of course, it's Iran that is keeping oil traders up at night. Between oil embargoes against the country and threats from Iran to block the Strait of Hormuz (a maritime passageway vital to the oil industry), the growing rift between Iran and the Western world is threatening supplies from the world's fourth-largest producer. That's a surefire way to push oil prices skyward.

The result: Brent North Sea (the pricing benchmark for crude oil traded in Europe) climbed above US$100 per barrel a year ago and hasn't looked back. Since last February Brent crude has traded above US$110 per barrel more often than not, and has regularly topped US$120 per barrel.

The Middle East's ongoing tensions also lifted crude prices in North America: After sitting comfortably near US$80 per barrel for most of 2010, the price for West Texas Intermediate (WTI) rose above US$100 several times during 2011 and averaged close to US$90. Yes, it moved much less than did Brent; moreover, not all crude oils in North America had similar boosts. To understand that situation, we have to delve into America's oil transportation and refining system.

The US is divided into five oil districts, which were originally designed to ensure energy security during World War II. Things have certainly evolved since then, but the districts remain less connected than you might think. Crude oil cannot necessarily flow from one side of the country to the other or from one producing region to another refining area. The system's disconnectedness means that refiners in different regions are forced to pay whatever the price may be for the crude oil they can access – and those prices differ significantly.

East-Coast refiners have traditionally relied on imported oil from Europe and West Africa, which means they pay Brent pricing for most of their crude. As such, Brent's surging price has dealt a blow to East-Coast refiners, hitting several so hard that they are shutting down. No fewer than four refineries serving the East Coast are going or have gone offline since 2010, eliminating almost half of the gasoline previously supplied to the US Northeast. Knowing that, high gasoline prices in the Northeast start to make a bit more sense: Refiners' costs have been sky high, and refinery shutdowns have eliminated a huge chunk of supply.

Similarly, refiners on the West Coast receive some supply from Alaska but depend on internationally priced crude for the bulk of their input. Their need to pay Brent pricing explains why gas prices in California are regularly among the highest in the nation.

At the other end of the spectrum are refiners in the Midwest. The oil hub at Cushing, Oklahoma, is being increasingly inundated with crude oil as production ramps up in North Dakota's Bakken formation and in Canada's oil sands. Crude from both of those rapidly-expanding oil regions flows primarily to Cushing, where refineries process as much as they can. Those refiners are able to buy at WTI pricing, which has held a roughly 20% discount to Brent crude for the last year. That helps keep gasoline prices in the Midwest a little lower.

However, Midwest refineries are generally designed to process light, sweet oil, which means they can handle output from the Bakken but are not up to processing heavy oil from the sands. Oil-sands crude needs to go to the Gulf Coast, where an army of sophisticated refineries are thirsty for heavy oil. All that is lacking is a pipeline to connect supply with demand, but at the moment there is no such pipe; thus, the supply glut at Cushing has discounted heavy oil significantly. Western Canada Select, the benchmark crude oil coming out of Canada's oil sands, closed at US$74.73 per barrel on March 5, a 30% discount to WTI and a 40% discount to Brent.

There is cheap oil available in the United States. You just have to be able to transport the crude from Cushing to your personal refinery to take advantage of it.

One final element is making matters worse: Refineries are currently starting to shift to producing spring-summer gasoline blends, which are lighter and therefore usually cost about 10¢ more per gallon than fall-winter blends. And this year, the quick refinery shutdowns needed to enact the seasonal shift are creating slight supply gaps because some of the "swing" refineries that usually help bridge the gap are no longer operating. For example, the Hovensa refinery in the US Virgin Islands – a joint venture between Hess Corp. (NYSE.HES) and Petroleos de Venezuela – used to produce extra volume during the seasonal transition, but it was closed down a few weeks ago after losing $1.3 billion over the last three years.

Lights on the Horizon

Both sides of the problem – high oil prices and insufficiencies in America's oil infrastructure – will develop over the next 12 months. On the infrastructure side, we can be pretty certain that the developments will be positive. One pipeline that for years has carried oil north from the Gulf to Cushing is being reversed, which will start to ease the heavy-oil glut within weeks. TransCanada recently announced that it is seeking expedited approval to start construction of the southern leg of its Keystone XL pipeline, which will also connect Cushing to the Gulf Coast. Since there is nothing controversial about the southern portion of the project it should be approved quickly, in which case TransCanada hopes to have the pipeline built and operational by the middle of next year.

These pipelines will enable America's army of Gulf Coast oil refineries to purchase North American crude oil. When that happens, Western Canada Select will not maintain its current 40% discount to Brent, but it will almost certainly remain cheaper than its European counterpart, creating cost savings for US refiners that they will pass on to consumers.

As for high oil prices in general, the biggest question there is Iran. If Iran blockades the Strait of Hormuz, oil prices will shoot up. If Israel or the US sends in air strikes against Iran's nuclear facilities, the same thing will happen. The average price of gas in the United States would likely top US$5 per gallon. However, if war can be avoided, the price of oil should start to recede as fears abate; if oil sanctions against Iran stay in place, Saudi Arabia should be able to step up production enough to replace the lost volumes. Under this scenario the price of a barrel of Brent oil could fall below $100.

The level of warmongering from all sides seems to change on a daily basis, so we are not prepared to make any predictions about whether an attack on Iran is imminent. However, there are ways savvy energy investors can profit from this uncertain situation as well as other shifting trends. Get our free 2012 Energy Forecast to get started today.