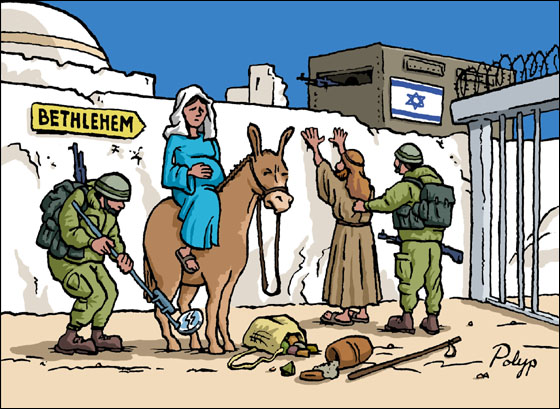 Its coverage of Israel's latest Gaza aggression is one of many examples. More on that below.

"The supporters of the Gaza-bound aid flotilla had more than humanitarian intentions (in mind). The Gaza Freedom March made its motives clear in a statement before Monday's deadly confrontation: A violent response from Israel will breathe new life into the Palestine solidarity movement, drawing attention to the blockade."

In other words, the editorial outrageously suggested activists wanted violence, provoked it, and welcomed it when it came. In fact, they wished only to deliver vital humanitarian aid peacefully. Knowing Israel's likely response, they risked their lives heroically doing it. The Times portrayed them as agitators.

In 2010, a Jonas Xavier Caballero University of Pittsburgh honors thesis titled, "The Impact of Media Bias on Coverage of Catastrophic Events: Case Study from the New York Times' Coverage of the Palestine/Israel Conflict," focused on Times reporting on Israel's Cast Lead Gaza war.

Three weeks of premeditated incursions and terror bombings caused mass deaths and vast destruction. Not according to the Times, however.

Its coverage "manifest(ed) media bias toward Israel...." Caballero "examined (it) within a context of media manipulation, misrepresentation, framing, slant, and linguistic determinism."

Extreme "distorti(ion of) the facts....present(ed) a picture that portrays Israel" as victim, not aggressor. Caballero examined 91 Times articles and editorials from December 27, 2008 (when conflict began) to January 18, 2009, plus another week for corrections and more coverage.

He concluded that Times pro-Israeli reports increased throughout the conflict. It was "deplorable," he said, adding:

Its "practice of distorting its coverage to present Israel in a favorable light represents an abuse of freedom of the press in the United States."

"The Times' history of media bias, agenda setting, and group (mis)representation seeks to support the Israeli narrative by omitting facts on the ground while demonizing the Palestinians."

"The marker of terrorism, which is habitually attached to Palestinians in news coverage, to the 'exclusion of its Israeli counterpart,' shows how 'normal/deviant dichotomies are constructed by and subsequently embedded within the news.' This is particularly true with regard to the Times' coverage of the conflict."

Cast Lead was Israel's worst atrocity since the June 1967 Six Day War. Friday, Saturday, and Sunday Gaza terror bombings is the worst one since Cast Lead. But not according to Times coverage. Once again, Israel is victim, not villain.

This week, Jodi Rudoren took over as Times Jerusalem bureau chief. Like others before her, she's Jewish. They include Ethan Bronner (replaced after reports exposed his conflict of interest), Steven Erlanger, James Bennet, and Deborah Sontag beginning in August 1998.

"Why does the New York Times consistently send Jewish journalists to head their central office in the Jewish state," asked the Post?

It doesn't fill other foreign correspondent positions with ethnic nationals. Why Israel? The Post suggested it's because Times Ochs and Sulzberger controlling families were Jewish. In 1992, Arthur Ochs Sulzberger, Jr. succeeded his father as publisher and board chairman.

"In choosing Jewish journalists to lead in Jerusalem, the Times" subscribes to its founding families' beliefs." Yet, claims the Post, doing so "affirms not just the belief that Jews are not different, but that they cannot be different."

Chew on that for meaning. The Post later said Jews were sent "to report in a most un-Jewish way," when, in fact, their bias is blatantly one-sided.

Moreover, whether or not Jews fill Jerusalem bureau chief roles or elsewhere reporting on Israel, they'd better better do it favorably, no matter how egregious its crimes. Otherwise they'll be replaced and likely fired.

Neither threatened Israel now or earlier. The Times, however, regurgitated the official lie about Israel "thwart(ing) a terrorist strike that the militants were planning against Israelis from across the border in Egypt."

It also falsely claimed both men were involved in previous attacks on Israel. Unexplained was that its authorities released Hanani from wrongful imprisonment last October as part of the Shalit prisoner swap deal. Instead it said he recently traveled to Jordan, Egypt, and Gaza. Doing so implied it was to plan new terror attacks.

The Times also lied, saying "Israel's first airstrike....came soon after Gaza militants fired two rockets into southern Israel." In fact, calm prevailed until Israeli aircraft struck. Gazans responded defensively. Under international law, it's their right, no matter how unmatched they are against its powerful adversary.

Also not explained was that all Israeli attacks are premeditated. Innocent civilians are killed, including women and children. At times, they're willfully targeted. Attacks often occur after calm periods. Israel needs instability and violence to claim justification for its crimes of war and against humanity.

Palestinians are victims, not aggressors. Resistance groups are heroic, not terrorists as calling them "militants" implies.

In addition, The Times quoted Israel's military spuriously claiming it "does not seek an escalation in the region," but stands ready to protect its citizens "with strength and determination (against) terrorist" activity.

On March 10, both writers headlined, "Violence Continues for Israel and Militants," saying:

By implication, Israel's victimized by Palestinian instigated or planned violence, when, in fact, precisely the reverse is true. But you'd never know it from Times articles, commentaries and editorials.

Like Obama and complicit rogue US officials, Netanyahu's a scourge on humanity, a war criminal, a killer unleashing terror bombings to incite violence and instability. At a Sunday cabinet meeting, he said:

"We have collected a high price from them and we are still collecting more. We will continue to operate as long as it is necessary."

"PCHR reiterates condemnation of these crimes and expresses utmost concern over such escalation."

It also warned about aggravating dire humanitarian conditions in Gaza. The entire population's affected. It called on "the international community to immediately take an action to stop such crimes."

In addition, it cited the obligation of Fourth Geneva's High Contracting Parties to fulfill their obligations under its provisions.

Article 1 stipulates they "undertake to respect and to ensure respect for the present Convention in all circumstances."

Article 146 requires they prosecute persons responsible for grave Convention breaches. Under Article 147 and Protocol I to the four Geneva Conventions, they're war crimes. It's long past high time Israel was held accountable.

Also on March 10, a Euro-Mediterranean Observatory for Human Rights (EMOHR) press release called the "assassination of wanted people" a blatant violation of international law. It described it as a murder outside the law without trial.

"The brutal murder of suspected individuals is a disgrace to a country that claims to be civilized and democratic, even in the case of armed confrontation."

"The IDF and the Shin Bet security....started it....(T)hey carry out targeted killings whenever they can, and not whenever it is necessary."

Levy called necessity when done against "ticking time bombs en route to carry out their attacks. In any event, such a vague standard no longer applies."

In 2006, Supreme Court President Aharon Barak prohibited these killings as "deterrent(s) or punishment." Killing is killing. Committing it is lawless, except defensively in response to attacks.

No one attacked or threatened Israel. Palestinians want calm, not violence. They only respond defensively, despite falsified reports saying otherwise. Levy called Israel's explanation "convoluted." It was also spurious to claim justification for premeditated cold-blooded murder.

So far, at least 21 Palestinians died, including children. No Israelis, but imagine if it was reversed. Levy suggested Cast Lead II and regional war would follow. "But the killing of (21) Palestinians is allowed, eliciting just a yawn."

That's the way it is "in this insane asylum....Way to go, IDF!" It operates on the principle of stopping killings by committing more of them.

Ehud Barak calls the IDF killing machine "the most moral army in the world." Murdering 18 Gazans and similar past incidents reveal its true face. Morality's not in its vocabulary and never was!

Highly-Educated Americans Are By Far The Most Closed-Minded; Gallup