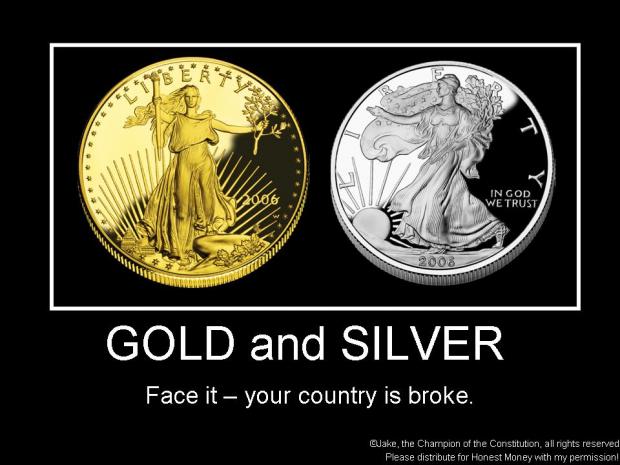 Do you own enough gold and silver for what lies ahead?

If 10% of your total investable assets (i.e., excluding equity in your primary residence) aren't held in various forms of gold and silver, we at Casey Research think your portfolio is at risk.

After speaking at the Cambridge House conference last month and talking with many attendees, I came away convinced that most investors fall into one of two categories: those that hold an abundance of gold and silver (which tends to be physical forms only), and those with little or none. While both groups need to diversify, I'm a little more concerned about the second group. Here's why.

Regardless of what you think will happen over the remainder of this decade, one thing seems virtually certain: the value of paper money will be affected, perhaps dramatically. Even if the economy slips into deflation, the deflation wouldn't last long. A panicked Fed would print to the max and set off a wild rise in prices. This is why we're convinced currency dilution will not only continue but accelerate.

Let's take a look at what's happened so far with the value of our currency vs. gold, after accounting for the loss in purchasing power.

Both the US and Canadian dollar, after adjusting for their respective CPIs, have lost about a quarter of their purchasing power just since 2000. Concurrently, gold has increased dramatically in buying power, far outpacing the effects of inflation.

This is the core reason why I'm convinced we should hold our savings in gold and silver instead of dollars. Let's take a brief look at how gold and gold stocks might perform if the economy takes a turn for the worse…

What If We Enter a Recession or Depression?

Mayan prophecies aside, many of our panelists last month, including most of the senior Casey staff, believe economic, monetary, and fiscal pressures could come to a head this year. The massive build-up of global debt, continued reckless deficit spending, and the lack of sound political leadership to reverse either trend point to a potentially ugly tipping point. What happens to our investments if we enter another recession or – gulp – a depression?

Here's an updated snapshot of the gold price during each recession since 1955.

Clearly, one should not assume that gold will perform poorly during a recession. Even in the crash of 2008, gold still ended the year with a 5% gain. And with the amount of currency dilution we've undergone since that time, it seems more likely gold will rise in any economic contraction than fall. Indeed, if the response of government to a recession is more money printing, precious metals will be a critical asset to have in your possession.

Even if the gold price ends up flat or down this year, the CPI won't. Gold's enduring purchasing power is why we hold the metal.

How about gold stocks?

In spite of the debilitating 1970s that suffered from stagflation, price controls, three recessions, and the Vietnam war, gold producers rose over 600% while the S&P was basically flat. And that includes a roughly 65% fire-sale correction, much like we saw in 2008. To be clear, gold and silver stocks won't be immune to selloffs if a recession or worse temporarily clobbers our industry. But in the end, we're convinced they will prevail.

Don't lose patience with, or confidence in, your gold holdings. What happens to the price over any short period of time is only one chapter in the book of this bull market, and we think you'll be happy by the time that last chapter is written.

[For more information on how to invest in gold, download our free report: 2012 Gold Investor's Guide.]