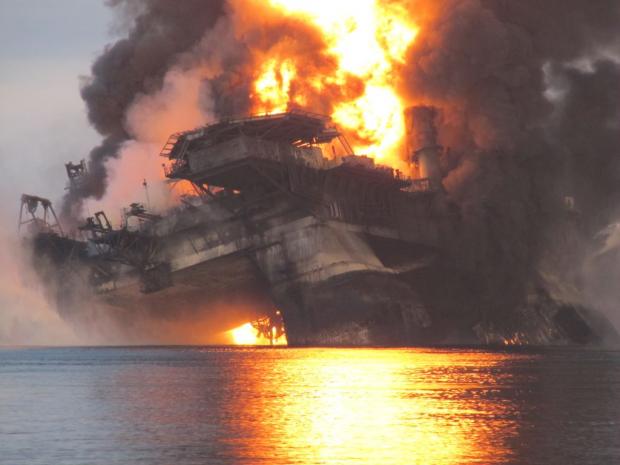 April 20 marked the two year anniversary of BP's Gulf of Mexico disaster. Until Fukushima Daiichi's catastrophic nuclear meltdown, it was the largest ever environmental calamity.

It's devastated the lives of millions of area residents. It contaminated America's Gulf. Nothing in it's safe to eat. The incident's been plagued by coverup, denial, and Obama administration complicity to assure nothing slows hazardous deep water drilling.

"Eyeless shrimp and fish with lesions are becoming common, with BP oil pollution believed to be the likely cause."

"And in my 20 years working on red snapper, looking at somewhere between 20 and 30,000 fish, I've never seen anything like this either."

He's not alone. Gulf fishermen, seafood processors, and other scientists report "disturbing numbers of mutated shrimp, crab and fish that they believe are deformed by chemicals released during BP's 2010 oil disaster."

"Along with collapsing fisheries, signs of malignant impact on the regional ecosystem are ominous: horribly mutated shrimp, fish with oozing sores, underdeveloped blue crabs lacking claws, eyeless crabs and shrimp – and interviewees' fingers point towards BP's oil pollution disaster as being the cause."

Seepage is common wherever offshore drilling occurs. According to University of California's Ira Leifer, "From what I've seen, this new oil and sheen definitely seemed larger than typical natural (Gulf) seepages...."

BP, of course, denies it's from Macondo. Throughout 2010, the company misreported repeatedly. Initially it said 1,000 barrels a day were leaking, then 5,000, then larger volumes still well below actual amounts. Estimates ranged up to 100,000 or more daily barrels.

For months, company officials grossly downplayed the severity of the crisis. Coverup and denial continues. Contaminated areas are vast. America's Gulf may never fully recover. Neither will millions of area residents.

Gulfport, MS community leader Derrick Evans addressed BP's April 2012 shareholders meeting. "The oil is not gone," he said. "The general perception is that BP made a mess and BP did a big cleanup and everything is all fine. Nothing could be further from the truth."

Some communities lost their way of life entirely. Others face uncertain futures. Many residents are sick and depressed. They've gotten precious little help. ISS produced its report cooperatively with Bridge the Gulf Project and the Gulf Coast Fund. They focused on three  areas in particularly hard hit communities:

Thousands of fishing boats were idled. Many over-indebted fishermen shut down entirely. Local groups try helping best they can. They need federal and BP help not forthcoming.

Residents report alarming numbers and types of illnesses. Clearly they're toxic oil and dispersants related. Organizations like the Louisiana Environmental Action Network try to help. It's not enough. Much more is needed.

Overall, recovery is an unfulfilled dream. Achieving it's barely begun. BP turns a blind eye. Washington largely does the same. The suffering of millions persists.

Since 1977, it's been "the nation's leading whistleblower protection and advocacy organization." It's also on the BP story. It's been investigating it since last summer. Whistleblowers report disastrous health tragedies.

Sometime this summer, GAP will release its report on how bad. Numerous ailments are known. Many thousands experience everything from skin irritation, vomiting, and rectal bleeding to kidney, liver, central nervous system and brain damage, hypertension, miscarriages, birth defects, and lesions.

Expect an eventual epidemic of cancers and other serious diseases. Expect pathetically little federal or BP help. The oil giant's settlement provides no healthcare. Accepting it means foregoing the right to sue.

Dangers they pose depend on length and amount of exposure. Children, pregnant women, the elderly and infirm are most vulnerable. No one's immune. Drinking toxic water or eating contaminated seafood assures any number of current and future health problems.

Blame it on America's rage to drill and irresponsible oil giants like BP. They do it recklessly with no regard for worker safety, environmental protection, or human health.

The company's known for having the industry's worst safety and environmental record. It's responsible for numerous willful negligence incidents. Some cause deaths and injuries. All harm human health and are environmentally destructive.

Only profits matter, not social responsibility or legal obligations. BP's a serial scofflaw. Regulatory laxity and political Washington complicity let it pollute freely with impunity. Once a violator, always one, and it goes way beyond BP. America's a scofflaw's paradise.

Eco-Watch.org "located an eyewitness with devastating new information" about BP covering up a Caspian Sea blowout. Rig workers back the account.

Witnesses told Palast they were evacuated from BP's platform as it filled with dangerous methane. They confirmed:

"(T)here was mud (drill-pipe cement) blown out all over the platform." The cement cap couldn't hold high-pressure gases. They "engulfed the entire platform in methane gas."

Palast learned that "BP failed to notify the International Association of Drilling Contractors (IADC) about the failure of the cement....Notification would have alerted Gulf cement contractor Halliburton that the process of adding nitrogen to cement posed unforeseen dangers."

Cement casing cracked apart in the Caspian. BP promoted "Blow-Out Preventers (BOPs) as a last line of defense in case of a blow-out. But if the casing shatters, the BOPs could be useless."

BP went to "extraordinary lengths" to conceal the first incident. Revealing would show replicating it in the Gulf was "not an unexpected accident but could be considered negligent homicide."

EcoWatch editor Stefanie Penn Spear said BP negligence caused the "biggest oil spill in US history. It entirely turned the Gulf Coast economy upside down and threatened—and continues to threaten—the health and livelihoods of the people in the Gulf region."

How can something this major be concealed, asked Palest. He cites "pay-offs, threats, political muscle and the connivance of the Bush Administration's State Department, Exxon and Chevron." Obama officials bear equal guilt.

Scofflaws are free to pollute and harm human health. One disaster follows another. Only profits matter. Recidivism is commonplace. A culture of irresponsibility assures it. So doesn't bipartisan political complicity.

"What the gulf spill has taught us is that no matter how bad the disaster (and the environmental impact), the potential consequences have never been large enough to dissuade BP (or giants in all industries) from placing profits ahead of prudence."

As long as Washington remains corporate occupied territory, nothing ahead will change. Big money runs America. What it says goes. Politicians and regulators salute and obey. It's the American way.

In a fair world, without government interference, profit comes from pleasing customers. The more a company pleases customers, the more profits it earns. Many enterprises can be dangerous but if they were to dangerous they wouldn't exist.