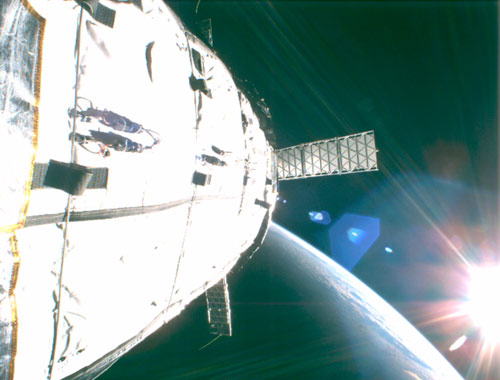 According to Bigelow Aerospace’s President and Founder, Robert T. Bigelow, “We’re very excited to be working with our colleagues at SpaceX to present the unique services that our two companies can offer to international clientele. We’re eager to join them overseas to discuss the substantial benefits that BA 330 leasing can offer in combination with SpaceX transportation capabilities”.

The BA 330 is a habitat that will provide roughly 330 cubic meters of usable volume and can support a crew of up to six. Bigelow Aerospace plans to connect two or more BA 330s in orbit to provide national space agencies, companies, and universities with unparalleled access to the microgravity environment.

“SpaceX and BA have a lot in common. Both companies were founded to help create a new era in space enterprise,” said SpaceX President Gwynne Shotwell. “Together we will provide unique opportunities to entities -- whether nations or corporations -- wishing to have crewed access to the space environment for extended periods. I’m looking forward to working with Bigelow Aerospace and engaging with international customers,” Shotwell explained.

SpaceX’s Dragon spacecraft will be capable of carrying seven passengers to orbit. With the company’s Falcon family of rockets, SpaceX is working to create the world’s safest human spaceflight system.

The companies will kick off their marketing effort in Asia. Representatives from Bigelow and SpaceX will meet with officials in Japan shortly after the next launch of the Falcon 9 and Dragon spacecraft.

SpaceX designs, manufactures and launches the world’s most advanced rockets and spacecraft. With a diverse manifest of launches to deliver commercial and government satellites to orbit, SpaceX is the world’s fastest growing space launch company. In 2010, SpaceX became the first commercial company in history to put a spacecraft into orbit and return it safely to Earth. With the retirement of the space shuttle, the SpaceX Falcon 9 rocket and Dragon spacecraft will soon carry cargo and astronauts to and from the International Space Station for NASA. Founded in 2002 by Elon Musk, SpaceX is a private company owned by management and employees, with minority investments from the Founders Fund, Draper Fisher Jurvetson, and Valor Equity Partners. The company has over 1,700 employees in California, Texas, Washington, D.C., and Florida. For more information, visit spacex.com.