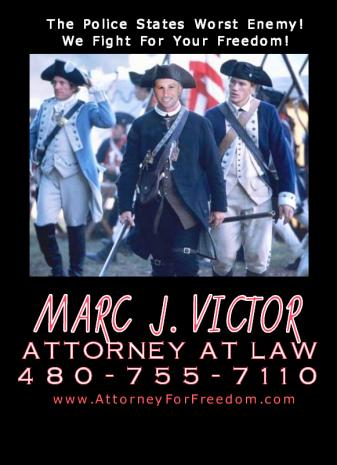 Friend and Freedom Summit partner of FreedomsPhoenix' publisher, Ernest Hancock ( full disclosure :) filed the required paperwork this afternoon to seek the Libertarian nomination for US Senate 2012 to appear on the ballot in the General Election.
The Arizona Libertarian Party searched for a quality candidate to represent them in this high profile race and Criminal Defense Attorney Marc J. Victor has agreed to articulate a Hard Core - No Compromise libertarian philosophy and defend the definition of the word "libertarian" for Arizona residents ( and the rest of the planet that will be paying attention )
For those of you that know Marc and Ernie... just let your imaginations soar :)

This may be the last year that this method for gaining General Election ballot status this late in the process is allowed... for just this "surprise" reason. Marc still needs to get 133 Write-in votes in the August 28th 2012 Libertarian Party Primary Election and be the one candidate with the most votes (no one else has yet to file). This task is of little concern to us, but what is of concern has been our past need to file lawsuits against the Maricopa County Elections Department to force them to 'COUNT THE WRITE IN VOTES'. Soooooo we'll be all over this part of the process from the beginning this time (YES... it's that bad here). The other counties have yet to be a problem.
Once certified for the General Election Ballot (by September 10th), the starting pistol will sound for a sprint. Dates for Early Balloting etc. will take a back seat to the 7 weeks of volunteer activism in support of real libertarian principles in the State of Arizona... and we are very creative when it comes to this!
In the meantime Marc and his campaign staff will be getting the website ready and stocked with all of his great articles, videos, radio and television show interviews, endorsements and accomplishments.
I (Ernest Hancock) will have nothing to do with the campaign (just like with the Ron Paul R3VOLution) and will remain free to do as I wish with whomever wishes to express themselves freely without limits.
Marc Victor will be attending the 2012 FreedomFest in Las Vegas, NV this weekend as a vendor for his law practice. Please stop by to say hello if you are attending.

(Oh, and there will be Patriot ACT voting, Military Detention supporting Warmongers in the race to help with the fun)

5 Comments in Response to Marc J. Victor files as Libertarian Candidate for Arizona's US Senate

We can clean this whole fascist/socialist Government up if we do 2 things:

1. Get a bunch of our people elected into Government offices all over the place;

2. Continue to become stronger in the things like http://teamlaw.net/Government/usmap.htm. Read and consider the details here - what is really going on in our nation.

You should have seen the sparkle in Ernie's eyes Friday night when he told me the story of getting Marc to run.

I can hear the Trolls now...

This is truly a fresh start and new beginning that we need.

Good luck to all..