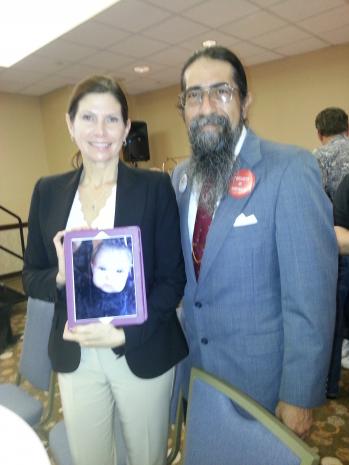 Ed Vallejo reporting - Tampa, Fla.
After having been in Florida for three days, this is the first chance I've had to get online and write anything - other than an e-mail to the Phoenix Ron Paul MeetUp late last night.
As I look out my window I see Tropical Storm Isaac moving away from me in the distance, and somehow I don't percieve it of coming back.  Others don't think the same way I do obviously as they advised us at the 'Governor's Breakfast' that due to 'possible gale force winds' it would be safest if we would all stay in the hotel all day.
It's funny that every thing possible to keep Delegates from attending the opening gavel at the RNC this afternoon (I was told if I wanted to go there were no busses and I would have to provide my own taxi) from not passing out our credentials to reducing the time convened for today's 'official' activity which is to open the Convention, start the 'Debt Clock', and recess 10 minutes later.  If it wasn't for the Debt Clock, they might have suspended business until Thursday's coronation! (The Republican Party likes to put the spotlight on the current Administration's spending by counting the amount of debt created in the short time the Convention runs).
It doesn't really matter - and I'll tell you why in my next report - which will be on Ernie's show as soon as I post this article.  Listen in.
Ed
p.s. photo is of California Congresswoman Mary Bono-Mack who was a speaker, and the photo she holds is Sonny's only Grandchild, Sonny Junior.

1.  My mistake - with the time difference Ernie's show was ending when I called.  After review of my schedule for tomorrow, I think I will be on the show - that is IF they don't change things AGAIN...

2. Someone I know got a text from another Delegation saying there WOULD be a roll-call vote at this afternoon's session, along with 2 other pieces of business.

Rand Paul To Campaign For Trump In New Hampshire Primary

Melania Trump, once a reluctant campaigner, is hitting the trail