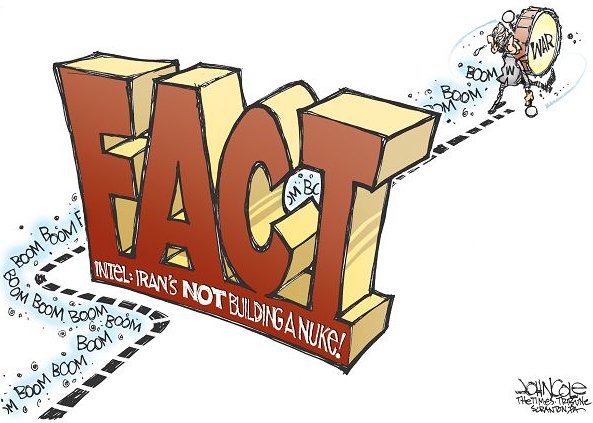 Beating Up on Iran and Syria

He, Netanyahu, and other hardliners reflect buster, not bite. Instead of cooling tensions, they heighten them. They'll do nothing without Washington's permission and active cooperation. Inflammatory rhetoric substitutes for intentions.

Other Obama priorities take precedence. Ousting Assad comes first. Scrambling for Africa's resources is planned. Iran matters most of all. It can wait until other objectives are resolved.

Israel is "rotten on the inside," said Jazayeri. Hezbollah embarrassed the IDF in 2006. Pillar of Cloud fell short. "The Zionist regime is not capable of engaging in any serious war."

Tehran has more than enough military might to give Israel pause about attacking. It's population is large. It's territory is vast. Israel is tiny by comparison. It's vulnerable.

Israeli cities could be ravaged. Thousands of deaths and injuries would follow. Its nuclear sites could be destroyed. Contamination would be widespread.

"During one of the practices of the second day of the drills, aggressive forces launched a cyber attack against the computer network of defensive forces in order to infiltrate the network and hack information or spread viruses."

It detects "cyber infiltration and immediately takes necessary measures to counter them."

Air defense system Raad (Thunder) weapons were tested. It fires missiles with a 50 km range. They can hit targets at 22,000 meters. Torpedoes, underwater weapons, and surface-to-surface rockets were successfully fired.

Defensive skills were honed. Iran intends to be ready in case Washington and Israel jointly attack. They'll get more than they bargain for if try.

Brahami's peace plan is no more legitimate than Kofi Annan's. Both men are ideologically pro-Western. They're imperial tools.

They urge dialogue but turn a blind eye to America prioritizing conflict. Resolution can't happen because Washington spurns it.

Fighting may continue until Syria's entirely destroyed and Assad's ousted. Body counts don't matter. Civilians are targeted. Mass destruction is strategy. So is unconscionable human misery. No relief whatever is in sight.

BBC said they killed "more than 200 civilians. Residents of Deir Baalbeh were rounded up and forced into a petrochemical plant where they were summarily executed." Women and children were included, said reports.

Syria makes its own M600 version. "Both sides….appear to have resorted to….chemical warfare." Falsified reports claim Assad used "grenades containing a gas that paralyzes lungs and causes extreme infirmity, or even death."

DF stopped short of explaining. It claims "Israel cannot count on being exempt from a poison weapons attack."

It could happen before January 22 elections. It could be a well-planned false flag attack. Israel and Washington specialize in launching them.