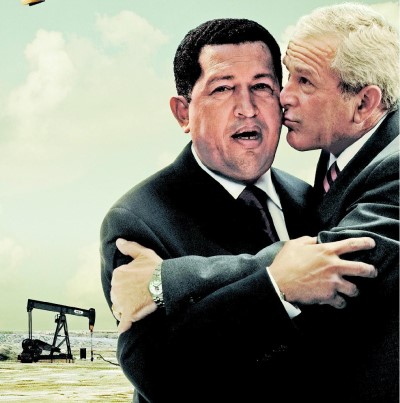 Venezuelan Leadership Up for Grabs?

On October 7, Venezuelans overwhelmingly reelected him. They want no one else leading them. He transformed national politics responsibly. He established participatory democracy and social justice.

On December 16, his United Socialist Party of Venezuela (PSUV) won 20 of 23 gubernatorial races. Bolivarianism is policy.

Venezuela is "democratic, participatory and self-reliant, multiethnic and multicultural society in a just, federal and decentralized State that embodies the values of freedom, independence, peace, solidarity, the common good, the nation's territorial integrity, comity and the rule of law for this and future generations."

All Venezuelans are "guarantee(d) the right to life, work, learning, education, social justice and equality, without discrimination or subordination of any kind."

Constitutional law "promotes peaceful cooperation among nations and further strengthens Latin American integration in accordance with the principle of nonintervention and national self-determination of the people, the universal and indivisible guarantee of human rights, the democratization of imitational society, nuclear disarmament, ecological balance and environmental resources as the common and inalienable heritage of humanity."

Duopoly power runs things. Elections are more theater than real. Ordinary people are entirely shut out. They have no say whatever.

Chavez established change. Most Venezuelans won't tolerate returning to ugly past politics. Why should they? They're led by a man who cares. They've got Bolivarian social justice institutionalized.

Fall elections afforded opposition forces no chance. They're still shut out despite uncertainty about Chavez's health. It's a worrisome wildcard.

It's unclear if Chavez is well enough to serve. His longterm health prognosis is uncertain. Medical experts disagree. No one knows for sure.

Venezuelan leadership will be for grabs if he's gone. Eventually he will be. Chavista angst reflects the possibility. They want him leading Venezuela as long as he's able. Transitioning to new leadership won't be easy.

On January 10, his new six-year term begins. His struggle to recover continues. He hopes he'll end up cancer free.

"The candidate elected shall take office as President of the Republic on January 10 of the first year of his constitutional term, by taking an oath before the National Assembly."

"If for any supervening reason, the person elected President of the Republic cannot be sworn in before the National Assembly, he shall take the oath of office before the Supreme Tribunal of Justice."

No date is specified. Dominant PSUV National Assembly members can extend Chavez's absence up to six months. Vice President Nicolas Maduro can replace him for 90 days. The NA can authorize an additional 90 days.

Hopefully by then or sooner he'll be well enough to return and serve. If not, new elections will be held to replace him. Doing so perhaps changes little short-term.

Vice President Maduro explained. He's visiting Chavez. He "decided to stay in Havana to accompany the commander and his family over the coming hours."

He said "a few minutes ago we were with President Chavez. He greeted us, and he himself talked about (post-operative) complications." They're not unusual.

"Thanks to his physical and spiritual strength, (he's) confronting this difficult situation."

Maduro expressed faith that his "immense will to live and the care of the best medical specialists will help (him) successfully fight this new battle."

He's optimistic that "the spiritual strength of the leader of the Bolivarian Revolution, and the prayers that have been felt throughout the world for his recovery, will help our President to overcome the disease."

"Everyone pray for (Chavez's) strength….to overcome this difficult moment."

On December 30, Venezuela Analysis published a government communique on Chavez's health. It states in part:

"Through this message the government of the Bolivarian Republic of Venezuela is fulfilling its responsibility to inform the Venezuelan public of President Chavez's clinical progress following his surgical intervention, carried out in Havana, Cuba, on 11 December."

"Throughout yesterday we remained vigilant as to the progress of his condition and his response to treatment. We met several times with his medical team and his closest family members."

"A few minutes ago we were with President Chavez. We greeted each other and he himself made reference to these complications."

"Commander Chavez wanted us to transmit a special end of year greeting to Venezuelan families, who are gathered together over this period throughout the country."

"In particular he wanted to send a warm embrace to the children of Venezuela, and remind them that they are always in his heart."

"The embrace was extended to all of our people, so that they see in the year 2013 with love; a year which should bring the greatest of happiness to our homeland, as well as the definitive consolidation of our independence and national unity."

Three weeks after complicated surgery, "Chavez's state of health continues to be delicate. He has presented complications that are being attended to with treatment that is not without risk."

"Thanks to his physical and spiritual strength, Commander Chavez is fighting this difficult situation."

"We trust that the global avalanche of love and solidarity expressed towards Commander Chavez, as well as his incredible strength and the care of the best medical specialists, will help our president to successfully fight this new battle."

Note: New Year's day reports say Chavez is in stable condition. He spent Monday with his daughters. Venezuelans pray for his full recovery.