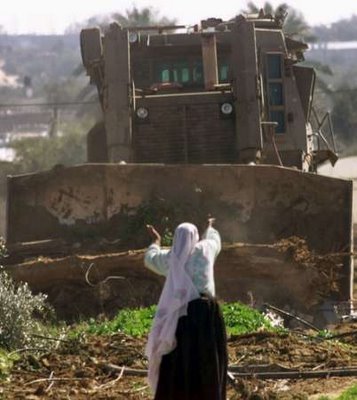 Israelis aren't smart enough to spurn him. Palestinian suffering will continue. The new year began like 2012 ended. More on that below.

On December 22, Netanyahu warned he'll hit Hamas "with a heavier blow" than Pillar of Cloud. He spoke on Israeli television.

"I suggest Hamas not celebrate," he said. Israeli state terror remains ongoing. "We inflicted a very heavy blow," he added.

"We destroyed almost all of their long-range rockets. But I'm telling you that the IDF is preparing to strike a still-heavier blow. Our account with Hamas is not closed."

He discussed late January elections. "The public knows who will deal best with the security, regional and economic challenges. The public wants a strong prime minister with a strong party behind him."

Despots say these things. Demagoguery reflects their style. It's red meat for supporters. It works so it's prioritized.

Most people aren't wise enough to understand. They don't know what they're up against. They support what they should condemn and shun.

"On election day," said Netanyahu, "the citizens of Israel will send a message not just inside the country, but to the whole."

"Ahmadinejad, Nasrallah and Mashaal will want to know one thing: has the prime minister become stronger or weaker?"

"Because to them, it means that Israel has gotten either stronger or weaker. And they understand very well that the deciding factor is whether or not the prime minister's party has gotten larger or smaller."

"If it has gotten larger. Israel has gotten stronger, and that is the message that I expect and believe the citizens of Israel will send to our enemies around the world on election day."

Settlement construction will continue, he stressed. Palestine's UN upgrade was denounced. "They are the ones who simply tore all the agreements with us to shreds, going (to the UN) unilaterally," he claimed.

"My friends, we are not going to just stand back and do nothing. Would I go and give away land so that Iran takes it over? I'm not prepared to do that."

He vowed to entirely Judaize East Jerusalem. He'll build in the sensitive E1 corridor. "What kind of future does Israel have" otherwise, he said.

"We will build in Jerusalem because that is our right." He blamed Palestinians for failure to achieve peace. He omitted saying he spurns it. He did what political rogues do best. He ranted, raved, and lied.

He had unrevealed plans in mind. He began the new year with a bang. January began like December ended. Incursions, attacks, arrests, and destruction of Palestinian property followed.

Settlers raided Qusra village. It's near Nablus. Dozens of olive trees were destroyed.  Other property was damaged. Residents were assaulted. Nearby Israeli soldiers did nothing to stop them.

Settlers also invaded Beit Ummar village. It's north of Hebron. A car and tractor were burned. Graffiti sprayed said "A good Arab is a dead Arab" and "Yitzhar revenge is on the properties today, and tomorrow will be on the souls."

Jenin residents were affected. So were nearby villages. Youths and children were arrested.

Roadblocks were installed in other Hebron neighborhoods. Vehicles were stopped and searched. Dozens of Palestinians were interrogated. Disruptive and violent methods used.

Silwan youths were arrested. It's a predominantly Palestinian village. It's adjacent to Jerusalem's Old City. It's south of the Al-Aqsa Mosque.

It's home to about 45,000 people. It's one of 28 Palestinian villages incorporated into East Jerusalem. For years, settler encroachment fueled controversy and conflict.

They're impoverished and can't afford them. Abbas treats his own people disgracefully. He's a longstanding Israeli collaborator. He bears much responsibility for Palestinian suffering. Simmering discontent threatens greater eruptions.

On New Year's day, Israeli soldiers arrested other Palestinian youths pre-dawn. They were detained for interrogation.

It reported Tamoun clashes. It said they occurred "after an undercover Israeli force….arrest(ed) a wanted militant."

An unnamed IDF spokeswoman was cited. She claimed Odeh is "suspected of being a terrorist." The Times called Islamic Jihad "an extremist organization." It's a legitimate Palestinian resistance group.

"There has been a palpable rise in episodes of stone-throwing and firebombing by Palestinians against Israeli vehicles on West Bank roads, and an increase in localized clashes between Palestinian demonstrators and soldiers."

On Monday, they added, "an Israeli bus carrying civilians south of Hebron was shot at." No corroborating evidence was revealed.

"In the meantime," said The Times, "the Israeli military says it has been trying to balance proactive counterterrorism measures - like widespread arrests of militants belonging to Hamas and other armed groups - with a policy of restraint when faced with rioters, to try to prevent Palestinian fatalities and a subsequent spiral of violence."

Times reports exclude truth and full disclosure. Lawless occupation harshness is suppressed. Palestinians are blamed for Israeli crimes. Readers are betrayed. Managed news and misinformation substitute for what they most need to know.

He focuses on Israeli/Palestinian/Lebanese/American political-economic geographies. He's involved with the Pittsburgh Palestine Solidarity Committee and Israel-Palestine Mission Network of the Presbyterian Church (USA).

"How The New York Times erases Israel's Crimes," he headlined.

TimesSpeak claims "no siege of Gaza, no occupation of the West Bank, and (no) Nakba." Palestine's democratically elected government is called militant and terrorist. Coup d'etat West Bank authority is called legitimate.

Zionism is sanctified, not condemned. It's corrosive, destructive, racist, undemocratic and hateful. It claims Jewish supremacy and uniqueness as God's chosen people.

It's repugnant, indefensible and malignant. It's contemptuous of moral and ethical values. It spurns rule of law principles.

It espouses violence, not peaceful coexistence. It favors confrontation over diplomatic conflict resolution. It prioritizes strength through militarism, intimidation, and naked aggression.

It's led by state terrorists posing as democrats. It harms Jews and gentiles alike. It menaces humanity. It should be explained and condemned, not supported.

Times reports whitewash truth. Ross calls its work "at best, delusional. At worst, it is intentionally misleading. (It) serves Israel's interests by keeping the American public in the dark about the true nature of Israel's occupation."

Fundamental civil and human rights are denied. Collective punishment is policy. So are crimes of war and against humanity.

Racist persecution persists without end. Monstrous crimes go unpunished. Netanyahu's Israel is worst of all. It's lawless, cruel, unjust and ruthless. Relief is nowhere in sight. When this ends, who knows.

1 Comments in Response to Israel's Warning

Facts About Israel from http://www.albatrus.org/english/religions/israel/facts_about_israel.htm.

Israel, the 100th smallest country, with less than 1/1000th of the world's population, can lay claim to the following:

The cell phone was developed in Israel by Israelis working in the Israeli branch of Motorola, which has its largest development centre in Israel.

Most of the Windows NT and XP operating systems were developed by Microsoft-Israel.

The Pentium MMX Chip technology was designed in Israel at Intel.

Voice mail technology was developed in Israel. Both Microsoft and Cisco built their only R&D facilities outside the US in Israel.

The technology for the AOL Instant Messenger and ICQ was developed in 1996! by four young Israelis.

Israel has the fourth largest air force in the world (after the U.S., Russia and China). In addition to a large variety of other aircraft, Israel's air force has an aerial arsenal of over 250 F-16's. This is the largest fleet of F-16 aircraft outside of the US.

According to industry officials, Israel designed the airline industry's most impenetrable flight security. U. S. officials now look to Israel for advice on how to handle airborne security threats.

Israel's $100 billion economy is larger than all of its immediate neighbours combined.

Israel has the highest percentage in the world of home computers per capita.

Israel has the highest ratio of university degrees to the population in the world.

Twenty-four per cent of Israel's workforce holds university degrees -- ranking third in the industrialized world, after the United States and Holland - and 12 per cent hold advanced degrees.

Israel produces more scientific papers per capita than any other nation by a large margin - 109 per 10,000 people -- as well as one of the highest per capita rates of patents filed.

With more than 3,000 high-tech companies and start-ups, Israel has the highest concentration of hi- tech companies in the world -- apart from the Silicon Valley, US. Israel is ranked #2 in the world for venture capital funds right behind the US.

On a per capita basis, Israel has the largest number of biotech start-ups.

Israel has the third highest rate of entrepreneurship -- and the highest rate among women and among people over 55 - in the world.

Outside the United States and Canada, Israel has the largest number of NASDAQ listed companies.

Israel has the highest average living standards in the Middle East. The per capita income in 2000 was over $17,500, exceeding that of the UK.

Israel is the only liberal democracy in the Middle East.

When Golda Meir was elected Prime Minister of Israel in 1969, she became the world's second elected female leader in modern times.

When the U. S. Embassy in Nairobi, Kenya was bombed in 1998, Israeli rescue teams were on the scene within a day -- and saved three victims from the rubble.

Relative to its population, Israel is the largest immigrant-absorbing nation on earth. Immigrants come in search of democracy, religious freedom, and economic opportunity.

Israel was the first nation in the world to adopt the Kimberly process, an international standard that certifies diamonds as "conflict free."

Israel has the world's second highest per capita of new books.

Israel is the only country in the world that entered the 21st century with a net gain in its number of trees, made more remarkable because this was achieved in an area considered mainly desert.

Israel has more museums per capita than any other country.

Israel's Givun imaging developed the first ingestible video camera, so small it fits inside a pill. Used to view the small intestine from the inside, the camera helps doctors diagnose cancer and digestive disorders.

Researchers in Israel developed a new device that directly helps the heart pump blood, an innovation with the potential to save lives among those with heart failure. The new device is synchronized with the heart's mechanical operations through a sophisticated system of sensors.

With over 25% of its work force employed in technical professions. Israel places first in this category as well.

An Israeli company was the first to develop and install a large-scale solar-powered and fully functional electricity generating plant, in southern California's Mojave desert.

All the above while engaged in regular wars with an implacable enemy that seeks its destruction, and an economy continuously under strain by having to spend more per capita on its own protection than any other country on earth.