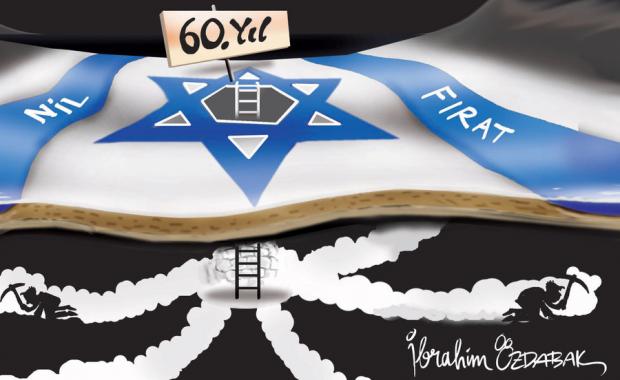 "Anyone considering voting for (him) should be aware of his party's official policies," said Haaretz. They reflect racist hate and right wing extremism. They're xenophobic, "ultra-nationalist, anti-democratic and particularly dangerous."

Habayit Hayehudi's slogan is "Something new is beginning." It's the same fascist ideology as Likud/Yisrael Beiteinu and other hardline secular and religious parties.

"We will act to make the Israeli media more balanced, not through legislation, but by exposing the reality."

"Today most senior media people are on the left side of the political map. That is a distorted situation that harms freedom of expression in the country."

Bennett deplores truth and full disclosure. He opposes left of center journalism. He criticizes all forms of "excessive activism." He's against prosecutorial/judicial efforts short of hardline.

"We will act to decrease judicial activism and the court's imbalanced interference in laws passed by the Knesset, and in central decisions by the state and army," he says.

His platform says "IDF soldiers and commanders must follow all orders fully, even if they do not like them."

"They must understand that they would be voting for a party that is much more extreme than the image it presents," said Haaretz.

"A dangerous ideology, intended to undermine democracy and the rule of law in Israel, lurks behind Bennett's smile."

Its territory comprises over 60% of the West Bank. Hardline officials consider it sovereign Israeli territory. Senior Likud members want it "officially regard(ed) as part of the state of Israel."

"Judea and Samaria must be in the hands of Israel forever," they insist. Other hardliners express similar views. They want revenge. They condemned Palestine's UN upgrade.

They spurn rule of law principles. They want settlement expansions continued. They claim Israel's right to all valued Judea and Samaria territory. They call it "state land." They want Jerusalem as Israel's exclusive capital.

They want the right to have whatever they wish. They want Palestinians marginalized and denied. They support harsh crackdowns against resisters.

"There is a certain (Palestinian) awakening. As a consequence a decision was taken within the security establishment to increase intelligence activity and arrests among members of Hamas or activists against Israel."

Third Intifada talk resonates. "Palestinian youths in the city of al-Khalil have reportedly formed a group, called the National Union Battalions, with the aim of bringing about a third intifada in the occupied territories," said Press TV.

Beatings accompany arrests. Interrogations and detentions include torture, other abuse, intimidation, and humiliation.

Dozens of Palestinians were ordered out of northern Valley areas. Around 1,000 residents are affected. They live in rural communities around Wadi al-Maleh.

They got 48 hours notice to leave. Otherwise they'll be forced out and fined.

Israel claims around 18% of West Bank land as closed military zones. Around 5,000 Palestinians live in military firing zones. Since 2010, Israel demolished 820 Palestinians homes they called illegal. Many more are targeted for elimination.

Settlers stole thousands of dunams of private Palestinian land. It's "located between border fence and the actual border with Jordan."

In the 1980s, World Zionist Organization (WZO) officials expropriated it. They claim it's State land. They lawlessly leased it to settlers.

Original owners fled during Israel's 1967 Six Day War. After Oslo and peace with Jordan, they returned. They're denied access to their own land. They're prevented from crossing border areas.

In some places, it's up to two km from the Jordan River. It's Jordan's natural border.

Until 1994, the area was abandoned. At the time, it was heavily mined. In the 1980s, Israel encouraged farmers to work nearby fields. Authorities wanted a buffer zone established. It wanted Jordanian infiltration prevented.

"There is no doubt that from a security standpoint, it is unthinkable to let someone who is not part of the security forces or an armed veteran enter the area."

Conditions now are like then. Oslo and Jordanian peace changed nothing.

"Today, Thai workers from the Israeli settlements (freely cross) the border fence into the area, while" Palestinians can't access their own land.

In recent years, lawlessly farmed land more than doubled. Since 1997, dunams increased from 2,380 to 5,064. Date orchids are prioritized. Crops are extremely valuable. Palestinians are prevented from growing their own for export.

The APL lawlessly transferred property owner rights to a Custodian of Absentee Property. Palestinian owners were prohibited from returning to their own land.

"Absentees" were declared no longer owners of property rightfully theirs.

In July 1950, The Development Authority (Transfer of Property) Law was enacted. It shielded Israel from accusations of having confiscated abandoned Palestinian land and possessions on it.

Henceforth, only transactions between Jews or Jewish entities were allowed. "Under no circumstances should (expelled) Arabs return to Israel."

Israel's Basic Law affirms that "ownership of Israel Lands, being the lands in Israel of the State, the Development Authority or the Keren Kayemet Le-Israel (KKL - Jewish National Fund, JNF), shall not be transferred either by sale or in any other manner."

Lands are defined as "land, houses, buildings and anything permanently fixed to land."

"Once again we face an Israeli policy that takes advantage of every opportunity and every pseudo-security excuse to continue exploiting and banishing Palestinian residents of the West Bank from their lands, in order to transfer (their lands) to settlers."

"It is important to remember that this is not a case of pogroms by wild settlers, and not of private piracy by the army."

"It is an intentional grab policy, with significant amounts of state funds being funneled in for that, though done so clandestinely and behind the border fence, and the people who live in the community don't have access to the lands on the other side."

"Naftali Bennett is promising to 'deal with' the media and the Supreme Court."

"Yair Shamir is promising that no new state will be established 'for a million people.' "

Israel's next government will be ruthlessly hardline. Subterfuge won't disguise it. Moderate participation will be absent. Israelis aren't wise enough to know better. They'll get "what they deserve."

Israel's true face will be more than ever apparent. Will Israelis finally understand? They haven't under Netanyahu/Lieberman. Expect no grand awakening post-election.

"When the first busload of expellees crosses the Jordan River, when the first annexation clause is legislated, when Israel's Arab citizens are forbidden to vote, and 60,000 Africans are dragged onto planes, we will have a totally different country here, and the world will respond accordingly."

Perhaps so, but not so far. Decades of US support lets Israel get away with murder. The fullness of time will decide if Washington policy changes. Until then, status quo remains solid.

Perhaps one day Israelis may decide they've had enough. Moderates ask what they're waiting for? Maybe an eventual grand awakening looms.

"We'll see what happens the day after the transfer and the night after the annexation," says Levy.

"We'll see if we really want to live in a country without journalism, without human rights groups, without the High Court of Justice, without Arabs, without (Palestinian rights), without migrants, and with apartheid as" official policy.

"We'll see what it's like to live in a state that's shunned and boycotted….We'll see if we can even sustain such a state."

Harsher than ever right wing governance will reveal Israel's true face. Change perhaps depends on giving it a chance to follow through on threats, says Levy.

Once it plays out, he believes, perhaps a new direction is possible. Until then, fascist extremism holds Israel, the region, and perhaps humanity in its grip. Near-term prospects aren't encouraging.