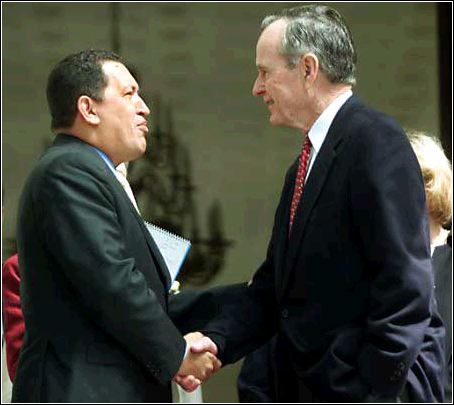 He was outnumbered eight to one. Times style debates avoid evenhanded exchanges.

Debates are an ancient tradition. Genuine ones air views freely. Beliefs are challenged. Truths are sought.

Critical thinking is stimulated. Opinions are formed. Conclusions are reached through free and open dialogue and discussion.

News and views are filtered. One-sided ones are prioritized. Government and corporate ones matter most. Truth is largely suppressed. Dissent is marginalized.

Consent is manufactured short of full and accurate disclosure. Readers aren't told what they most need to know.

On January 3, The Times headlined "The Future of Venezuela," saying:

Chavez's health raises questions. His January 10 inauguration approaches. He'll not likely be well enough to attend. Postponement can delay swearing in for later.

Key is whether he's well enough to serve or for how long. If "he steps down or dies, what will become of Venezuela," asked The Times? "Will Chavismo survive?"

"What sorts of social, economic and political issues must the next president confront? Would the nation's contentious relationship with the United States improve?"

Chavez is struggling to recover from his fourth cancer surgery in 18 months. Earlier post-operative problems were resolved.

He's fully conscious. He's getting superb care. On January 3, Granma International said he remains in "stable condition within the context of his delicate condition."

Venezuelan Minister of Science, Technology and Innovation, Jorge Arreaza, said he's "battling hard and sends his love to our people."

Chavez is vilified for doing things right. Times editors turn truth on its head. They've done it throughout his tenure. They support wealth, power, and privilege.

They ignore Chavez's responsible progressive policies. They're polar opposite destructive US ones. Explanations aren't forthcoming.

The Times matched Weisbrot against eight establishment figures. Actually nine. One article had two contributors. It's hardly a fair exchange. It's typical Times.

His article was titled "An Economic Crisis of Historic Proportions." He called Chavez irresponsible. He blames him for "mismanagement."

He ignored remarkable achievements. Popular needs are prioritized. Child mortality fell from 20 per 1,000 to 13. Unemployment dropped from 14.5% to 6.4%.

Francisco Toro is a notorious anti-Chavista propagandist. His credibility is sorely lacking. His commentaries don't approach bad fiction. The Times featured him before. It did again now.

His article is titled "Austerity Will Cement the Chavez Myth."

Like Moises and others, he grossly exaggerated Venezuelan debt. He claims his "spending-led socialism can't last." Since 1999, he's done it responsibly. Good government can continue in perpetuity. Destructive policies have bad endings.

Who'll "be left holding the checkbook when the spending must screech to a halt," asked Toro? "Chavez's possible exit is exquisitely timed: apres moi, le deluge."

"His colorless vice president (Maduro) strikes no one" as able to replace him.

Venezuelans didn't know Chavismo until it arrived. Chavez was untested. Maduro and others may respond like he did. Bolivarianism has strong popular support.

Maduro and other likeminded officials are committed to preserve and continue Bolivarian progressive initiatives.

She headlined "A Peaceful Transition Is Key." She suggests Chavez's era is passing. Saying so way oversteps. The fullness of time will decide what no one can predict with certainty near or intermediate-term.

She believes post-Chavez Latin American relations and domestic politics will be "unsettled." She says Venezuela "should remain committed to assisting the Colombian peace process."

She claims it's the region's most constructive. US military bases infest the country. They menace Venezuela and other regional countries. America is committed to war, not peace. Colombia is a close ally.

She wants relations with Cuba treated "delicately." She believes future ones are on "shakier ground." Nothing suggests it.

Venezuela has one of the region's strongest economies. Its economic growth way surpasses America and other Western countries. She calls Venezuelan economic conditions "tanking."

Imagine what she teaches students. They're best advised to avoid her.

Michael Shifter heads the Inter-American Dialogue. He teaches politics at Georgetown University's School of Foreign Service. Earlier he worked for the National Endowment for Democracy (NED). It's mandated to destroy it where it emerges. Shifter was also a former Ford Foundation staffer.

He's notoriously hostile to Chavez. He titled his article "Change Must Come Gradually." He deplores Bolivarianism and wants it replaced.

He turns Venezuelan reality on its head. He calls "reform" and "improved governance" "essential."

"Difficult choices" have to be made, he claims. Jettisoning popular popular programs should happen slowly. He's for "piecemeal" change.

"Moderation" should replace Chavismo and "grandiosity."

Venezuelans alone will decide their future. Outside meddling won't be tolerated. Bolivarian achievements are cherished. Shifter and other neoliberal hardliners want it replaced.

David Smilde is a senior WOLA fellow. He specializes in Venezuela. He and Olson headlined "Fight Crime, Respect the Poor." They claim government "oil-financed social policies are of questionable sustainability."

"Lack of transparency and accountability threaten them." Venezuela's "enormous fiscal deficit will need to be addressed."

Instead of accurately discussing Venezuelan conditions, both contributors distorted reality. They greatly exaggerated crime problems. They ignore high US levels. A previous article said the following:

US Centers for Disease Control and Prevention (CDC) data document it.

Every gun-related death leaves two others wounded. Every year, about 100,000 Americans are gun violence victims. Countless others are irreparably harmed. Nothing whatever is done to curb or prevent what's shocking and intolerable.

They operate freely. They feature outrageous propaganda. What they print and broadcast wouldn't be tolerated in America's media. Olson and Smilde didn't explain.

Patrick Duddy formerly was Washington's Venezuelan ambassador. In September 2008, he was declared persona non grata and ordered out. He's currently a Duke University Center for International Studies diplomat in residence.

His article is entitled "Chavismo Is Entrenched." He accused Chavez of "virulent anti-Americanism." He "actively worked to move Venezuela - and the region - away from its historically deep relationship with the United States."

He deplores Chavismo. Relations with America "would likely improve with the election of an opposition candidate," he says. Go slow and make it happen, he urges.

Washington covets control. It wants Chavez ousted to assure it. It wants neoliberal hardliners replacing him.

Salas admits how Chavez "s(hook) things up." He reduced poverty dramatically. Privileged Venezuelans resent him. Most Venezuelans support him.

Whatever Venezuela's future holds, its "fractured society" will continue "battl(ing) over who will benefit from the riches that" began flowing a century earlier.

Ray Walser is a veteran US Foreign Service officer. He was a State Department official for 27 years. He's a right wing ideologue.

He's a Heritage Foundation senior policy analyst. He specializes in Latin America. He prioritizes US security and related interests.

He headlined "Big Shoes to Fill Globally." Chavismo without Chavez will be "daunting," he said. "Many predict it cannot be done."

Saying appears wishful thinking. Hardball US meddling prioritizes it. Venezuelans have plenty to say on their own. They're not about to roll over for Washington. They'll fight to preserve Bolivarian gains.

Its infrastructure is "failing." Its overall "domestic challenges" are daunting.

"Chavez is known for strutting on the international stage, playing bad boy to the United States. The Ahmadinejads, Castros and Ortegas of our world could count on a hero's welcome in Caracas."

"Chavez's heir will probably be hard-pressed to cast the same giant Bolivarian shadow over the international landscape."

His successor must use it wisely. Doing so can sustain Bolivarianism longterm. Venezuelans want it no other way.

Last October, he was overwhelmingly reelected. PSUV candidates dominated regional and local elections. Nothing suggests near or intermediate-term change.

Millions got free healthcare and education for the first time. "Eligibility for public pensions tripled." In the last two years alone, "hundreds of thousands of (vitally needed) houses" were built.

Throughout Chavez's tenure, "the private sector (grew) faster than the public sector."

"If you follow Venezuela and haven't heard this, it's because (media scoundrels provide) the equivalent of a 'tea party' view of the country."

Press reports highlight 18% inflation. It's perhaps the region's highest. It's falling. It dropped from 28.2 in 2010. Responsible policies will drop it further.

If new elections are called because Chavez is too ill to serve, Chavismo support "indicates that his successor will likely win."

It shouldn't surprise. All regional centrist and left of center governments were reelected. They fall well short of Bolivarian change.

They shifted away from what James Petras calls "the golden age of pillage." Living standards improved enough to matter. They've got a long way to go.

Times editors and neoliberal hardliners deplore progressive social change. The fullness of time will decide whether Bolivarianism is sustained longterm.

It'll determine if it takes hold regionally. It'll have final say. Hopefully populism will emerge triumphant. Majorities want it no other way.

War On Western Culture: Why Continue Along Our Current Path?

War On Western Culture: Why Continue Along Our Current Invasion Path?